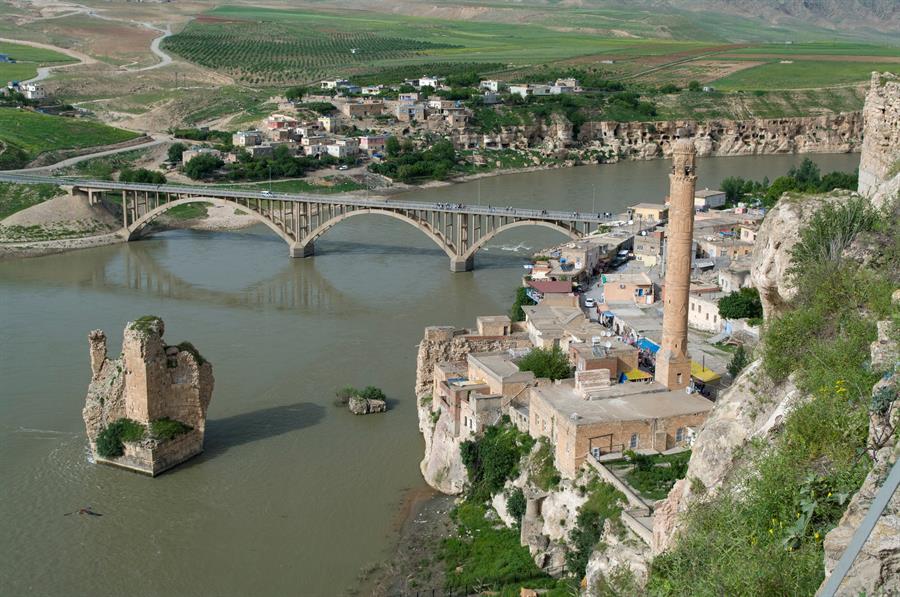 The 12,000-year-old town of Hasankeyf will be submerged as part of a dam project by the Turkish government.

Resident Ridvan Karabulut said he has been watching the landscape changing for months but is powerless to do anything to stop it. He does not want to leave and does not have anywhere to go.

More than 20 different cultures have left their mark throughout history on the small town, home to 6,700 inhabitants, which is located on the banks of the River Tigris in the province of Batman, southeastern Turkey.

Two huge stone pillars rise out of the middle of the river, the remains of a 12th Century bridge that Marco Polo used on his silk route to China.

Hasankeyf stands in a valley that houses numerous remains from Neolithic, Roman and Byzantine times.

The cliffs above the Tigris are riddled with caves and passages, and the banks of the river are a rich habitat for birds, reptiles and amphibians, which will not adapt to the reservoir.

In recent months, Turkish authorities have moved seven monuments from the location, including tombs and a 15th Century mosque – but the rest will disappear underwater when the construction of the dam is completed, which is due to be in February.

Environmental engineer Ercan Ayboga said the project is a disaster that could have stopped long ago.

Hasankeyf meets nine out of 10 possible criteria to be considered a World Heritage Site, but Turkey has never submitted the request to Unesco, he added.

Ayboga leads a group of activists that has been trying to stop the Ilisu dam project, almost 100km downstream from Hasankeyf, which is part of a plan to build 22 dams and 19 hydroelectric plants throughout the country.

He described it as a disaster for historical areas, for the environment and for the inhabitants of Hasankeyf.

According to the Hasankeyf Initiative, the Ilisu reservoir will completely or partially flood about 200 villages – making 15,000 people homeless.

It has been estimated the increase in the water level could ultimately end up affecting around 100,000 people.

Turkish authorities have built New Hasankeyf, a town with 710 homes and 100 government buildings, but many residents have said it is not enough.

Ayboga said the situation is very dramatic and that many people have lost their jobs.

He added there are not enough houses for everyone and most families have had to ask for credit to pay for a new house because it was more expensive than the home they sold to the state.

Only families who were registered in Hasankeyf before 2013 have the right to access a new home.

Young couples who have not yet married, single people or those who have always lived there but were not registered have been left homeless, Ayboga added.

This was the case for Karabulut, who will not get a house in New Hasankeyf but has to leave his home in the old city.

He said he is more concerned with work than a house.

He managed a ceramic workshop with his father, selling items to tourists but fears there will not be tourism in the new town.

In November the authorities demolished one of the oldest markets in the area and began to restrict access to the town.

The government also wants to turn the flooded Hasankeyf into a tourist attraction because part of a Roman citadel will be exposed, a project which has been criticised by locals.

John Crofoot, an urban planner and member of the group to save Hasankeyf, said Turkey does not want to depend on other countries and wants to generate its own energy but said the project makes no sense because of the environmental and historical destruction it entails.

The project, valued at €1.5 billion, is expected to generate energy for 1.3 million homes, according to Turkey’s Ministry of Environment and Urban Planning.

The Turkish government hopes the construction of the Ilisu dam could financially help inhabitants of the Batman province, which has unemployment levels of 25%, compared to an average of 14% in the rest of the country.

Karabulut said the dam could generate employment for the locals on a temporary basis – but once it is finished, they will be left without work again.

He added that residents need stable jobs, not a dam.

Crofoot questioned how the management of the Tigris will affect others countries of the region because once the dam was built, Turkey could regulate the river’s flow into Iraq.

Iraqi authorities have opposed the construction of the dam.

Last year, the flow of the river was reduced so much that inhabitants of Baghdad could cross the Tigris on foot.

Crofoot said the dam could become a weapon for Turkey as the government could control the flow of the river and affect Iraq. Its management could create diplomatic friction in the future, he added.