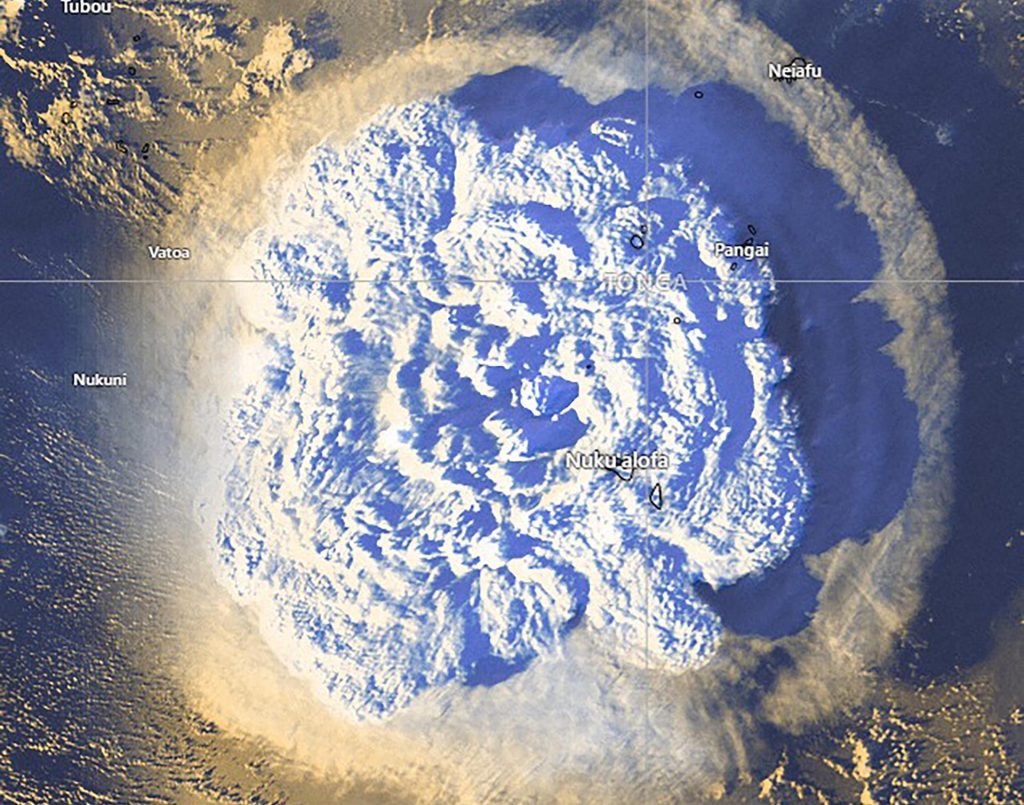 The eruption of the volcano, about 65km north of the Tongan island of Tongatapu – which caused tsunamis and three deaths and affected 85% of the country’s 107,000 population – resulted in the largest atmospheric explosion since the eruption of Krakatoa in 1883, researchers at New Zealand’s National Institute for Water and Atmospheric Research (NIWA) have found.

“The eruption reached record heights, being the first we’ve ever seen to break through into the mesosphere. It was like a shotgun blast directly into the sky,” NIWA marine geologist Kevin Mackay said.

The NIWA study determined the eruption displaced 10 cubic km of seafloor, most of it from the summit, which was deposited on the ocean floor within a 20km radius.

However, the experts have not been able to determine where around 3.2 cubic km of the material has ended up, although they think that part of it could have been lost into the sky.

“The volume of this ‘shotgun’ plume is estimated to be 1.9 cubic km of material, which has been circulating in our atmosphere for months, causing the stunning sunsets we saw following the eruption,” Mackay said.

The researchers also discovered that pyroclastic flows – which are made up of dense lava, volcanic ash and gases that can reach temperatures of 1,000°Celsius and speeds of 700kph – extended at least 80km from the crater, “perhaps as far as 100km away,” said Dr Emily Lane, NIWA principal scientist – natural hazards.

“They are also what caused both the domestic and international communications cables to break, with the domestic cable now being buried under 30m of eruptive material,” Lane said.

“The sheer force of the flows is astonishing – we saw deposits in valleys beyond the volcano, which is where the international cable lies, meaning they had enough power to flow uphill over huge ridges and then back down again.”

This is the first time that scientists have observed underwater pyroclastic flows of this magnitude, Mackay said.

The eruption on Jan 10 sent atmospheric shock waves, sonic booms and tsunami waves around the world.

“The pressure anomaly generated by this eruption supercharged the tsunami so that it was able to travel right across the Pacific and worldwide. This mechanism meant that it could travel further and faster than our warning systems expected. The Krakatoa eruption was that last time a volcanic tsunami on this scale occurred,” Lane said.

The reshaping of the seafloor also had dramatic effects on ecosystems, with “little sign of any animal life on the flanks of the volcano, in deeper water channels, and most of the surrounding seafloor. However, there were patches of abundant life that had survived the eruption on several seamounts, giving hope for recovery,” NIWA said.