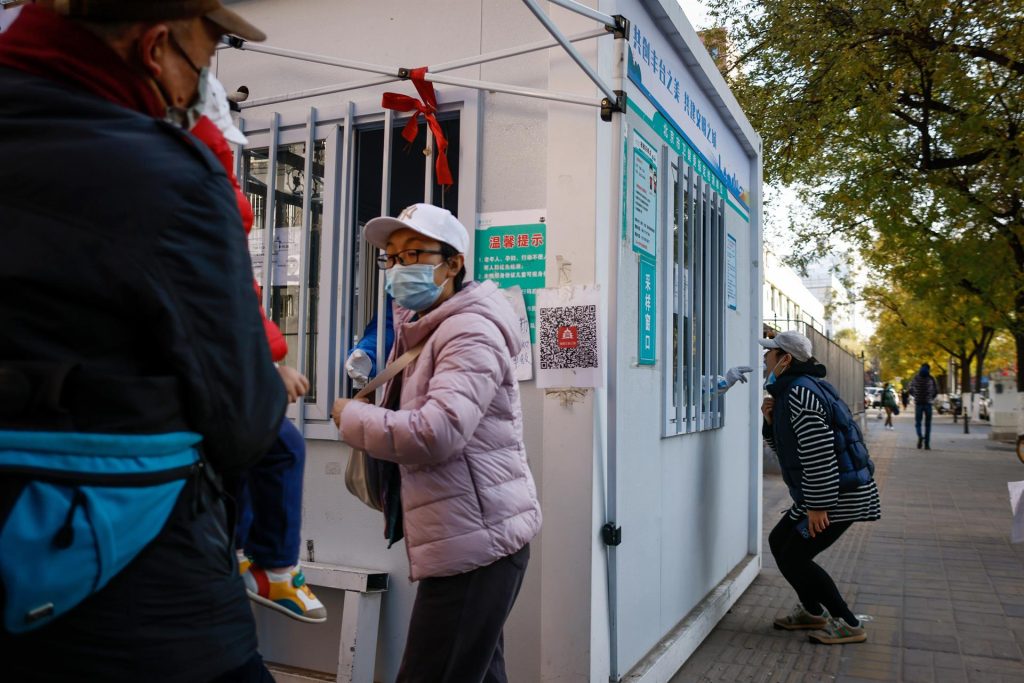 Beijing shut down schools and nurseries today after registering two Covid-19 deaths and almost a thousand new infections over the weekend – as several Chinese cities cope with outbreaks and reinstate stringent rules to deal with the spread.

Restaurants in the Chinese capital, especially in the Chaoyang business district, also closed their doors to customers – but continued to provide takeout orders today after authorities urged residents to work from home where possible.

Beijing citizens are also required to show a negative PCR test carried out in the previous 24 hours to access public places such as supermarkets, museums, parks and shopping centres.

The capital’s authorities have so far held back from imposing a city-wide lockdown, but there are an unconfirmed number of buildings in Beijing that have been placed under lockdown due to a Covid-19 case being detected within the premises.

Some 280km from Beijing, the city of Shijiazhuang in north China’s Hebei province today reported 641 fresh infections among its 10 million inhabitants.

The town made headlines a week ago when it announced it was easing zero-Covid rules by withdrawing the need to get regular PCR tests and proof of negative tests to access public places.

The news was seen by some analysts as the first step in a possible easing of China’s strict approach to the pandemic, in force since early 2020 – but anxiety soon spread among the populous city’s citizens who stocked up on medications, leading to a shortage of products in pharmacies.

Shortly after, the central Chinese cities of Guiyang and Luoyang also adjusted their PCR requirements and even Beijing closed numerous sample collection points last week – only to reopen them a few hours later due to complaints and confusion from residents whose offices kept requiring negative tests.

The southern city of Guangzhou, with a population of over 15 million, continues to deal with a Covid-19 outbreak with 10,000 new infections reported yesterday.

It is rare for a Chinese city to report thousands of new daily cases and when this has happened in the past, it has usually spelled city-wide lockdowns.

The sprawling city of Chongqing in central China yesterday recorded over 6,000 new infections among its 30 million-strong population. So far, authorities in the massive city have not ordered a total lockdown.

China’s zero-Covid policy – which consists of isolating infected citizens, strict border controls and regular PCR testing – has remained in force since the beginning of 2020, despite symptoms of exhaustion among the population in recent months that have sparked riots in cities like Guangzhou.

China recently adjusted its approach to fighting the pandemic and routine PCR tests on the entire population of a city or district were dropped.

The practice of collecting swabs of residents twice daily was also benched after the government said it lacked a scientific basis.

China’s Center for Disease Control and Prevention today reported more than 25,000 new infections from data collected over the weekend.

According to official figures, since the beginning of the pandemic, 5,229 people have died in China.