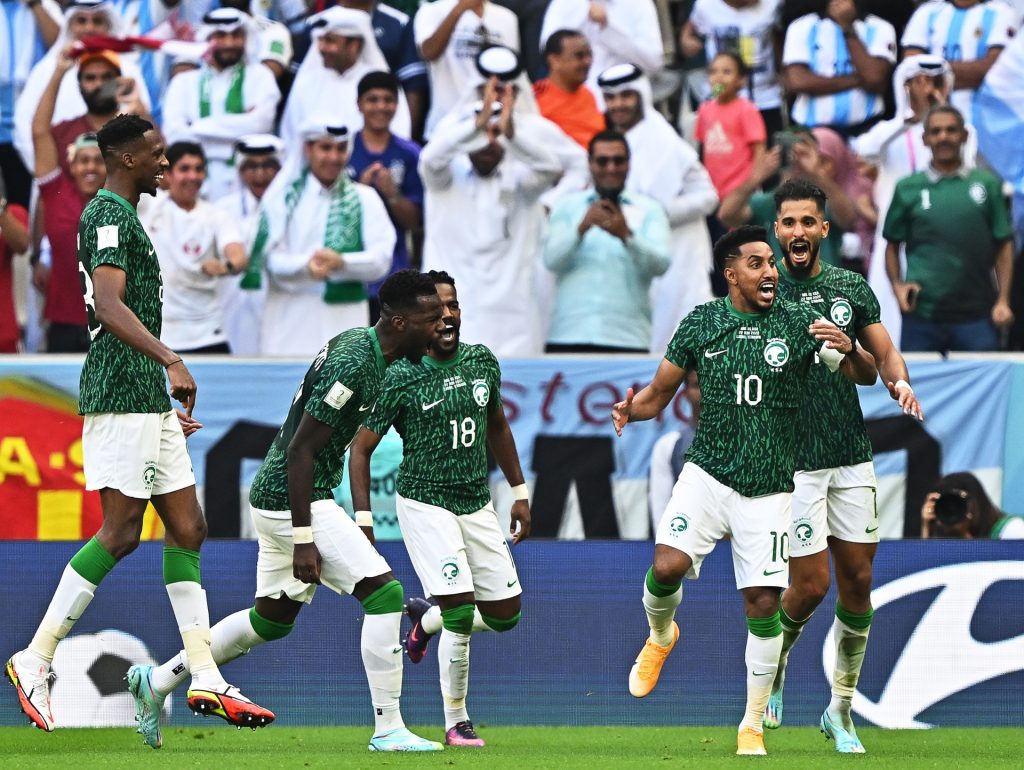 Saudi Arabia delivered one of the most stunning results in World Cup history today, defeating Lionel Messi’s Argentina 2-1 in their Group C opening match in Lusail.

The South Americans, who were undefeated in 36 matches and arrived in Qatar as one of the strong favourites to win the competition, started strongly through Messi’s early penalty and had three goals disallowed for offside during a dominant first half.

But the Saudis refused to back down, levelling the score just after the restart through Saleh Al Shehri’s left-footed strike after poor defending from Argentina.

Less than five minutes later, Saudi Arabia had turned the match on its head, as Salem Al Dawsari harried the Argentinians into another error before curling a brilliant effort past Emiliano Martinez in goal.

At that stage, most observers still expected the star-studded Albicelestes to get back into the game against a Saudi side ranked 51st in the world, but the Argentinians failed to mount any real pressure or create many clear-cut openings.

Saudi Arabia kept Argentina at bay and held on for a truly historic win that sent shockwaves through the world of football.

It was not the start Messi would have wanted in what is expected to be his final World Cup, but Argentina can turn things around when they face Mexico on Saturday evening.

Christian Eriksen’s Denmark were held to a goalless draw by Tunisia in the opening match of Group D.

The North Africans dominated the first hour of the game at the Education City Stadium but were unable to capitalise on their chances against a solid Kasper Schmeichel in goal.

Denmark’s Andreas Cornelius came close to snatching a winner in the second half but fluffed his chance with the goal gaping.

A possible Tunisian handball in injury time raised Danish hopes in Doha, only for the Video Assistant Referee (VAR) review to hand a freekick the other way, consigning both teams to the first 0-0 draw in this year’s World Cup.

Denmark and Tunisia will tussle it out for a place in the knockout stages with France and Australia.

Stepping in for the injured Karim Benzema, Olivier Giroud scored twice to power holders France 4-1 over Australia in the World Cup 2022 opener for both teams.

Giroud, 36, moved into a tie with Thierry Henry for most goals in a France shirt as Les Bleus came from behind to put everyone on notice that they are serious about becoming the first team in seven decades to win back-to-back World Cups.

Kylian Mbappe, the breakout star of the triumphant 2018 run in Russia, scored to become the first player in the history of the national team to post five World Cup goals before reaching the age of 24.

And coach Didier Deschamps will also be pleased with the performances of World Cup debutantes Adrien Rabiot (a goal and an assist) and Aurelien Tchouameni, who provided defensive stability in midfield.

France came into the tournament seemingly diminished due to injury. Deschamps had to leave Paul Pogba and N’Golo Kante – key contributors to the 2018 title – off the roster and then watched 2022 Ballon d’Or Benzema get hurt in practice last Saturday.

Poland’s talisman Robert Lewandowski had a golden chance to seal a win against Mexico in their opening Group C match but saw his scuffed penalty saved by Guillermo Ochoa of Mexico, who held on for a goalless draw.

The penalty had been awarded after an intervention by the VAR, which spotted that Hector Moreno had impeded Lewandowski as the Polish star striker shaped to shoot inside the box.

But Ochoa guessed correctly to dive to his left and palm Lewandowski’s disappointing effort to safety, sending thousands of Mexican fans wild.

Mexico were backed by huge numbers of green-clad, sombrero-sporting supporters who helped create an intense atmosphere inside Stadium 974, but they could not inspire the Tricolor to find the breakthrough in a closely fought stalemate.

The draw means that Saudi Arabia – the lowest ranked team in the group – leads the standings after they secured an historic 2-1 victory over Argentina earlier.