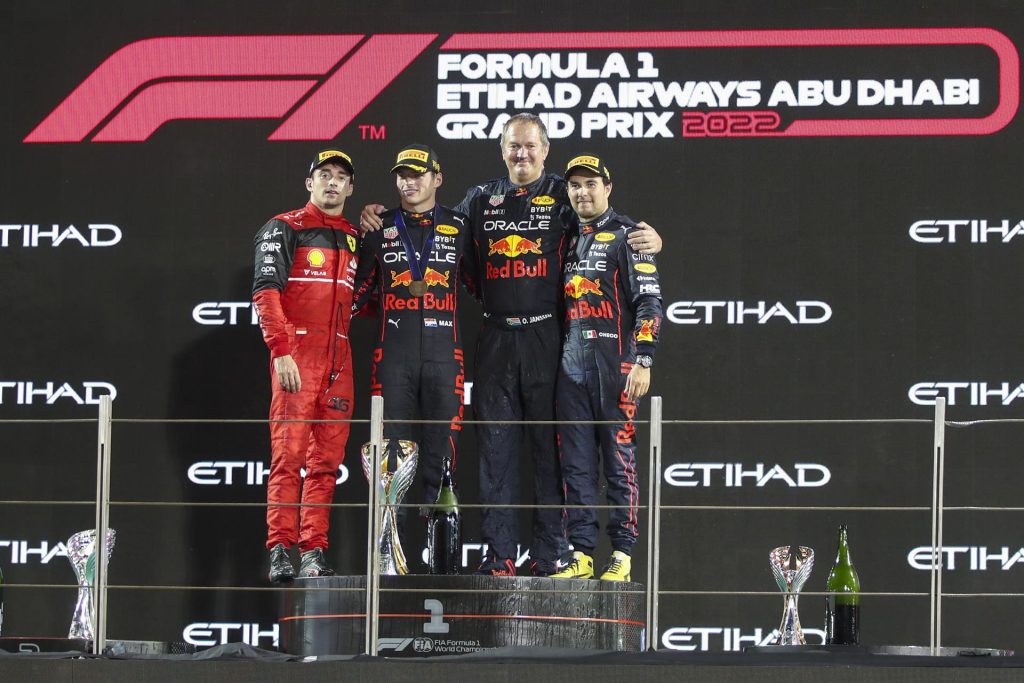 This year’s Formula One (F1) season closed out yesterday in Abu Dhabi, with yet another Grand Prix win by Dutch Red Bull driver Max Verstappen – who had clinched his second consecutive title weeks ago and led the pack all the way at the Yas Marina Circuit.

It was Verstappen’s record-setting 15th win of the season, and he also set a new record in the rankings with 454 points – surpassing Lewis Hamilton’s record of 413 points set with Mercedes in 2019.

The contest of the day, however, was that between Monaco’s Charles Leclerc, with Ferrari, and Verstappen teammate Sergio “Checo” Perez – with the former coming out in second place, three points ahead of the Mexican, who drove hard throughout the race, putting great pressure on his rival.

Although the Red Bull team had already secured the constructors’ title, Ferrari was set on denying the No 2 podium spot to Mercedes, and Leclerc’s second-place finish also ensured that he ended the season as the overall runner-up in the rankings, with 308 points to Verstappen’s 454, and besting Perez by three.

Spain’s Carlos Sainz, with Ferrari, finished fourth – edging out Hamilton, who had to withdraw late in the race with vehicle problems, in the overall rankings with 246 points to the Briton’s 240.

It was Vettel’s 299th race and he had declared it to be the last in his career, receiving tribute from the fans and his fellow drivers.

The race started in 35°C (95°F) heat and the day got hotter from there, with Verstappen, Perez and Leclerc out in front, although the Mexican early on tried to pass the Monaco driver on the inside without success.

Later on, after pit stops, Leclerc was out in front and – although Perez tried to pass him in the last few laps – the Ferrari driver hung on to cross the finish line second.