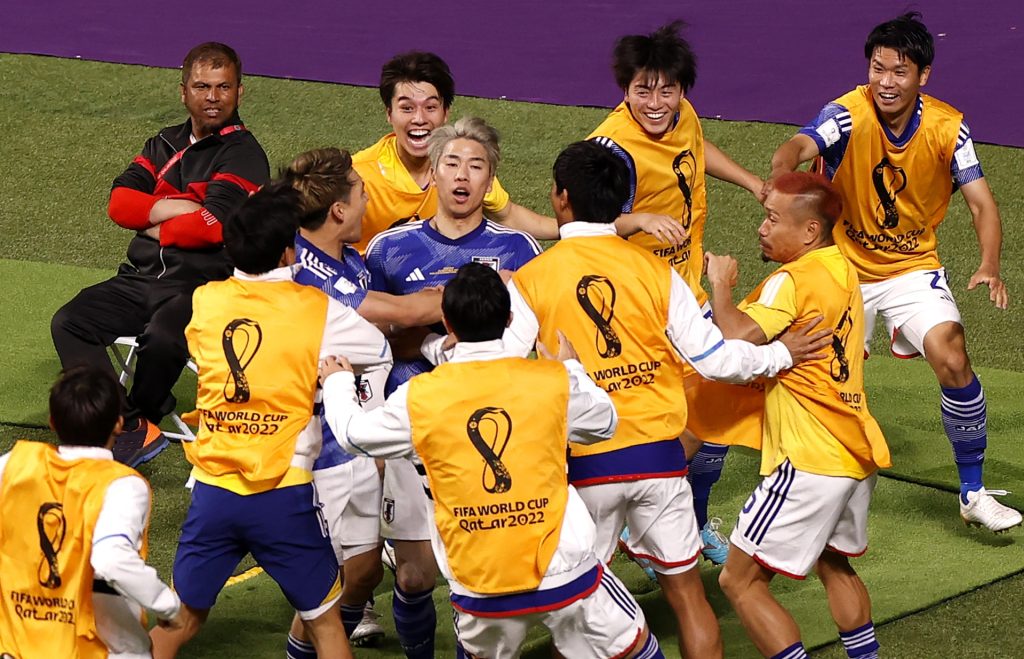 Japan scored two goals in the last 15 minutes as they came from behind to upset four-time World Cup winners Germany in their opening Group E match yesterday.

The Germans had largely controlled the match from the kick off, limiting Japan to sporadic counter attacks, and took a deserved lead when Ilkay Gundogan converted from the penalty spot after David Raum had been clumsily brought down by Japanese goalkeeper Shuichi Gonda.

But against the run of play, substitute Ritsu Doan struck in the 75th minute to cap off an incisive counter attack that levelled the score.

Germany, utterly dominant until then, were rattled, and Takuma Assano, who had also come off the bench, completed the turnaround on 83 minutes after breaking a lacklustre offside trap and driving into the box to fire high past Manuel Neuer, who was beaten at his near post.

The Germans had been on top for most of the game, peppering the Japanese goal with 26 shots and dominating with 74% ball possession, but they were unable to convert a host of chances.

Germany’s pain was compounded by the fact that Japan’s two goal scorers both ply their trade in the German Bundesliga.

In the other Group E match, Ferran Torres scored twice as Spain thrashed Costa Rica 7-0 at the Al Thumama to start their World Cup campaign with an impressive statement of intent.

Costa Rica were totally outclassed by the slick Spaniards, who passed the Central Americans off the pitch, creating chance after chance throughout the 90 minutes.

Dani Olmo got the goal feast started with an excellent turn and finish in the 11th minute, with a Marco Asensio strike and a Torres penalty sending Spain into the break 3-0.

Costa Rica had barely laid a glove on the Iberians during the opening period, and that trend continued in the second half as Torres bagged his brace 10 minutes after the restart following more poor defending from Los Ticos.

Barcelona’s Gavi became the youngest scorer at the World Cup since Pele when he got the fifth with the best goal of the night, volleying in from the edge of the area with the outside of his right foot, before Carlos Soler and Alvaro Morata added gloss to an already spectacular win.

For Group F, star-studded Belgium eked out a 1-0 win over a Canadian side making their first appearance in a World Cup since 1986.

The Belgians, ranked second in the world by FIFA, grabbed first place in Group F with 3 points, 2 better than 2018 runners-up Croatia and Morocco, who played to a scoreless draw earlier.

Though the third-place finishers in World Cup 2018 had 54% possession, the Canadians outshot them 22-9 and were by far the more dynamic squad in the first half.

Tajon Buchanan, who plays professionally for Club Brugge, won a corner and his effort off the initial kick resulted – after a VAR review – in a penalty for a Yannick Carrasco hand-ball.

Canada thought they had won another penalty after Richie Laryea went down in the box in a tangle with Axel Witsel, but the referee didn’t see it and VAR concluded that there wasn’t enough in it.

With the first half drawing to a close, a deep ball from Toby Alderweireld found Batshuayi in the area and the striker put Belgium up 1-0. It was the Fenerbahce man’s 18th goal in 25 starts for the national side.