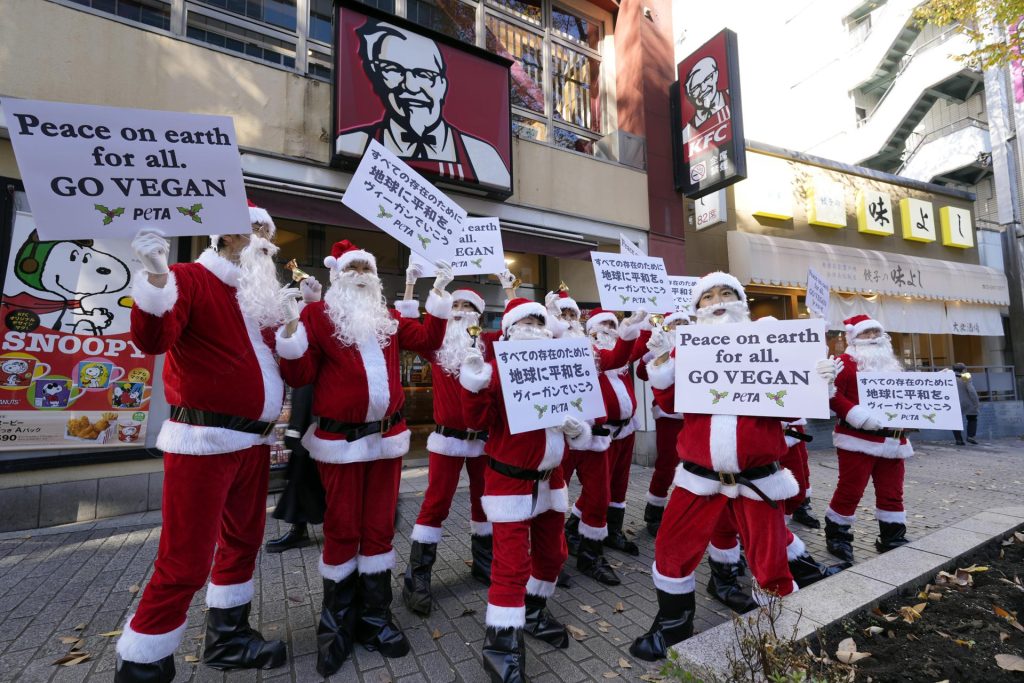 Activists dressed up as Santa Claus gathered in front of a Kentucky Fried Chicken (KFC) outlet in Tokyo yesterday demanding vegan options on the menu.

Fried chicken at KFC is one of the most popular items during Christmas in Japan.

Activists wearing Santa Claus costumes, caps and beards assembled before a KFC joint in the busy Tokyo district of Shibuya – carrying posters with slogans such as “Peace on Earth for All. Go Vegan.”

The demonstration was aimed at drawing attention to the killing of millions of chickens as part of KFC’s annual Christmas promotion, according to the Japan branch of the animal rights organisation PETA.

PETA has often criticised the ill-treatment of chickens raised in farms that supply to KFC Japan.

In February, it released videos depicting cruelty against animals in these farms linked to the American franchise.

“Almost all chickens in the meat industry spend their entire lives in total confinement, from the time they hatch until the day they’re killed,” PETA said in a statement.

“They’re cooped up in filthy sheds with tens of thousands of other birds and given less space than the size of a sheet of paper. Many of them have trouble breathing or standing upright because they’ve been bred to be abnormally large.”

For this reason, PETA demands that KFC Japan include vegan options on its menu, such as meat substitutes – produced by the company Beyond Meat – available in its outlets in the US.

In Japan, KFC records its largest sales of the year around Christmas Eve, owing to a tradition to share fried chicken – especially that of KFC – at this time, as a result of an advertising campaign launched by the Japanese subsidiary for over five decades.