Penang laksa was voted best soup and best noodle dish in the world for 2020 by TasteAtlas.

Its list of the 100 best traditional dishes in the world for this year also two other Malaysian favourites – laksa at 27th and nasi lemak, ranked 95th.

Pizza Margherita from Napoli, Italy has been voted the best world-famous traditional dish in the world. The second best is the Turkish Adana Kebab, followed by the Japanese Ramen and Peruvian Lomo Saltado.

The taste map website said the Penang laksa is a perfect blend of spicy, sweet, savoury, and umami flavours.

“Penang laksa is a popular Malaysian street food, originating from the north-western state of Penang. This hearty noodle soup is made with poached mackerel (or sardines), tamarind, lemongrass, and chilli peppers as the base ingredients.

“Other commonly used garnishes include ginger flower buds, pineapple slices, onions, mint, and shrimp paste. But, regardless of all the specific recipes, the result is always a rich and strong-flavoured dish that has earned the adoration of both locals and travellers alike. So much so, that in 2011, CNN Go ranked Penang laksa #7 in their “World’s 50 Best Foods” list – and it’s the only Malaysian dish included.”

It also described laksa i ngeneral as being characterised by its rich and spicy broth.

“This comforting noodle soup is one of the classic dishes found in many Southeast Asian countries. It was developed under the influence of different culinary traditions, which has led to the creation of numerous regional varieties that differ in flavours and ingredients.

“Two of the most famous versions are the sour, tamarind-based asam laksa and the creamy curry laksa. Especially favoured in Malaysia, Singapore, and Indonesia, laksa is usually prepared and enjoyed at hawker centres as a hearty main course.

“This quintessential Southeast Asian condiment is usually made only with spicy chilli peppers and salt. It is occasionally adapted with lime juice, onions, sugar, ginger, shrimp paste, or vinegar.”

As for the nasi lemak, it said: “No other dish in Malaysia is as famous as nasi lemak. It consists of rice cooked in coconut milk that is traditionally served with anchovies, cucumbers, peanuts, and boiled eggs. The dish is rounded up with the addition of a spicy chili paste called sambal.

“Although originally invented as a breakfast dish, soon it surpassed its original purpose and became the Malaysian national dish which can be eaten at any time. Its invention occurred from the mere necessity to exploit all ingredients which were at hand, and the popularity of nasi lemak has continually risen since the 1980s, when this farmer’s meal evolved into a dish that is frequently sold by Malaysian street vendors.

“Eventually, the dish became a comfort food staple for the majority of Malaysians. With its popularity came different variations of the dish, and nowadays chicken, fried fish, fried eggs, or even curry are served on the side of nasi lemak. It is traditionally served hot and packed in banana leaves.”

TasteAtlas contains a database of more than 10,000 traditional dishes and local food products. The ranking is based on the 63,402 valid user ratings. 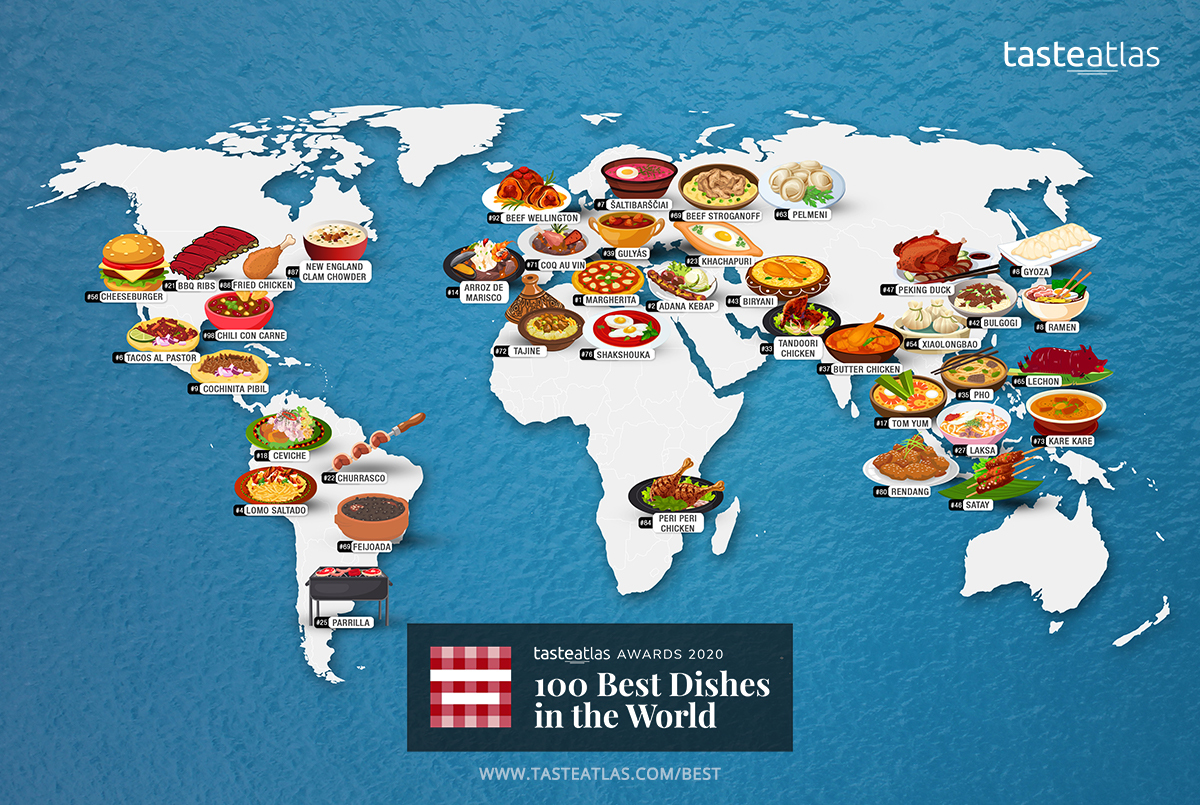