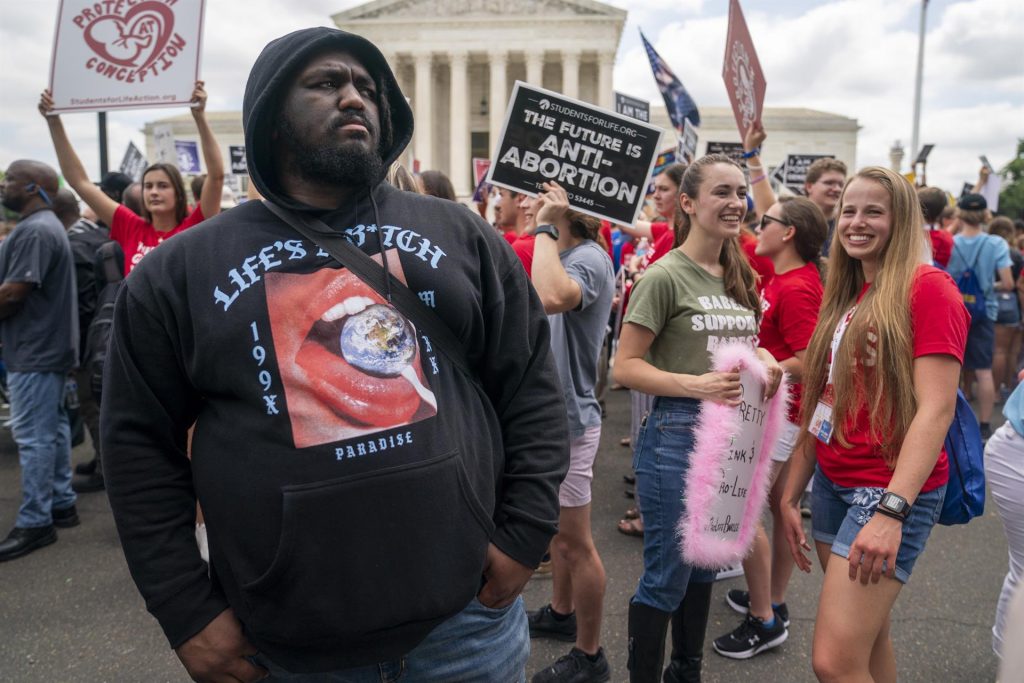 The US Supreme Court yesterday overturned the landmark 1973 Roe v Wade decision – eliminating the constitutional right to an abortion that had stood for nearly five decades – and leaving it up to the states to decide what restrictions, if any, to impose on that medical procedure.

The ruling by the conservative-majority high court in Dobbs v Jackson Women’s Health Organization upheld a 2018 Mississippi state law that banned most abortions after 15 weeks of pregnancy.

The Supreme Court ruled 6-3 to reverse lower-court rulings that had prevented enforcement of the Mississippi law and 5-4 to overturn Roe and the 1992 Planned Parenthood v Casey decision that upheld the constitutional right to abortion.

“Roe and Casey arrogated that authority. The Court overrules those decisions and returns that authority to the people and their elected representatives.”

Thomas and Kavanaugh wrote separate opinions explaining why they think Roe should be overruled.

The ruling was widely anticipated after a highly unusual leak of an early draft majority opinion by Alito in the Dobbs case – published by online news outlet Politico in May – indicated the court was poised to overturn Roe.

That opinion sparked outrage among Democratic politicians and pro-choice activists, thousands of whom have taken part in protests across the US in recent weeks.

Among other things, yesterday’s ruling found the right to abortion is not deeply rooted in US history and tradition.

It recalled that until a few years before Roe, no federal or state court had recognised such a right and that abortion had long been a crime in every state.

In 1973, when the Supreme Court nation’s highest court found in favour of Norma McCorvey (“Jane Roe”) in her suit against the state of Texas for prohibiting her from having an abortion, the procedure was only legal in 17 of the 50 states and illegal abortions were common.

But the court’s three liberal justices – Sonia Sotomayor, Elena Kagan and Stephen Breyer – wrote a dissenting opinion in which they argued the Roe and Casey rulings had struck a reasonable balance that has now been cast aside by the Dobbs decision.

The earlier rulings “held that the state could prohibit abortions after foetal viability (established to be around 28 weeks at the time of the Roe decision but now, due to medical advancements, estimated to be about 23 or 24 weeks), so long as the ban contained exceptions to safeguard a woman’s life or health,” they wrote.

“But until the viability line was crossed, the Court held, a State could not impose a ‘substantial obstacle’ on a woman’s ‘right to elect the procedure’ as she (not the government) thought proper, in light of all the circumstances and complexities of her own life.

“Today, the Court discards that balance. It says that from the very moment of fertilisation, a woman has no rights to speak of,” they wrote. “With sorrow – for this Court, but more, for the many millions of American women who have today lost a fundamental constitutional protection- we dissent.”

Roberts, for his part, wrote in a concurrence that he backed the decision to uphold the Mississippi law, stating “he agrees that the viability line established by Roe and Casey … never made any sense.”

But he said the court had gone too far in eliminating the constitutional right to an abortion.

“The Court’s decision to overrule Roe and Casey is a serious jolt to the legal system – regardless of how you view those cases. A narrower decision rejecting the misguided viability line would be markedly less unsettling, and nothing more is needed to decide this case.”

“The health and life of women of our nation are now at risk,” the president said. “Make no mistake. This decision is the culmination of a deliberate effort over decades to upset the balance of our law.

The House of Representatives speaker Nancy Pelosi echoed those remarks.

“Today, the Republican-controlled Supreme Court has achieved the GOP’s dark and extreme goal of ripping away women’s right to make their own reproductive health decisions,” Pelosi said.

“Because of Donald Trump, Mitch McConnell the Republican Party and their supermajority on the Supreme Court, American women today have less freedom than their mothers.”

Trump nominated Gorsuch, Kavanaugh and Barrett, while McConnell used his power as Senate Majority Leader to block then-President Barack Obama’s high-court nominee Merrick Garland in 2016 and then speed Trump nominee Amy Coney Barrett through the confirmation process in 2020 prior to that year’s presidential election.

McConnell, now the Senate’s minority leader, said of the ruling that it was “courageous and correct.”

“This is an historic victory for the Constitution and for the most vulnerable in our society,” he said.

According to the Guttmacher Institute, a reproductive-rights think tank, 26 Republican-controlled states will likely move to outlaw abortion. Some had already passed abortion bans – known as “trigger laws” – set to take effect automatically upon the overturning of Roe.

Planned Parenthood says those 26 states are home to 36 million women of child-bearing age.

Prior to the Dobbs ruling, a Washington Post-ABC News Poll found that 54% of Americans wanted the Supreme Court to uphold Roe v Wade.

Norma McCorvey, the plaintiff in the Supreme Court’s landmark 1973 Roe v Wade ruling, lived a momentous life – which saw her not only playing an instrumental role in establishing federal abortion rights in the US but also switching sides and becoming involved in the pro-life movement, her oldest daughter recalled in an interview.

The story is further complicated by McCorvey’s assertion – captured in the 2020 TV documentary AKA Jane Roe – that she never supported the anti-abortion movement and only took part in pro-life activism for the money.

“She gave up a lot to fight for women’s rights and help women,” Melissa Mills said of her mother Norma McCorvey (1947-2017), better known by the pseudonym “Jane Roe,” in a video interview from her home in Katy, Texas.

Mills added that her mother, who died five years ago in that same town, would have been “devastated” to have lived to see the Supreme Court overturn the Roe v Wade abortion-rights ruling.

Norma Leah Nelson – McCorvey’s maiden name – was born in 1947 into a poor family in rural Louisiana and endured a turbulent childhood.

Her mother was an alcoholic who mistreated her, while her father abandoned their home when she was a very young girl – a life of “pain and rage” that McCorvey described in her 1994 autobiography I Am Roe.

She was just 15 when she married Mills’ father, a man named Woody McCorvey who beat her when he found out that she was pregnant. McCorvey fled to her mother’s home and confessed that, even though she had slept with a man, she was a lesbian.

Mills, who was born in 1962, ended up in the custody of her grandmother, while the future “Jane Roe” became caught up in a life of drugs and alcohol.

McCorvey’s daughter said her mother would come in and out of her life and seemed more like a sister than a mother, since she only appeared at family events like birthday parties.

During one of those gatherings, someone told Mills for the first time that her mother was “Jane Roe,” but she said it took her several years to understand what that meant.

Mills was the only one of McCorvey’s three daughters who really knew her mother. In 1967, Norma had a second daughter, Jennifer, whom she gave up for adoption; then in 1969, she became pregnant with the “Roe baby.”

McCorvey did not want to have the child. Even though abortion was illegal in Texas at that time, she tried unsuccessfully to convince her gynaecologist to perform the procedure.

She then went to a clandestine clinic that recently had been raided by police.

McCorvey finally was referred to a pair of attorneys – Linda Coffee and Sarah Weddington – who litigated her case all the way to the Supreme Court, which issued the landmark Roe v Wade ruling in 1973.

Decades later, McCorvey said in an interview that she had been treated like a pawn – adding that she had wanted to have an abortion but the litigation went on for so long that she had to give birth to her third daughter Shelly Lynn Thornton, whom she also gave up for adoption.

But in 1995, an evangelical minister who took up residence near the abortion clinic where McCorvey was working convinced her to join the pro-life Operation Rescue organisation, which was known for harassing doctors who performed that procedure.

Toward the end of her life, McCorvey said in the documentary AKA Jane Roe that her pro-life activism was “all an act”.

“I took their money and they’d put me out in front of the cameras and tell me what to say.”

Mills, however, said her mother’s pro-life conversion had been genuine and that her so-called “deathbed confession” in that documentary was a product of her resentment toward that movement.

“When she got really sick, they didn’t come around and that really hurt her feelings. They didn’t really need her anymore. They already had her and they couldn’t get anything else out of her, so she felt like she was just put up upon a shelf.”

In explaining why McCorvey had joined the pro-life movement, Mills recalled she had grown up in a religious household and that she also became depressed after revealing her true identity and personally experiencing the bitter backlash to the Roe decision.

“It made her feel guilty that people were saying, ‘you’re the devil, you’re responsible for 60 million babies’ deaths. And then she would self-medicate, and all this depression, anxiety,” Mills recalled.

In the end, McCorvey did not truly belong in either camp. Yet the important role she played in the pro-choice movement in the US cannot be erased.

“I think her legacy is going to be there longer than most of us, and they’re going to remember her before they do anybody,” a tearful Mills said.