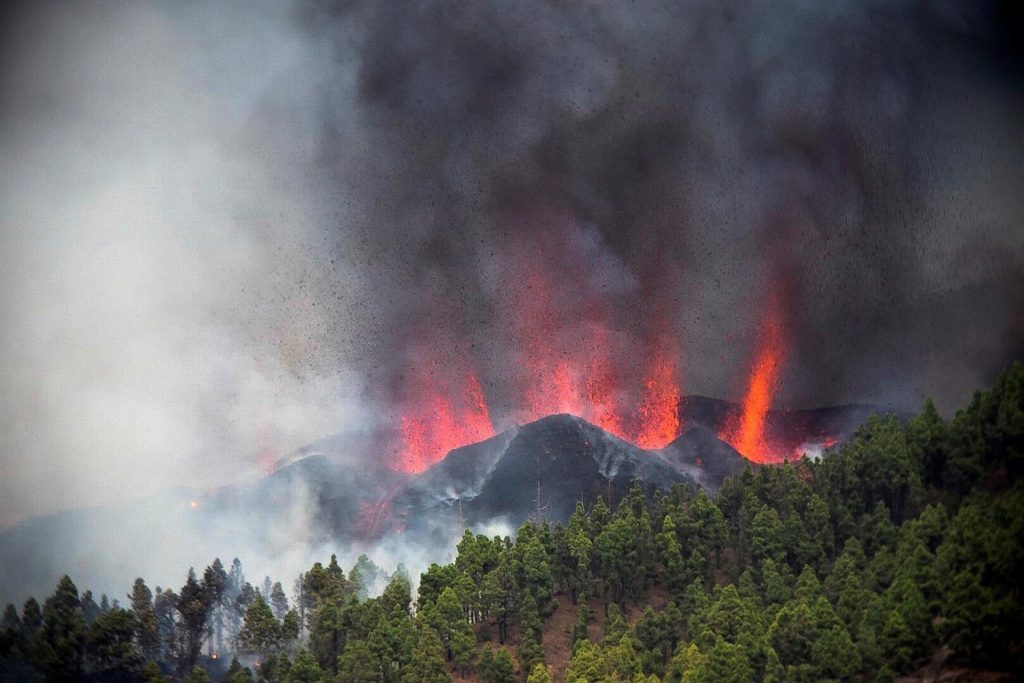 More than 5,000 people have been evacuated – at least 500 of them tourists – due to the eruption of a volcano located in the Cumbre Vieja volcanic ridge area on the Spanish island of La Palma, one of the most active volcanic zones in the Canary Islands archipelago.

The eruption yesterday came after a week in which thousands of small earthquake-like shocks and rumblings had been detected in the region. The Cumbre Vieja is located southeast of the island’s most populous municipality, Los Llanos.

No injuries or worse have been reported so far, but the eruption spewed lava and a tall column of dark ash and other volcanic material into the air over an unpopulated area, said witnesses.

A few hours before the eruption, local authorities had begun evacuating local residents with mobility problems in the five towns located closest to the volcano’s danger zone.

The volcano has developed eight openings, an abundant amount of lava has been flowing toward the towns of Alcala and Paraiso – which have already been evacuated – said Canary Islands Volcanic Risk and Prevention Plan (Pevolca) technical director Miguel Angel Morcuende.

In the latter town, from which 350 residents have been evacuated, the fires burning due to the lava flow has already damaged or destroyed several homes.

Experts are analysing the progress of the eruption and gathering data with which to forecast where the lava could move, and Morcuende said that according to simulations performed by the National Geographical Institute, the lava is heading toward the towns of La Bombilla and Puerto Naos, on the coast.

That is what future potential evacuations will depend upon, Las Palmas Town Council president Mariano Hernandez Zapata told the local television station, adding that at least eight homes had been damaged by the lava flows.

“We hope that the lava is respectful, and is kind and heads toward the coast, causing the fewest possible affects,” he said, issuing a call to the public for “responsibility and common sense” in not visiting the zone of the eruption so as not to hinder the evacuation efforts.

Authorities have not been able to determine how long the eruption will last.

In addition, as a preventive measure, authorities have recommended avoiding taking flights to the island, said Spanish airport management officials, although air traffic has not been halted.

Spanish prime minister Pedro Sanchez flew to La Palma, postponing his trip to the US to attend the UN General Assembly session in New York, according to a message he posted on Twitter.

“I’m heading at this time to the Canaries, given the seismic developments, to learn first-hand about the situation in La Palma, the coordination of the efforts and the activated protocols,” Sanchez said.

Shortly before that, also on Twitter, the premier had announced that all Spanish government entities were prepared to act in a coordinated manner given the imminent eruption of the volcano.

Sanchez later appeared before the media after meeting with Pevolca and made “special mention of the contribution of science” to enabling Civil Protection authorities to “deal with any kind of contingency.”

The National Geographical Institute and the Vulcanology Institute of the Canaries have been registering thousands of small earthquakes around the Cumbre Vieja since Sept 11 – with their foci starting more than 20km underground, but which were moving steadily toward the surface as magma worked its way upward under huge pressure from below.

Since the start of last week, the island had been on yellow alert (Level 2 on the 4-point alert scale) due to the risk of volcanic eruption in the area.

The four levels in the risk system are green, yellow, orange and red, with yellow indicating the possibility that a volcano could affect the nearby population.

Since records have been kept – starting with the conquest of the Canaries in the 15th century – La Palma has been the site of seven of the 16 volcanic eruptions the archipelago has experienced.

The Cumbre Vieja is one of the most active volcanic complexes in the Canary Islands, and is the site of two of the last three eruptions registered in the area, the San Juan Volcano in 1949 and the Teneguia Volcano in 1971.

Yesterday’s eruption comes 50 years after the last such event on land, which took place from Oct 26-Nov 17 in 1971, during which one person was killed by inhaling toxic gases.

The last major volcanic eruption in the Canary Islands took place underwater off the coast of El Hierro between 2011-12.

The first recorded volcanic eruption in La Palma – that of the Tacande Volcano – occurred in the 1430s, according to the National Geographical Institute.

La Palma, like the rest of the Canary Islands, is of volcanic origin, and its estimated age of two million years makes it one of the youngest islands in the archipelago.