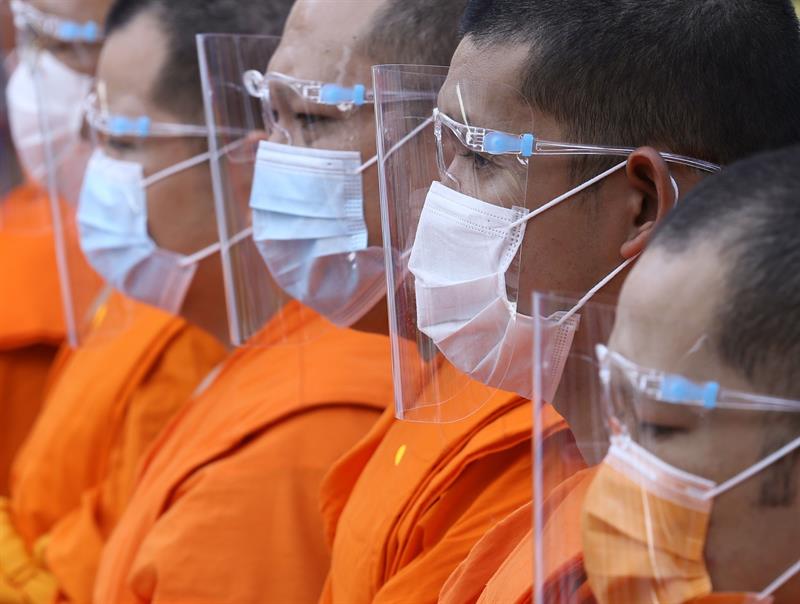 Thailand again set a new record for daily Covid-19 cases today and has announced the suspension of domestic air routes to and from high-risk zones, including capital Bangkok.

Thai authorities, who warn of further measures if cases continue to increase, will prohibit domestic flights into and out of the areas decreed as high risk — or maximum control — from Wednesday for at least two weeks, unless they are for emergency landings, medical reasons or part of the tourism bubbles.

In other provinces, the number of passengers on airplanes is limited to 50%, the Civil Aviation Authority said in a statement yesterday.

The government also decreed three new provinces as high-risk zones, bringing the total to 13, where a night curfew remains in force, as well as stay-at-home orders, and the closure of all non-essential businesses, among other restrictions.

From today, traffic checkpoints will also be established in hardest-hit Bangkok, as well as at the entry to or exit from other provinces with the aim of reducing unnecessary travel, and public transport will be limited to 50% capacity.

Health authorities today reported 11,784 new cases – a new record high of daily infections – as well as 81 deaths, bringing the total to 386,307 Covid-19 cases, including 3,422 deaths, since the start of the pandemic. Most of these have been registered since the current outbreak started in late March.

The government said in a press conference that if they had not applied measures, they estimate daily cases could rise to 32,000 a day by the end of October.

Doctors have also told local media the case count could be much higher than official records, due to lack of testing.

Thailand, like other Southeast Asian countries – such as Indonesia, Vietnam, Malaysia and Myanmar – is experiencing its worst wave of the pandemic, linked to the Delta variant, alongside an erratic and slow vaccination programme.

Vietnam today also tightened restrictions in 19 provinces after recording 5,887 Covid-19 infections the previous day, a figure that in 24 hours quadrupled the 1,465 cases detected in all of 2020.

The epicentre of this new wave, the worst the country has suffered, is Ho Chi Minh City, the most populous in the country with 13 million inhabitants in its metropolitan area.

Here the authorities last night counted 4,692 cases, most of them in people already isolated in quarantine centres for having been in contact with positive cases.

Since July 9, inhabitants of the city have only been able to leave home for essential activities, while most businesses remain closed and thousands of workers in industrial areas are sleeping in factories to maintain production.

The communist regime in Hanoi acknowledged in a statement on Saturday the current outbreak is getting complicated and announced movement restrictions starting today in 16 southern provinces of the country, as well as the deployment of 10,000 health workers.

Vietnam managed to contain the epidemic throughout 2020 and at the beginning of this year with its policy of closing borders to tourism and exhaustive tracking and isolation of positive cases and their contacts, But now, the more contagious Delta variant is starting to overwhelm health authorities.

Some experts argue the outbreak of cases since April is due to the fact that a large part of the population had some immunity against the first strains of the coronavirus, but not against this new variant – which is wreaking havoc throughout Southeast Asia.

The virulence of this new wave has forced the government to accelerate the rate of vaccination, one of the lowest in Asia, with just 300,000 people fully vaccinated out of a population of more than 97 million.

Vietnam has so far received 9 million doses from various companies, while a vaccine being produced by a local firm has passed its third phase of testing and its mass production is expected to start in September.

Meanwhile, almost all coronavirus restrictions were removed in England today – in what the local tabloid press has described as Freedom Day – an occasion UK prime minister Boris Johnson will celebrate from isolation after coming into contact with the health secretary, who tested positive for Covid-19.

From today, there will be no limits on how many people can gather and, after over a year of social-distancing rules, nightclubs, bars and theatres can fully reopen with no restrictions in England.

Face coverings indoors are recommended though not mandatory and people no longer need to observe social distancing.

TV footage showed queues of partygoers outside nightclubs just after midnight as youngsters celebrated the change of rules.

The UK yesterday reported 48,161 new coronavirus cases and 25 deaths in the last 24 hours, according to government data.

Some experts worry infections could skyrocket to 200,000 a day later in the summer without restrictions in place.

On Friday, 1,200 international scientists signed an open letter to the Lancet medical journal criticising the UK government’s decision to ease the rules – saying England could become a breeding ground for vaccine-resistant coronavirus variants and a threat to the world.

Johnson urged the general public to act with caution as England entered a new chapter in its coronavirus response.

The prime minister, and the chancellor of the exchequer, Rishi Sunak, are self-isolating after coming into contact with health secretary Sajid Javid, who announced he had tested positive for Covid-19 on Saturday.

Over 68% of the adult population in the UK has received the full course of the Covid-19 vaccine and despite observing its highest daily coronavirus figures since January, hospitalisations and deaths remain low.

Coronavirus rules were also eased in Scotland although limits on social gatherings remained in place. Northern Ireland and Wales are set to list some restrictions on July 26 and Aug 7 respectively.