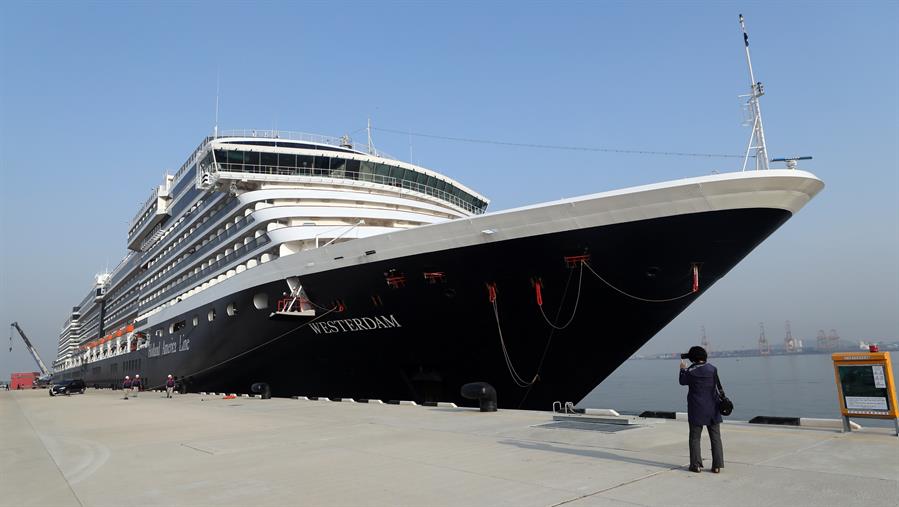 A cruise ship carrying thousands of people will not be allowed to disembark in Thailand, the country’s health minister said today.

Anutin Charnvirakul, Thailand’s health minister, wrote on his Facebook account that authorities would not allow the Westerdam cruise ship’s 2,257 people to leave the vessel once it docks, due to the risk of travellers carrying a new coronavirus that has killed more than 1,000 people.

“I have already ordered that [the cruiser] not be allowed to disembark,” Anutin said in a brief message on the social network, adding an emoji of a ship.

The vessel, operated by shipping company Holland America Line, announced it would dock Thursday in the coastal city of Laem Chabang, about 125km southeast of Thailand’s capital Bangkok.

“Westerdam is sailing for Laem Chabang (Bangkok), Thailand, where the current cruise that departed Feb 1 will end on Thursday…” Holland America Line had said in a statement yesterday on its website, adding that guests would be transferred to Bangkok for their return home after disembarking the vessel.

The ship had previously been denied entry into Japan, Taiwan, the Philippines and the US island territory of Guam.

“Holland America Line has been notified that the Japanese government will not permit Westerdam to call in Japanese ports,” a Thursday statement read. The company added Friday that it did not believe there were cases of coronavirus aboard the ship.

However, Japanese authorities denied its entry after a person on board showed signs of being infected. The Westerdam is carrying 1,455 passengers and 802 crew members, who departed from Hong Kong on the first day and planned to arrive Saturday in Yokohama, Japan.

Thai health authorities have confirmed the infection of 32 people in the country, of which at least 10 have already been discharged.

In China – where the outbreak’s origin is linked to a fish market in Wuhan, Hubei province – the National Health Commission today raised the number of deaths to 1,016 and the number of infected people to 42,638.

To date, all but two deaths – in the Philippines and Hong Kong – have occurred in mainland China and, although about 20 countries have identified cases, China accounts for about 99% of those infected.

According to China’s National Health Commission’s latest count at midnight local time, 7,333 serious cases had been recorded, while 3,996 people had been discharged.

The commission said it had tracked 428,438 patients in close contact with those infected, of which 187,728 are still under observation.

Of the latter, 21,675 are suspected of having contracted the virus.

At 108, today’s data reflects the largest increase in the number of deceased in a single day, in addition to surpassing the 1,000-death mark. The death count a day earlier was 908 and the number of confirmed cases stood at 40,171.

A further 2,478 people were added to the list of new infections – it marked the beginning of a slight slowdown in the number of new infected registered daily, according to official statistics, which said another 716 patients were also discharged today.

Of the 108 deaths, 103 occurred in Hubei province, of which Wuhan is the capital and epicentre of the outbreak, and has remained in de facto quarantine since Jan 23.

The remaining five cases were distributed among Beijing, Tianjin, Heilongjiang (both in the northeast), Anhui Province and Henan Province (both in the east). Hubei also holds 2,097 of the 2,478 new cases.

Tedros Adhanom Ghebreyesus described the outbreak as a “common enemy against humanity” and said all countries need to work together to defeat it.

Scientists worldwide will meet today to accelerate the development of diagnoses, treatments and vaccines against the disease.

The symptoms of the new coronavirus, which the organisation has called 2019-nCoV, are in many cases similar to those of a cold, but may be accompanied by fever, fatigue, dry cough and dyspnoea (shortness of breath).