Security officers used blue-dyed water against demonstrators who had gathered in the Pathumwan area in Thailand’s capital, holding umbrellas to protect themselves from the blasts as they were pushed back across the street. No injuries had been reported as of press time.

“Time’s up!” police said as they fired warning jets in the air, which ricocheted off the Skytrain station above them – before they aimed directly at demonstrators.

Multiple reports from the scene said the blue water contained chemicals that stung the eyes. Protesters backtracked within minutes of the confrontation, as police advanced several hundred metres down Rama I road, continuing to blast jets when they were met with further crowds.

Among the demonstrators were students and elderly citizens, who were undeterred by the monsoonal downpour seen throughout the evening. 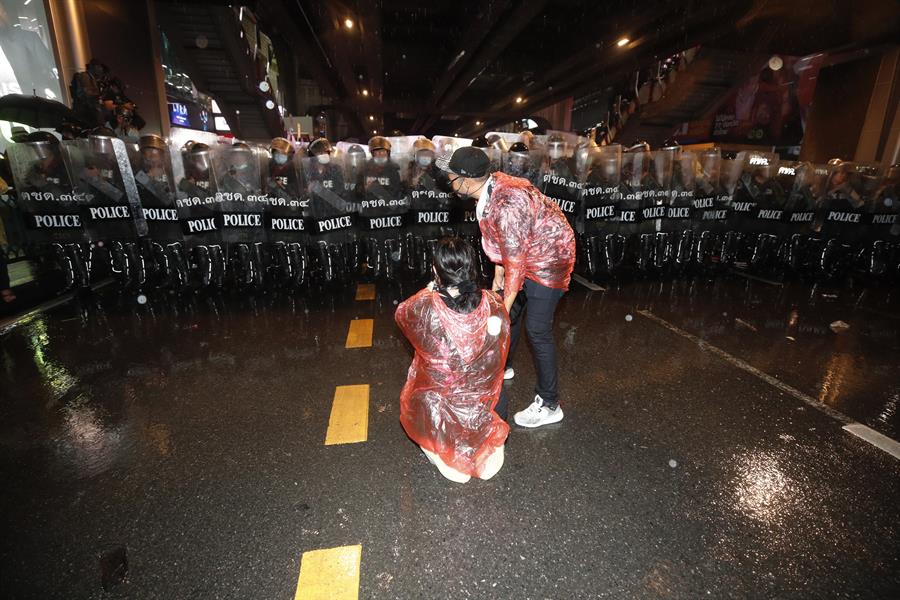 The situation had earlier reached boiling point when protesters – separated by fences authorities had set up – refused to yield to an ultimatum to disperse from the scene, where they stood just metres away from hundreds of police armed with batons and shields.

A countdown from 10 via a megaphone followed a barrage of water fired on the crowd with trucks, as the line of officers and the three vehicles advanced – a process repeated several times when the distance between them grew shorter.

Some began pelting police with water bottles and were met with further jets from the trucks. 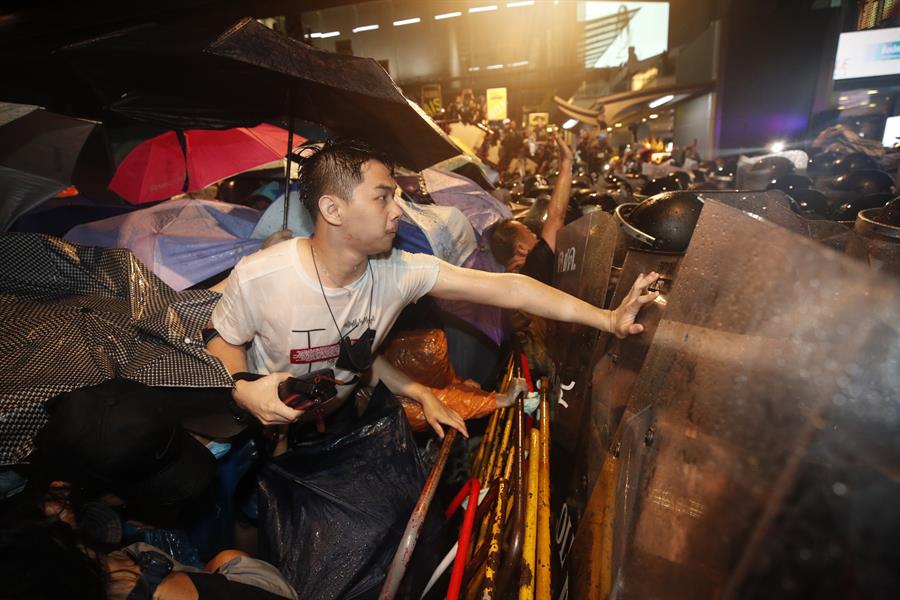 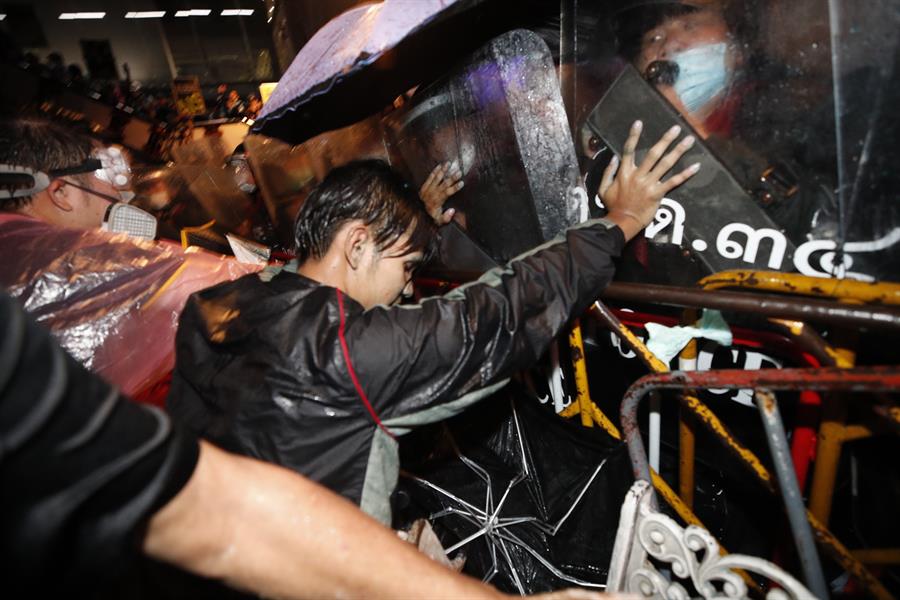 Protest organisers brought the rally to a close, saying there would be no further speeches or gatherings – and urging demonstrators to retreat to the grounds of nearby Chulalongkorn University if they wanted to seek refuge, though many stayed put to confront authorities.

International and local news broadcasters covering the live events were offset by several minutes and censored, a method used continuously since June when the large-scale protests began. 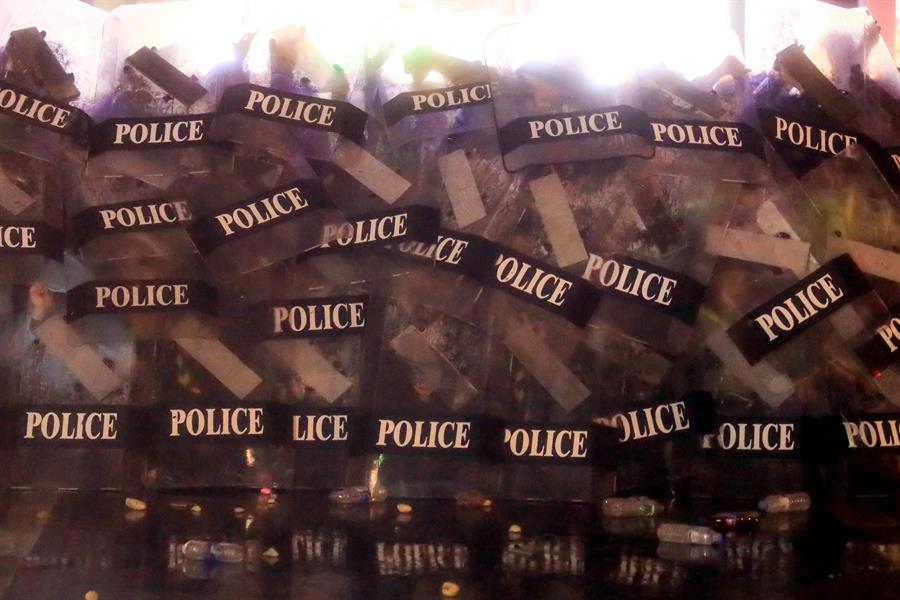 The movement calls for the government’s resignation, constitutional reform and curbs on King Vajiralongkorn’s power.

Yesterday’s events follow a week in which rallies have intensified when the king – who habitually lives in Germany – flew into the country last weekend to attend rites on the occasion of the fourth anniversary of his father’s death. King Bhumibol, who was widely popular and ruled for 70 years, died on 13 Oct 2016.

Peaceful protests Wednesday marked a symbolic moment, as demonstrators at one point flanked the royal motorcade in which Queen Suthida and Crown Prince Dipangkorn were travelling, expressing their discontent with the current royal institution.

Thailand has one of the world’s most draconian lese-majeste laws, with insults to the crown carrying prison sentences of up to 15 years per count.

In a press conference yesterday, he appeared to warn protesters not to break the decree he had imposed and made veiled allusions to death in cryptic declarations to journalists.

“Remember, don’t be reckless because everyone can die today or tomorrow, as the (Buddhist) prayer says. Don’t be careless, everyone can die any time of illness or whatever… Do not challenge the Grim Reaper,” the prime minister said.

Prayut also threatened to impose a curfew if demonstrators continued to rally, adding that he would not resign, as the movement demands.

Authorities had detained 51 demonstrators this week, including four student-led protest leaders, according to the Thai Lawyers for Human Rights group – who added that a further 12 arrest warrants had been issued following yesterday’s events. Live footage of the rally showed police taking some protesters away when crowds began to disperse.

King Vajiralongkorn yesterday said Thailand needed “people who love the country and love the monarchy,” during a visit to Sakon Nakhon Rajabhat University in the country’s northeast, where he left Thursday to stay at Phu Phan Ratchaniwet Palace.