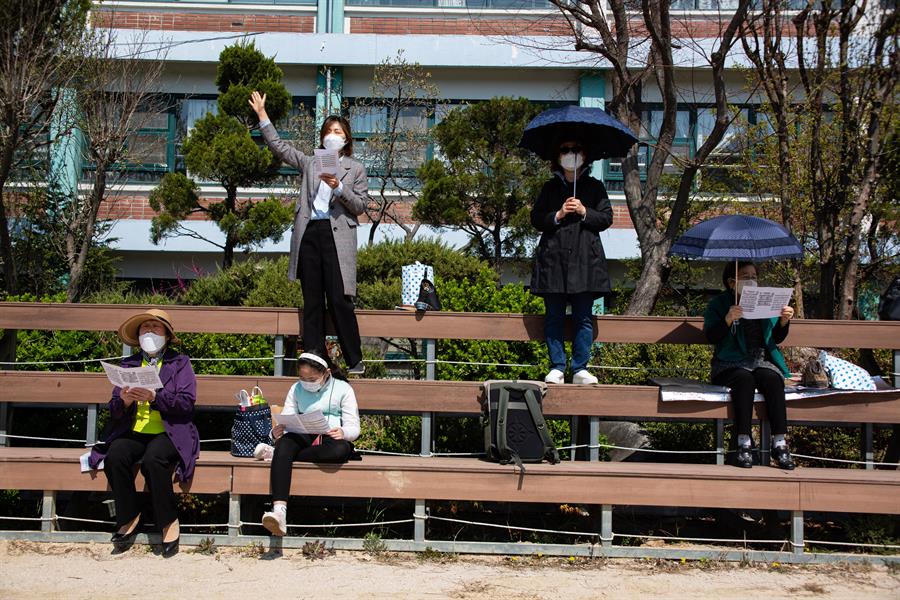 Protestant churches have become hotspots of the novel coronavirus infections in South Korea, while the government has refrained from forcibly shutting down these religious centres which play an important social role.

Towards the end of February, when it was learned the country’s first major community outbreak had originated among the Shincheonji Christian sect of evangelical roots, most South Koreans were not surprised.

Some experts then noted the authorities had made the mistake of not monitoring the churches – which for many, play a social role equivalent to that of football stadiums in many other countries.

In South Korea, Christianity began to spread in the late 19th century and expanded considerably from the mid-20th century, especially after the Japanese colonisation and the Korean War.

Currently, Christians make up almost one-third of the country’s population. Congregations – especially Protestant ones – are sometimes attended by hundreds of thousands of followers.

Some of the church premises, such as the Yoido Full Gospel Church in Seoul, have the capacity to accommodate more than 10,000 parishioners.

These are not mere devotion centres, but also – like football stadiums – act as places where “connections are made” in the fields of politics and business, said Koo Se-woong, who’s pursuing a doctorate in religious studies at Stanford University in California.

After Shincheonji was found to be a hotspot, the government urged religious organisations to cancel face-to-face services and conduct them online instead.

The recommendation was accepted by major protestant churches, as well as Buddhist temples and the Catholic community.

“On Feb 24, the Catholic Bishops’ Conference of Korea issued a statement recommending the cancellation of masses, a measure followed by every diocese in the country,” said Ester Palma, a missionary from Spain for 14 years in the city of Daejeon.

Palma explained the measure has affected not only prayer services, but also other activities: the community dining room in Daejeon was closed down and lunch packets were delivered at doorsteps, while all youth activities stood cancelled.

“People are having a hard time,” she added, underlining the church’s importance in the community life of her locality.

However, several small Protestant churches in and around Seoul have continued to hold services and activities – and have emerged as new hotspots of infection, leading to further outbreaks in a region that houses 26 million people, or half the country’s population.

The pastors at these churches, which lack centralised governing bodies that can urge them against holding regular activities, claim they survive entirely on the weekly contributions of the followers and lack the funds to go online.

Moreover, these churches are often very strict regarding attendance and have a “fierce competition, not only with other religions, but among themselves” to increase their number of followers, noted Koo.

“Respecting religious freedom is an argument they’re using to keep the churches open,” the expert added.

President Moon Jae-in’s own liberal government has in turn cited freedom of worship as a reason against forcibly shutting down these churches – which are hampering the fight against the coronavirus.

However, Koo recalled that “many followers belong to the conservative political spectrum” and it is logical to think the government is unwilling to ruffle feathers “especially, bearing in mind that there’s a legislative election coming up next week.”

Among these rebellious churches, the one that stands out is the Sarang Jeil Church in Seoul’s Seongbuk district, led by controversial pastor Jun Kwang-hoon.

“He has been at the helm of a movement that strongly opposes Moon’s government and the leader of the conservative opposition, Hwang Kyo-ahn, has expressed sympathy for his church,” Koo pointed out.

Although Jun has been imprisoned after leading mass protests banned by the authorities following an increase in coronavirus cases, and is also accused of violating electoral law and defaming Moon.

However, people from his his church continue to gather in large numbers every Sunday in a gesture that is both religious and political.

However, beyond political ideologies, Koo stressed that in South Korea “state-church relationship has always been very complex,” and for many of the faithful “loyalty to the church is more important.”