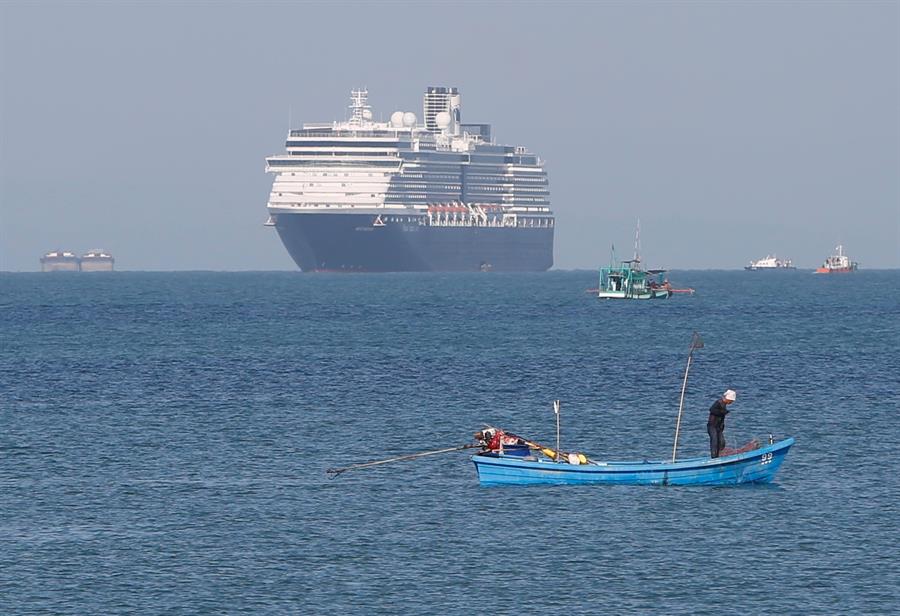 A cruise ship carrying thousands of people – which had been denied entry into several countries over fears its passengers were infected with a new deadly coronavirus – docked today in a port in Cambodia, 13 days after setting sail.

The Westerdam, which departed Feb 1 from Hong Kong amid the growing COVID-19 crisis and had been turned away from Japan, Thailand, Taiwan, the Philippines and Guam, arrived in the port of Sihanoukville, where its operator said it would remain several days.

“Guests will disembark in Sihanoukville over the next few days and transfer via charter flights to Phnom Penh for forward travel home. Holland America Line will arrange and pay for all flights home, in addition to the full cruise refund and 100% future cruise credit already communicated,” the operator said in a statement published on its website.

Holland American Line added that there were no COVID-19 infections among the 2,257 people on board – 1,455 guests and 802 crew members – which was Japan’s initial concern for not allowing it to dock in Yokohama and subsequent destinations.

“All guests on board are healthy and despite erroneous reports there are no known or suspected cases of coronavirus on board, nor have their (sic) ever been.”

“My sincere thanks to the government of Cambodia and Prime Minister Hun Sen for clearing the way for Westerdam Cruise ship to dock at Sihanoukville soon. This is a welcome act of solidarity at a time when the world has a window of opportunity to stop #COVID19 and avoid stigma & fear.”

Hun Sen’s government has taken a particularly relaxed stance amid the outbreak. In a press last month in Phnom Penh, he said Cambodia would “stand by” China in light of the crisis and alluded that taking strong contingency measures would be detrimental to the economy and bilateral relations.

The comments came as he was asked whether the country would suspend flights to the affected areas in China, which he likened to “killing the Cambodian economy” and a downgrade of his country’s diplomatic relations with Beijing.

Cambodia has so far confirmed one case of the new coronavirus, something a study by Harvard University’s Public Health School said was less than could be expected considering the number of Chinese visitors to the country – especially from affected areas. Thailand and Indonesia are the other two countries the study highlights.

Chinese health authorities said this morning that COVID-19, the origin of which is linked to fish markets in Wuhan, Hubei province, had killed 1,355 people.

The WHO on Tuesday officially named the disease COVID-19, while the virus which causes it has been called SARS-CoV-2 (changed from its provisional name 2019-nCoV) by the International Committee on Taxonomy of Viruses.

COVID-19’s symptoms are in many cases similar to those of a cold but may be accompanied by fever, fatigue, dry cough and dyspnoea (shortness of breath).