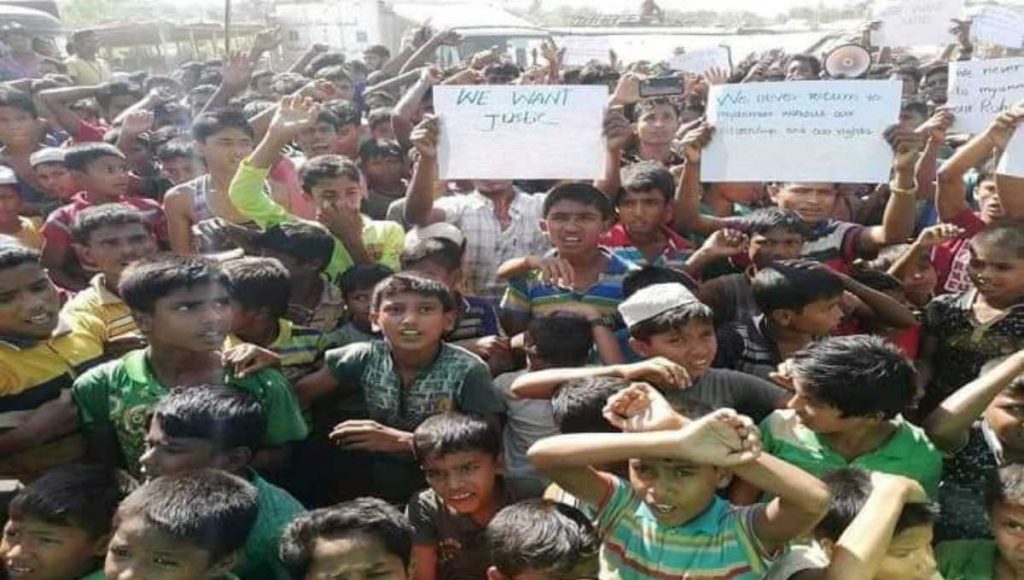 Women, children, and the elderly joined the gatherings in at least 32 spots of the camps in southeast Cox’s Bazar, organisers said.

“We want refugee life no more, we want to go back home,” said Mohammad Toha, an organiser of the campaign at Cox’s Bazar.

“We want the Myanmar government to grant us our citizenship, give us native status, and ensure our safety and security. If these are assured, we all are ready to go back home.”

Toha said they launched the campaign as they were frustrated at seeing no progress in the trial against the Myanmar army for crimes against their community.

“We could not go back home for five years. We were hoping the ICC (International Criminal Court) or any other country would ensure justice for us. But now we see no country pressing for justice, so we launched this campaign.”

“It is not a program of any particular group. All Rohingyas joined the campaign spontaneously. Our (community leaders) and youths led the campaign.”

Images circulated by the campaigners showed Rohingyas carrying different banners and placards in Myanmarese and the English language.

One placard read, “We want justice, we want rights, we want to go back to our motherland”.

“It is a great initiative we took collectively because we all are ready to go to our country,” said Khin Maung, executive director of the Rohingya Youth Association.

“We showed the world we are ready to go to our country. We request the UN and world community to support us,” said Maung.

It was the first large gathering for Rohingya Muslims since 2019, when more than 100,000 refugees attended a program organised by the Arakan Rohingya Society for Peace and Human Rights (ARSPH), seeking justice for crimes against them and a safe and dignified return to home.

ARSPH chairman Mohibullah was shot dead in a refugee camp in Cox’s Bazar in September 2021.

Bangladesh authorities, who did not allow Rohingyas to hold any such programme since then, said they were on alert today.

“We have been informed that this would be a peaceful event. As long as peace is there, we don’t have any issues,” said Naimul Haque, commander of the Armed Police Battalion posted in Rohingya camps.

As per the UN refugee agency, Bangladesh is home to over 920,000 Rohingya refugees – including around 738,000 who fled Myanmar after August 2017 following a wave of military violence and persecution, flagged by the UN as ethnic cleansing and an attempt at genocide.

Two attempts to start the repatriation of the refugees from Bangladesh to Myanmar failed as the Rohingyas refused to return home without a citizenship and security guarantee.