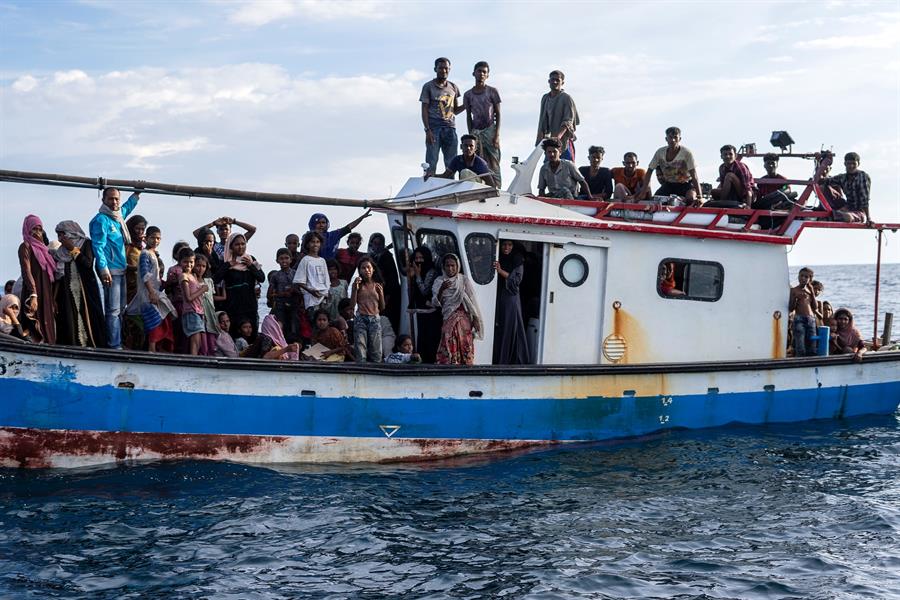 Indonesian fishermen have rescued nearly 100 Rohingya people adrift on a boat near the coastal province of Acheh, weeks after a similar rescue in Malaysia – indicating the possibility of a fresh refugee crisis in the region.

According to Indonesian police, the boat’s engine had stopped working and it seemed to be sinking with 30 minors, 49 women and 15 men onboard when it was spotted by three Indonesian fishermen on Wednesday around four miles north of the island of Sumatra.

However, the number of people onboard has varied in reports by different sources.

“We are urging the Indonesian authorities to rapidly ensure rescue, disembarkation and protection for the refugees,” Amnesty International Indonesia executive director Usman Hamid had said in a press release yesterday evening.

“These children, women and men have likely been at sea for weeks, if not months, and their basic needs, such as food, clothes, water, medicines and proper shelter, must be met.”

The fishermen alerted the local authorities and proceeded to rescue the Rohingyas, who originally set sail from Myanmar and are currently in the waters close to the Seunuddon beach waiting to be brought to land, according to the police.

A police spokesperson told local media outlets that a special team had been formed to examine the health of the refugees and find temporary lodgings for them.

In early June, Malaysian coastguards had rescued 269 Rohingyas who were also fleeing from Myanmar on a vessel near the northwestern island of Langkawi, where they remain in detention.

Those rescued in Malaysia told the authorities that dozens of other passengers had died on the way.

“Under international law, all countries have the obligation to protect and rescue people at risk of serious harm. Refusing to rescue them or – even worse – putting traumatised people back on boats and sending them into dangerous waters – are clear violations of international law,” Hamid said.

According to Amnesty International, some 800 Rohingyas have been adrift in the Bay of Bengal for nearly two months while being denied entry by several countries amid fears of them being carriers of the novel coronavirus. However, it is not clear whether the two groups that reached Indonesia and Malaysia form part of this figure.

The recent rescue efforts resemble the 2015 refugee crisis when hundreds of Rohingyas were left adrift on boats in terrible conditions after a human trafficking network was dismantled in Thailand and Malaysia. The route became less frequented subsequently.

At that time, it was estimated that more than a million Rohingyas lived in Myanmar’s western state of Rakhine, but in August 2017 the Myanmar Army launched a military campaign against the mostly Muslim minority community, triggering a massive exodus.

The military operation, which has led to the Myanmar government being accused of genocide in the International Court of Justice in The Hague, resulted in around 725,000 Rohingyas fleeing to neighbouring Bangladesh.

Myanmar does not recogniz=se the Rohingya as citizens, having considered them to be Bengali immigrants and subjecting them to discrimination – including restrictions on their freedom of movement – for years.