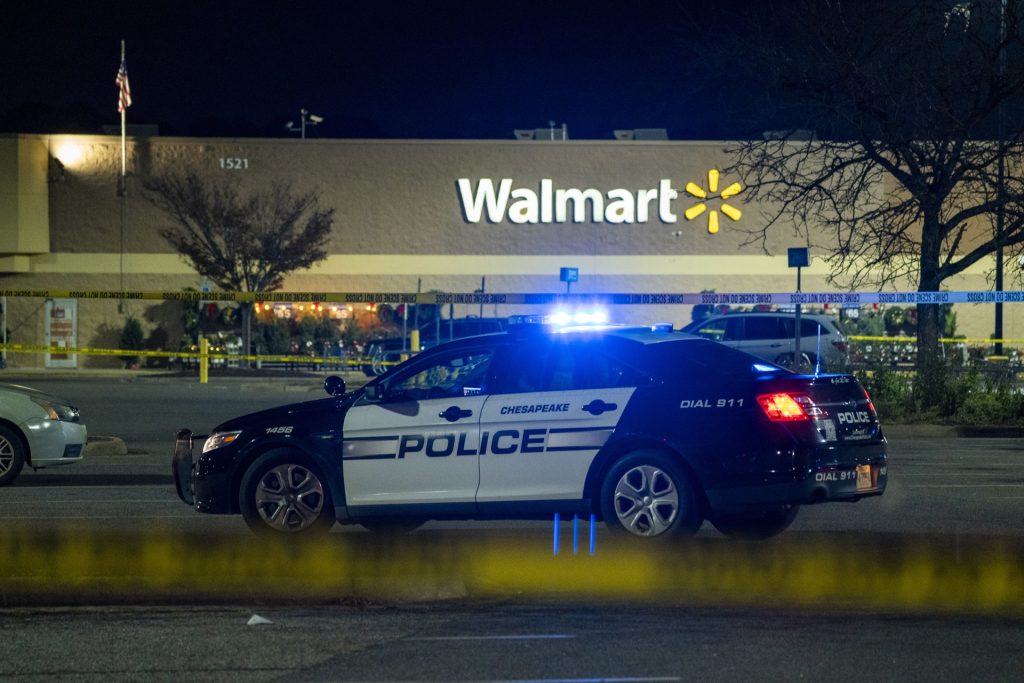 The gunman who killed six people at a Walmart in Chesapeake, Virginia, was a store employee and apparently committed suicide after going on his shooting spree inside the store, police said at a press conference yesterday.

Chesapeake police chief Mark Soleski said when officers arrived at the store, just minutes after receiving the first emergency call, they found the shooter already dead from a gunshot wound – which they believe, he inflicted on himself.

Soleski confirmed six people died – not counting the gunman – and added that the four wounded are being treated at local hospitals.

He said that gunman used an automatic pistol to carry out the massacre but provided no further details about him except to say he was male and a Walmart employee – although he could not confirm whether he was a supervisor or was working on his shift when he began his rampage.

However, witnesses have confirmed he was a manager, and in remarks to ABC, Briana Tyler – a store employee – said her supervisor entered the workers’ break room and opened fire on the people relaxing there.

“I looked up and my manager just opened the door and he just opened fire. He just started shooting throughout the entire break room. I watched multiple people drop down to the floor, whether they were ducking for cover or they were hit.”

She said the shooter did not target anyone in particular but rather began shooting at the first person he saw and continued from there.

She said that man didn’t say a word before opening fire, adding that “he was the manager to look out for because there was always something going on with him, just having an issue with someone.”

However, she said of the shooter that “nothing” indicated he was about to commit a crime of this kind.

Police were alerted about the massacre at 10:12pm, at which time the Wal-Mart was still open.

About 40 emergency vehicles were dispatched to the scene, where an enormous police contingent was deployed, with officers remaining inside the store into the later morning hours.

The police chief at his press conference said all the evidence must be processed and witnesses interviewed before he would be able to provide more details on the tragic incident.

Meanwhile, in Washington, president Joe Biden said greater efforts must be made to control firearms, noting that earlier this year he signed “the most significant gun reform in a generation, but that is not nearly enough.”

The president continued: “We must take greater action.”

Biden Americans will celebrate Thanksgiving today but, because of this “horrible and senseless” act of violence, there will be empty chairs at more dinner tables.

“We also mourn for all those across America who have lost loved ones to these tragic shootings that we must come together as a nation to stand against.”

In June, Congress approved increased gun controls after a minimal pact between Democratic and Republican lawmakers – following on May 19, when children and two teachers were gunned down at a Uvalde, Texas, elementary school and another 10 people were murdered in a racially motivated attack in Buffalo, New York.

The new law, signed by Biden, includes a review of the firearms purchasing procedure for under-21 gun buyers and extends nationwide the “red flag” alert rules allowing legal measures to be activated to confiscate firearms from people deemed to represent a danger to others or to themselves.

The measure also ends the so-called “boyfriend loophole” whereby now anyone’s unmarried partner accused of domestic violence may not continue to possess firearms, although that does not apply to married persons.

Despite the new law, however, the conservative-majority US Supreme Court in June expanded the right to carry firearms in public.