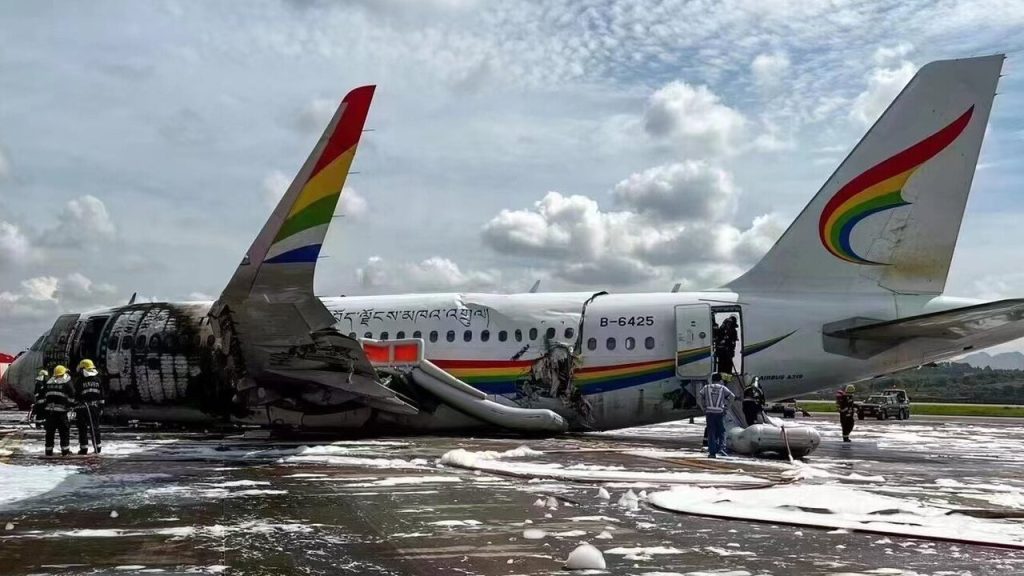 A Tibet Airlines plane caught fire this morning as it skidded off the runway while taking off from an airport in central China.

According to state-run CCTV network, the plane veered off the runway when it took off for Lhasa.

More than 40 people were mildly injured and were taken to medical facilities for treatment, the Chongqing airport said on its official Weibo account, the Chinese equivalent of Twitter.

The videos showed dozens of terrified passengers leaving the plane and running across the runway while flames and thick columns of black smoke engulfed the jet.

The airport said the plane deviated from the runway as “the left side of the aircraft’s nose caught fire.”

According to the official Global Times newspaper, 122 people, including nine crew members, were on the plane.

All of them were evacuated safely.

The stricken Airbus A319-100 had been in service for more than nine years.

Tibet Airlines said it was awaiting more information about what happened and that “first level emergency plans” had been activated.

An investigation has been opened to ascertain the cause.

It is not the only aviation accident recorded in China recently.

On March 21, a China Eastern Boeing 737-800 that covered the Kunming-Canton route abruptly plunged from 29,000 feet into a mountainside, killing all 132 people on board.

The accident ended an almost 12-year streak without a serious aviation mishap in China.