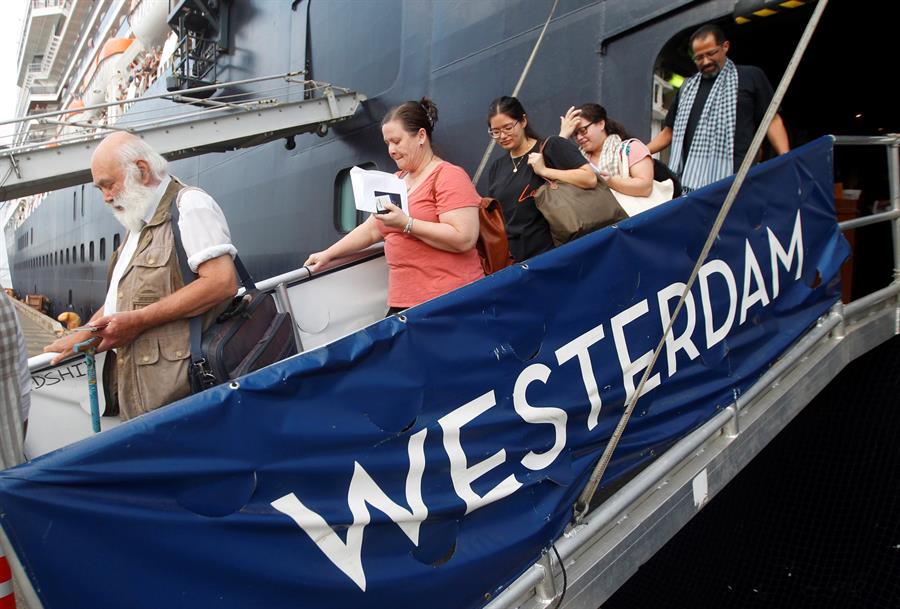 Cruise passengers rejected by several countries over fears they were infected with the Covid-19 illness disembarked today in Cambodia after authorities confirmed they were healthy.

The Westerdam, of the Holland America Line shipping company, docked at Sihanoukville port, where local authorities and diplomatic personnel were waiting a day after it anchored off the coast.

“The first passengers are off the Westerdam and headed home! We’re happy to greet them as they step onto dry land. Thank you to the government of Cambodia who helped this happen,” the US embassy wrote on its Twitter account.

Holland America said it obtained permission to disembark the 1,455 passengers and 802 crew after 20 blood samples were negative after being examined yesterday in a Phnom Penh laboratory.

“We are pleased with the successful resolution of this challenging journey that was complicated by unfounded fears stemming from erroneous information with respect to the medical condition of Westerdam’s guests and crew,” the shipping company said in a statement.

Cambodian prime minister Hun Sen received the first passengers on the pier, who were presented with flowers and krama, the traditional Cambodian handkerchief, in an act broadcast live on all of the country televisions.

He told the press he authorised the arrival of the ship in Cambodia at the request of the US embassy and that he would have done so even if some passengers had tested positive for Covid-19.

Several buses arrived at the dock to pick up the first dozens of passengers and take them to Sihanoukville airport to return to their countries, the leader added.

Holland America added that it began to brief passengers about their flight details and the repatriation process would last several days, during which travellers will be able to remain in the cruise.

The ship, which departed Feb 1 from Hong Kong, was scheduled to arrive tomorrow in the Japanese city of Yokohama, but authorities denied it entry after a person on board showed symptoms of being infected with the illness.

Cambodia authorised the ship’s arrival to its territory Wednesday after it had been rejected by Taiwan, the Philippines, Guam and Thailand.

The Westerdam’s incident comes as Japanese authorities have quarantined another cruise ship, the Diamond Princess, in Yokohama with at least 218 of its 3,700 people on board having tested positive for Covid-19.