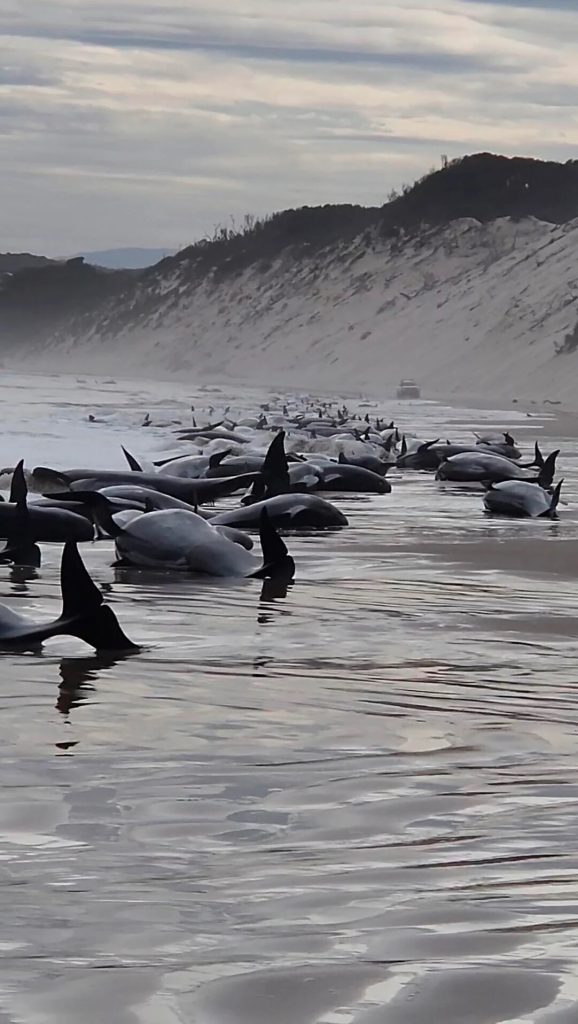 Rescuers were racing against the clock today to save 35 pilot whales still alive out of around 230 that stranded the previous day on a beach in Macquarie Harbor, in the west of the Australian island state of Tasmania.

Teams of experts are trying to refloat the remaining whales after five died overnight at Ocean Beach and a nearby sand flat in the entrance to the harbour, known as by the locals as Hells Gates.

“We are primarily focused this morning on really getting into that rescue operation and getting them [the whales] released,” Tasmania Parks and Wildlife Service regional operations manager Brendon Clark told public broadcaster ABC.

“We are conscious that some of them may re-beach themselves, and so we’ll be monitoring that.”

Some 230 whales have stranded near Macquarie Harbour in the west of the Australian island state of Tasmania, of which half are believed to have died, the country’s authorities said today.

“​Marine conservation experts are heading to Tasmania’s West Coast, where a pod of approximately 230 whales has stranded near Macquarie Harbour,” the Tasmanian Department of Natural Resources and Environment said in a statement.

A team from the Marine Conservation Programme is travelling to the area, where they will collaborate with Tasmania Parks and Wildlife Service staff and the Tasmanian police to rescue the whales stranded on Ocean Beach, it added.

Photographs provided by the department show the animals – believed to be pilot whales – trapped on the surface of the beach.

The department said its response to strandings in this area tended to be complex given the beach’s remote location.

The mass stranding occurs exactly two years after some 470 pilot whales stranded at the same location. Only 100 out of them could be rescued and returned to the sea.

Yesterday, 14 sperm whales died after stranding on a beach on King Island in the north of Tasmania.

Whales and other marine mammals are often found stranded on the coasts of southern Australia and neighbouring New Zealand.

Experts have not been able to definitively clarify the reasons why whales beach, although they usually attribute this to diseases, navigation errors, sudden changes in tides, predators or extreme weather conditions.