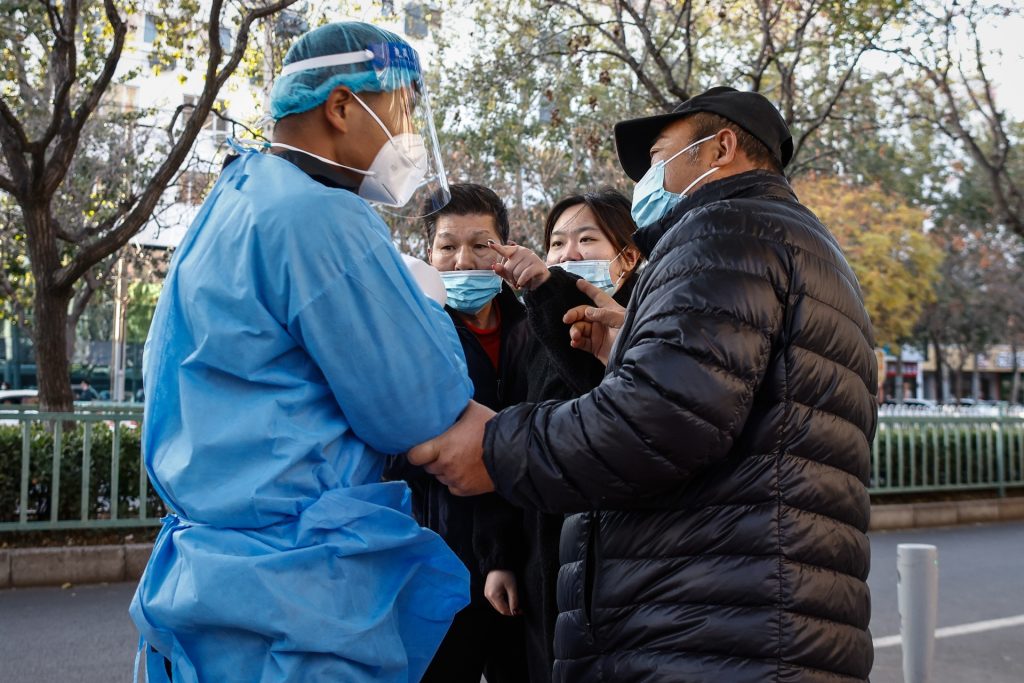 Chinese football fans were left feeling outraged by footage of maskless fans at the World Cup in Qatar as Beijing rolled out stiff restrictions to deal with new domestic Covid-19 outbreaks.

Cities such as Chongqing, Guangdong and the capital have recently applied containment measures in a bid to curb a spike in Covid-19 cases with 30,000 new infections reported in the country yesterday – a figure not seen since April.

Recent restrictions have sparked anger among many Chinese citizens who, up until now, had widely supported the central government’s zero Covid strategy in place since the early days of the pandemic in 2020.

The stringent rules have been applied in recent months in a localised way, targeting areas where outbreaks are detected, meaning most citizens have been able to lead relatively normal lives.

However, the current outbreaks have spread to practically all provinces as millions of Chinese people tune in to watch the World Cup – only to see stadiums packed with maskless people.

“Are we living in parallel universes?” some users of Weibo, a Chinese social network, asked as the topic started to trend online.

“Aren’t there any children or elderly people in Qatar?” other users questioned, in a nod to the reasoning behind the zero Covid approach which Beijing says has saved lives.

City dwellers in China have been taking several weekly PCR tests since the spring. Negative tests are essential to use public services and access supermarkets, parks and shops.

People with the virus are forced to quarantine, as are those who have been in close contact with the disease.

“Wake up. I see on television people in the stadium without masks and screaming at the top of their lungs and I can’t even leave the house,” one Weibo user lamented.

Despite the backlash, many people still stand by the harsh measures with one person saying: “Don’t be fooled. What you see in the World Cup are people with money who can afford the expense of falling ill. Also, the most vulnerable in foreign countries have already died, something that China has avoided.”

The constant closures and restrictions have sparked riots in Lasa and Guangdong, where thousands of new daily infections have led to the closures of many districts with some citizens responding by tearing down the fences that cordon off confined neighbourhoods.

Authorities last night announced the confinement of eight districts in the city of Zhengzhou, which is home to China’s main iPhone assembly plant with over 200,000 workers.

Footage of protests over wage disputes emerged this week after Taiwanese-based Foxconn, a smartphone manufacturer, failed to deliver on bonus and salary promises.

Yesterday’s violent clashes between workers and security forces sporting hazmat suits were captured and shared online on several social media platforms, including Twitter, which is banned in China.

Since 2020, large factories, such as Foxconn, have implemented a “closed loop” system that isolates workers for long periods within the facilities to avoid contagion and keep up production outputs.

This week, an article on a Chinese Wechat account raised 10 questions about the government’s prevention policies and soon went viral.

The user wondered what would be the necessary condition for the country to open up again, as well as asking if Covid cannot be eradicated, does it make sense to pay such a high price for trying to eliminate it? The user also contested whether constant PCR testing was useful.

The post exceeded 100,000 views by the time it was deleted from the social network, fulfilling what some comments at the bottom of the post added: “An eleventh question: When are they going to delete this article?”