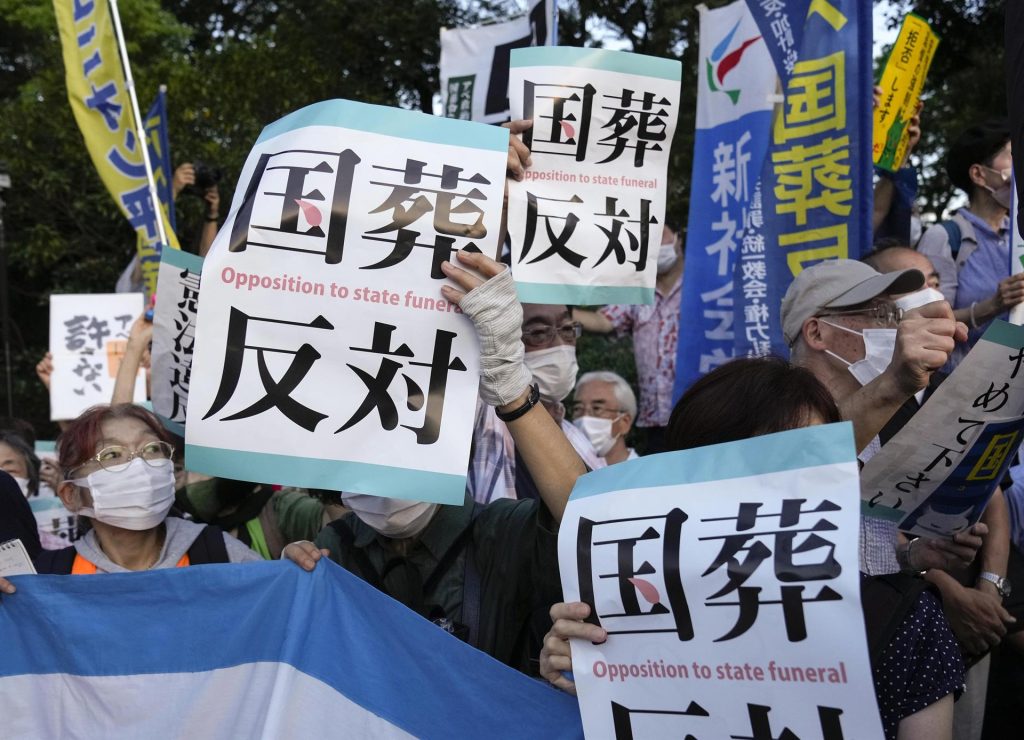 An elderly man set himself on fire today near Tokyo’s Kantei, the official residence and office of Japan’s prime minister – apparently in protest of next week’s state funeral for former leader Shinzo Abe.

Police attended at the scene around 7am local time, put out the fire and transferred the man – who was initially unconscious – to a hospital, said government spokesman Hirokazu Matsuno in press conference.

A note found at the scene said ‘I personally am strongly opposed’ to next Tuesday’s funeral and the man aged in his 70s told police he had doused himself with fuel and set himself alight, according to Kyodo news.

Images broadcast by various media outlets showed burned grass at the scene, and a firefighter suffered burns to one arm – but there was no damage to surrounding buildings, according to reports from the authorities.

Police were investigating the images recorded by security cameras in the area and questioning witnesses.

Abe died on July 8 at the age of 67 after he was shot while giving an election campaign speech in Nara.

According to surveys carried out by various local media, around half of Japanese are opposed to the holding of a state funeral.

Demonstrations against it have been intensifying as the event approaches.

On Monday, some 13,000 people protested in Tokyo’s Yoyogi Park, despite heavy rain from Typhoon Nanmadol, to demand the event’s cancellation. The demonstration was also attended by members of the opposition.

The funeral will take place at the iconic Nippon Budokan stadium in Tokyo and will cost at least ¥1.65 billion (about US$11.5 million), according to figures published by the Japanese government – which says the cost includes security at the funeral as well as for diplomats and guests during their stays.

It will be the second such funeral in postwar Japan since Shigeru Yoshida’s in 1967.

Abe’s family already held a private funeral at Tokyo’s Zojoji Buddhist temple in July that attracted thousands, including members of his party, the opposition and diplomats.