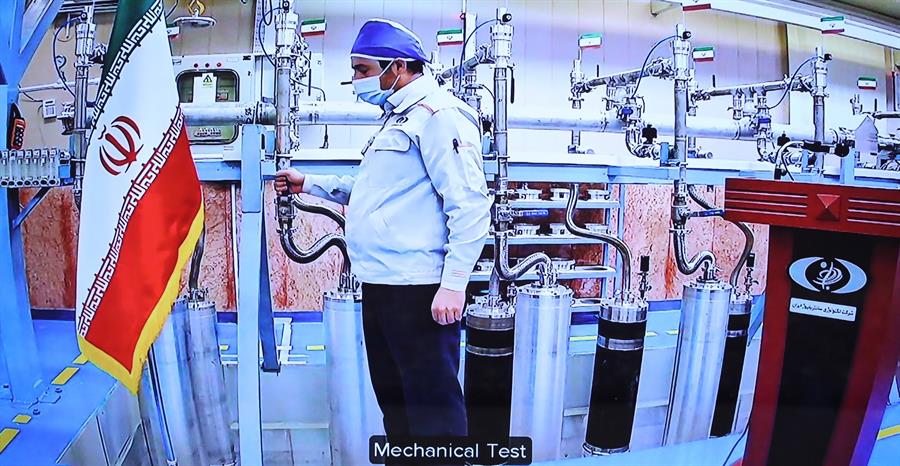 Television Channels 11 and 13 said that, according to “Western intelligence sources,” the blackout was not an accident but rather was due to an Israeli cyberattack carried out by Mossad, causing damage significantly greater than what was reported by Iranian authorities.

The report coincides with a change in the description of the incident by the Atomic Energy Organisation of Iran – which at first called it an “incident” that did not cause any damage, but later changed its stance to call it “nuclear terrorism.”

If the report is confirmed, this would be the second attack of its kind in less than a year against Natanz – after sabotage carried out in July 2020, with assorted sources pointing to Israel as the author.

The event comes amid an increase in tensions between the two countries, who in recent weeks have exchanged accusations of attacks or sabotage after a series of explosions in their cargo ships.

Israel’s acting prime minister Benjamin Netanyahu, making no mention of the alleged cyberattack, yesterday said the struggle against Iran and its satellites and against Iran’s weapons programme is an enormous task.

Meanwhile, US defense decretary Lloyd Austin – who is on an official visit to Israel – after meeting with defense minister Benny Gantz in Tel Aviv yesterday said Washington’s commitment to Israel is “enduring and ironclad” and is scheduled to meet with Netanyahu later today.

Iran yesterday said the power blackout at its Natanz uranium enrichment plant was an “act of terror” aimed at undermining the ongoing negotiations to save the 2015 nuclear deal.

The head of Iran’s nuclear agency, Ali Akbar Salehi, urged the International Atomic Energy Agency (IAEA) to act “against this nuclear terrorism,” warning his country “reserves its right to take action against perpetrators and agents” responsible for it.

“To defeat the goals of the terrorist attempts, the Islamic Republic of Iran will continue to develop nuclear technology on the one hand and try to lift oppressive sanctions on the other hand,” he said, according to the state-run IRNA news agency.

The incident occurred in the power distribution network of Natanz, a 100,000-sqm underground facility located in central Iran.

The incident, however, “has led to no pollution or human damage,” Atomic Energy Organisation of Iran spokesman Behrouz Kamalvandi said, adding that the causes are “under investigation.”

He did not reveal whether the power cut affected the entire facility or just a part of it.

The power outage brought to mind a fire that broke out in a centrifuge assembly area at the Natanz facility on 2 July 2020, a blaze that caused major equipment destruction.

The IAEA has access to Natanz – and other Iranian nuclear plants – to inspect Iran’s nuclear programme as part of the 2015 nuclear deal Tehran signed with the UN Security Council’s five permanent members plus Germany in exchange for lifting sanctions on the Islamic Republic.

Former president Donald Trump withdrew the US from the pact in 2018 and re-imposed sanctions on Iran.

Salehi did not blame any specific party for the incident, but the power outage reportedly has been linked to Israel. A virus believed to have been developed by the US and Israel was used to attack the facility in 2010.

Several Israeli media outlets reported the blackout was the result of a cyberattack, while a member of the Iranian Parliament’s Energy committee, Malek Shariati Niasar, described what happened as “very suspicious.”

“This incident on National Nuclear Technology Day and amid Iran’s efforts to force the West to lift sanctions is highly suspected of (being) sabotage and infiltration,” he posted to his Twitter account.

Earlier this week, meetings aimed at saving the 2015 deal were held in Vienna between the signatories. Iran has resumed uranium enrichment activities in the wake of Washington’s withdrawal from the pact.

A US delegation is participating in the negotiations, which will continue next week, albeit through intermediaries, given that Iran has refused to engage in direct dialogue with the Americans.

The deal, which is strongly opposed by Israel, allows Iran to use its first-generation centrifuges and to produce uranium enriched to the 3.67% level, but Tehran has exceeded both limits as its response to the US sanctions.

On Saturday, Iran injected gas into a cascade of 164 IR-6 centrifuges and in one of 30 IR-5 centrifuges, while a mechanical test was carried out in IR-9 centrifuges at Natanz.

The head of Iran’s nuclear agency said that the “desperate” attempts by “Iran’s enemies” to disrupt uranium enrichment and other activities at Natanz are reflective of Tehran’s adversaries’ “failure” to succeed in industrial and political efforts.