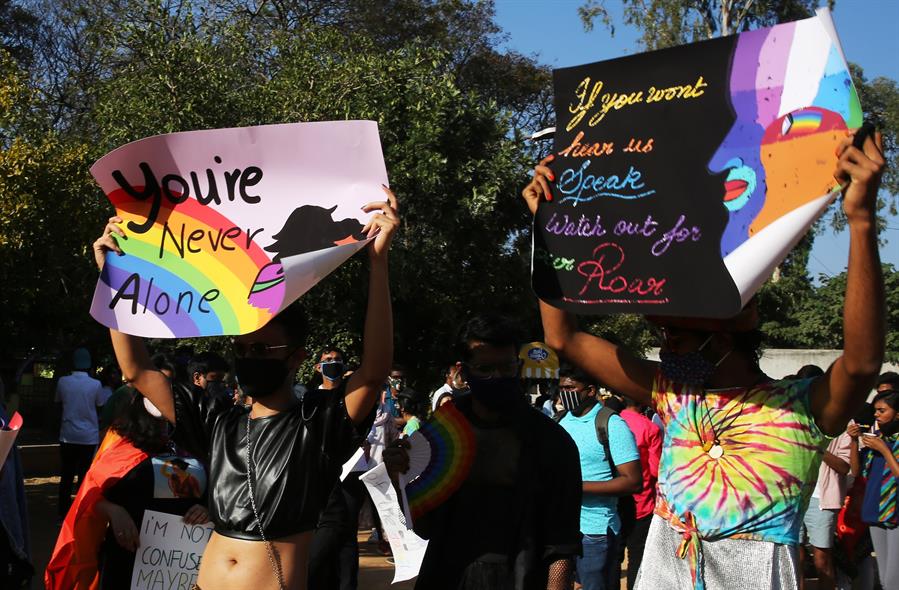 Outraged LGBT activists today vowed to intensify their rights campaign after the government refused to recognise same-sex marriage – because it is incompatible with Indian ethos.

In response to a plea by rights activist, the government yesterday told a Delhi court that matrimonial affairs are governed by religious laws as per faith-based customs – which recognise only the union of a man and a woman for a statutory sanction.

“Personal laws recognise only heteronormative marriages. Interference in this would cause havoc with the delicate balance of personal laws,” the government said.

Gay and lesbian rights activists had urged the Delhi high court to validate marriages between any two persons “neutral to gender identity and sexual orientation” solemnised under the Special Marriage Act.

The government, in an affidavit, said gay and lesbian people “cannot claim a fundamental right for same sex marriage being recognised under the laws of the country”.

“We are deeply disappointed with the government’s affidavit because we had hoped that it would learn from the judgment of the Supreme Court and understand that LGBT people are the citizens of the country,” said Arvind Narrain, a lawyer and writer in Bengaluru.

Narrain, a well-known activist who has been campaigning for the rights of the marginalised and discriminated, said the government has shown its “inability to be sensitive to the concerns of the present or to the needs of the contemporary Indian citizens.”

He said the government’s position indicated it was against the rights of all minorities. “It is a statement of hatred, animosity and disgust towards LBGT people like they treat people from every other minority grouping in India.”

Praful Baweja, a co-founder of ‘6 Degrees’ – a networking platform for the LGBT community – said the government had left no ambiguity on its stand.

“It doesn’t defeat us. It has made our resolve stronger,” Baweja said, adding their task now is “to increase the public support”.

The activists said whatever had been granted to the Indian LGBT community in the past was because of court interventions and the government had only followed these instructions.

For example, being gay was a criminal offence in India under archaic British law. The country’s top court in 2018 struck down Article Section 377, a hangover from the period of British colonial rule that banned same-sex sexual relations.

But rights activists say discrimination remains and progress has been slow in the world’s second-most populous nation that has no official estimate of the number of gay or transgender people.

India’s Supreme Court recognised “transgender” as a third sex in the 2014 ruling and in July 2019, the government of prime minister Narendra Modi introduced a bill to enshrine the rights of trans people.

The bill passed in the lower house of parliament and is now in the upper house.