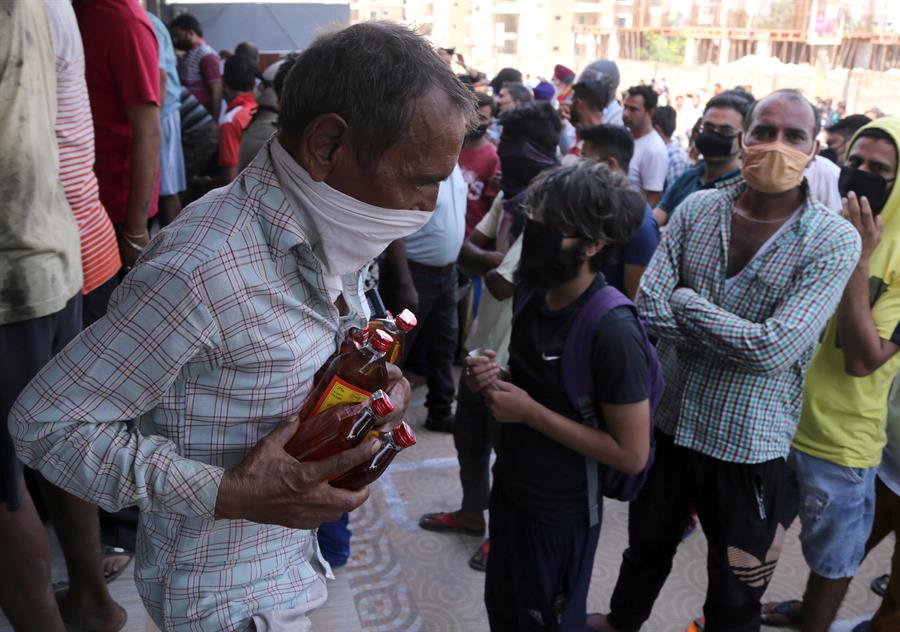 At least 10 people died in southern India after consuming a sanitiser, amid restrictions on the sale of alcoholic beverages during the Covid-19 crisis, the authorities reported yesterday.

Several men in Kurchedu, in the state of Andhra Pradesh, drank large quantities of an alcohol-based sanitiser – causing the death of at least 10 of them within a few hours, said district police superintendent Siddharth Kaushal.

The deceased “were mostly workers. Some others who also consumed the same product were unharmed, maybe because they consumed a lesser amount or better pre-existing health,” the police chief explained.

Kaushal, who initially ruled out a case of “obvious criminal negligence,” said the authorities were carrying out an investigation into the matter and “planning some social interventions, along with other government departments, to avoid such occurrences in the future.”

The incident comes amid the prohibition on the sale of alcoholic beverages imposed by the state authorities as part of the confinement measures to check the spread of the novel coronavirus.

The authorities in the northern state of Punjab also yesterday reported the death an unspecified number of people who presumably died due to consumption of adulterated alcohol across several districts.

“I have ordered a magisterial enquiry into suspected spurious liquor deaths in Amritsar, Gurdaspur and Tarn Taran (…) Anyone found guilty will not be spared,” tweeted Punjab chief minister Amrinder Singh.

Local media, citing police statements from all three districts, reported at least 21 people have died this week in Punjab due to alcohol poisoning.

The consumption of illegal and adulterated alcohol tends to occur in areas of rural India, with people drawn to it because of its cheap price tag.

The worst alcohol poisoning in the last decade happened in Dec. 2011 in the eastern state of Bengal, where more than 130 people lost their lives after drinking alcohol acquired near a railway station.

While India is in the third phase of lifting restrictions imposed due to the Covid-19 crisis, several states maintain bans on the sale of alcohol, and have declared local curfews to contain the spread of the coronavirus.