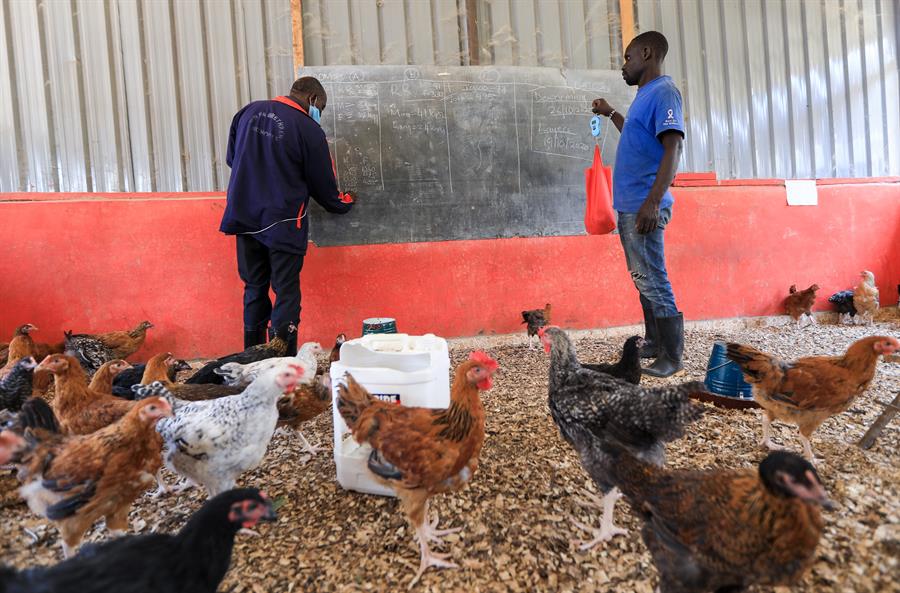 The blackboards at Roka Prep School in central Kenya, where classes have been suspended since the start of the Covid-19 pandemic, still have unfinished English exercises scribbled in chalk.

But today there are no pupils, desks or chairs — just dozens of clucking chickens.

This private primary school in Mwea, a village around 100km north of Nairobi – like others in the region and around the country – has converted its classrooms into hatcheries and its playground into a vegetable garden, where two teachers have traded in their chalk and textbooks to grow “sukuma,” a type of kale, a spinach.

The academic year in Kenya was written off due to the coronavirus, and private institutions like this one, deprived of their turnover from school fees, have started looking for alternative sources of revenue.

“I was not shocked; I was expecting it,” said James K. Kung’u, head of Roka Prep School, inside an empty classroom.

Observing the spread of the disease in Asia, Europe and America, he “was expecting it”.

“I could see it coming but it came faster than anyone could have expected.” Kung’u thought it wrong that the schools were forced to shut “prematurely” on March 15, before the semester was over.

“Every morning I wake up early, I go to school — there are supposed to be children there, but they are not there,” says the 70-year-old headmaster, who founded his own school after 40 years dedicated to teaching. “I feel bitter.”

At first it was just a temporary measure, a 30-day closure that was extended indefinitely – until the education minister George Magoha, in July finally said “the 2020 school calendar year will be considered lost due to Covid-19 restrictions,” a decision without parallel anywhere in the world that has badly affected some 18 million Kenyan students, as well as their teachers.

“We were left jobless, we were left with nothing we could do,” Kung’u says.

The headmaster took matters into his own hands, and moved to convert the school into something more productive amid the coronavirus shutdown.

“When he came back with this idea early May, we were reluctant and we kept asking him: where will our learners play?,” says Moses Wandera, a young teacher who now spends his days watering and harvesting.

Now, in the “play corner” inside a kindergarten class, preschool children have been replaced with baby chicks that are barely one month old.

As they grow, they will be moved into other rooms until they reach the final class – which instead of primary pupils preparing to make the scary leap to secondary school is now occupied with roosters and chickens that will soon go to market to be sold.

Barely 1km away, another private school is following in Roka prep’s footsteps, although with more ambition.

“Welcome to Mwea Brethren former school!”, director Joseph Maina greets visitors. “Now it is a chicken farm!” he says excitedly, while over the phone he completes an order of 4,000 chicks that will be added to the thousand he already has since he started the poultry venture back in June.

On the blackboard at this school, there is no trace of Swahili conjugations or maths tables. They have been replaced with vaccination calendars and feeding charts.

“Will the school reopen?”

Maina takes a moment to consider his answer. “It depends,” he says, “on the (coronavirus) measures and the support we get from the government.”

There are nearly 90,000 educational institutions in Kenya, ranging from kindergarten to secondary school – a third of which are private.

In recent decades, primary attendance figures have multiplied, exceeding 90% in 2016. But while the number of public schools has grown by only 13%, private schools have sprouted up all over the country, with a growth of more than 64%.

“The overcrowding of public school really messed up the standards and social distancing even before Covid-19. Families were already overstretched,” says Ken Ramani, education expert and communication director for the Technical University of Kenya.

“A public school has one toilet for 200 kids and there are no proper washing facilities,” Ramani says. “The teacher cannot personalise learning as no teacher is going to give special attention to a kid, because there are maybe 60 in one class.

“It is a challenge that forces some of us to go to private schools, where at least there is no congestion, kids can have better meals and personalised attention.”

Without the regular stream of revenue from tuition fees because of Covid-19, many of these private education centres are in dire straits.

“Many private schools will not reopen,” Maina and Kung’u warn. The former says how he heard of one director had sold his house and was sleeping in the classrooms of his empty school, and is now a travelling salesman;

Kung’u tells the story of another director of a nearby school who committed suicide.

“In the private sector, we are assisting the government to educate its citizenship,” Kung’u says. “If there were no private schools, where would all these children be receiving their education?”

Many of the more exclusive schools in Nairobi and other large cities have turned to providing classes online.

They tried this at Roka Prep School: Wandera describes how they created a WhatsApp group, but “it was very challenging because not all learners could get access, most of them were active, but giving homework or giving instructions to all of them was quite a challenge. (…) So we stopped the online teaching, and we started digging” crops instead.

“From where I stand, it is a miracle. We are still a developing country,” Kung’u says, adding that in many rural parts of the country there are students who have not even seen a smartphone.

Vincent Njuki, a 19-year-old from Mwea, is getting ready to start university next week. He will be studying education, but the course will be held online, on his mobile phone.

“I don’t know how it is going to be because online classes (…) I don’t think it will work.”

Months away from the routine — and boredom — of school have also taken their toll on students, who have turned to other activities to stay occupied.

“I even got bored of studying,” admits 14-year-old Rita Angela Wambui. “I started doing other things like farming in our home because I went through all the syllabus and I got tired, and I have almost forgotten everything that I read!”

“Parents are working, the children are left at home, nobody takes care of them, so they will engage in very bad things,” warns the headmaster of Roka, who points out that teenage pregnancies have risen during the lockdown.

“There will be a lot of work to reconnect them to school, it will be hard to make them understand that they are not at home,” Kung’u says.

Following his announcement in July, the education minister said this week that schools would be permitted to reopen in November so students can finish their leaving certificate examinations.

The return will not be an easy one. “Learning facilities are not going to be constructed overnight, they haven’t done it since March and it won’t happen even in the next 3-4 years,” Ramani says.

“We pray that this virus will go away because social distancing is a miracle, it is not going to happen.”

In November, the owners of Mwea Brethren School plan on selling their older chickens, while at Roka, the headmaster says he can convert the vegetable patch back into a school yard in only two hours.

But neither school wants to go back to solely relying on education for survival. “Tough times will not last, this will not last forever,” Kung’u says.