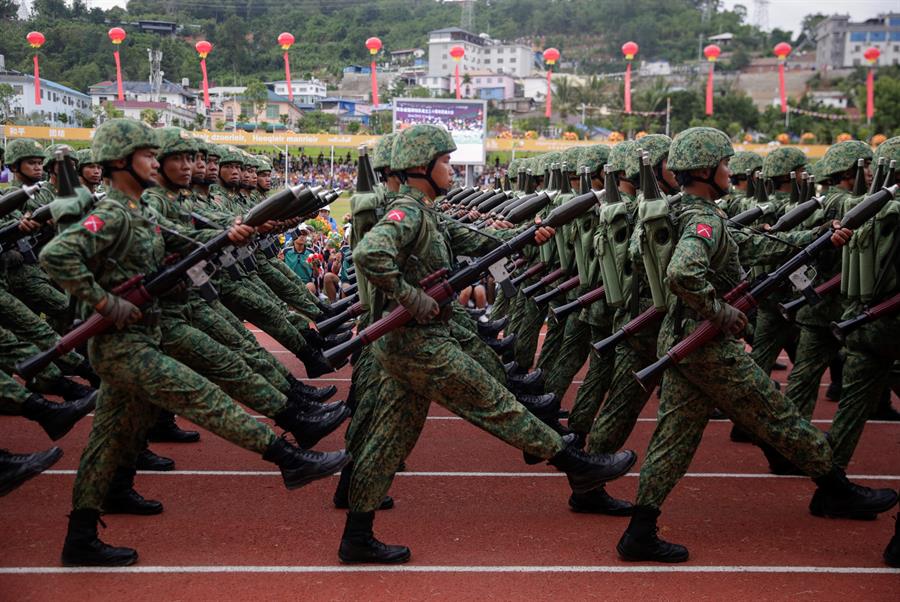 Citing one of the latest known such incidents, the rights group said two boys lost their lives last month when the military forced a group of farmers to walk as they cleared a path through mines during an operation against the insurgent Arakan Army in Rakhine.

A third suffered injuries as the fighting broke out, HRW said.

The army has vowed to investigate the deaths of the two boys – whose identities were undisclosed – although it is known they belonged to the persecuted Rohingya ethnic group.

Manny Maung, an HRW researcher, said the Tatmadaw – the official name of the armed forces of Myanmar – had “a long history of using children in armed conflict.”

“It is deplorable to use innocent civilians in this way, let alone children. Myanmar needs to publicly call for its armed forces to stop using these sickening practices and prosecute those who do,” Maung said.

The nonprofit said in a statement yesterday the latest incident showed the army was still using “children in hostilities.”

The group called for an impartial and independent investigation and alleged the military had “repeatedly failed to do so when its soldiers are accused of violations.”

The HRW recalled that UN secretary-general Antonio Guterres in June decided to remove the Tatmadaw from his annual “list of shame,” which includes countries that perpetrate human rights violations against children.

It said Guterres took the step despite the “UN’s continued documentation of the military’s recruitment and use of children.”

Over the past two years, Rakhine has witnessed a growing conflict between the armed forces and the Arakan Army, an ethnic-nationalist militant group fighting for the autonomy of the predominantly Buddhist majority state.

The clashes with the Arakan Army led to the cancellation of the Nov 7 general elections in northern Rakhine and some other areas in the centre and south of the state.

More than a dozen rebel groups are fighting for autonomy in different parts of the country since its independence in 1948.

Myanmar military blamed the Arakan Rohingya Salvation Army (ARSA) rebel group for a series of attacks in Rakhine in 2017, following which the army launched a brutal campaign that led to a massive Rohingya exodus to Bangladesh.

Nearly 738,000 Rohingya refugees have been living in Bangladesh refugee camps after they escaped the wave of persecution and violence that the UN has described as a textbook example of ethnic cleansing and genocide.

The Rohingyas are a mainly Muslim minority. The Myanmar government has denied them citizenship since the 1990s.

They have faced long-standing official discrimination as they are considered illegal Bangladeshi immigrants, despite having lived in Myanmar for generations.

The 2017 military offensive, which has led to criminal cases against Myanmar in the International Court of Justice, almost eliminated the ARSA.