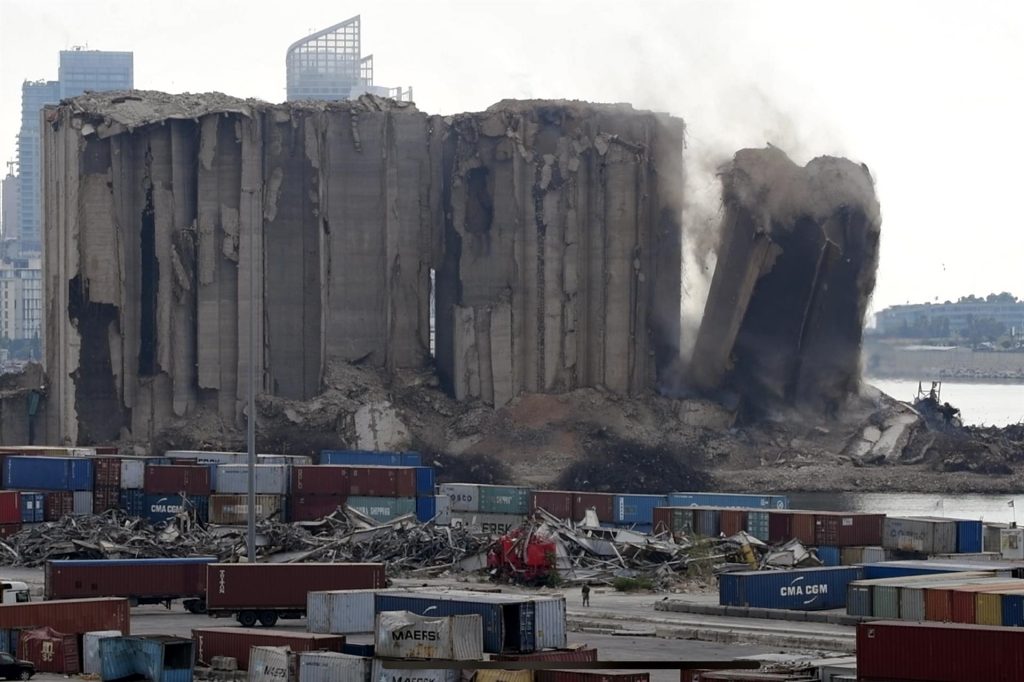 Grain silos at Beirut port, rocked by a massive explosion two years ago, suffered yet another collapse yesterday as hundreds took to the streets to mark two years since the blast.

A large cloud of dust spread across the area after the collapse just as the Lebanese protesters marched in three directions in Beirut to demand justice for the more than 200 people dead and 6,500 injured in the explosion that took place on 4 Aug 2020.

One of the marches started from the fire brigade headquarters in Karantina, a facility adjacent to the port whose teams lost 10 members while trying to extinguish the fire that caused the explosion.

A couple of hundred people gathered there, some of them wearing white clothes with red stains to symbolise the blood spilled in the tragedy while others carried pictures of the victims and Lebanese flags.

Protesters held up signs reading “We will continue to fight for justice until we meet again” and “We need justice on the same scale as the disaster.”

The investigation into the explosion has been blocked since December by a number of high-ranking officials suspected of negligence in the case.

NGOs and relatives of the victims are demanding an international investigation due to the lack of progress in the Lebanese judicial process almost two years after its beginning and called on the UN Human Rights Council to send an investigative mission to Beirut.

The tonnes of ammonium nitrate that exploded had been improperly stored for years in a warehouse located just metres from the port and leaders – such as president Michel Aoun and then prime minister Hassan Diab – admitted they knew of its existence before the blast.

Another march took off from the centre of Beirut, while the third from the Beirut Palace of Justice and made a stop outside the French embassy to seek support in their fight for justice.