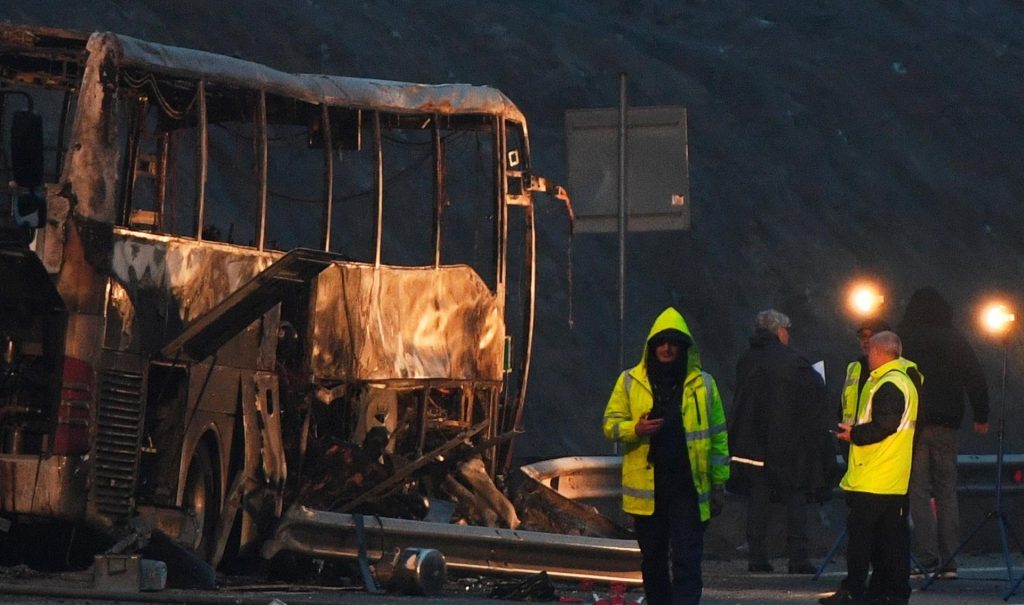 A total 46 people, including 12 minors, were charred to death early today when a bus caught fire on a highway in western Bulgaria, the country’s interior ministry said.

The incident occurred around 2am near the town of Bosnek, about 40km south of the capital city of Sofia.

Interior minister Boyko Rashkov revealed that bodies of the victims were completely burned at the scene of the accident, according to BTV broadcaster, which aired footage of the burnt chassis of the bus.

Seven people managed to survive by jumping out of the vehicle. They were taken with burns and minor injuries to a hospital in Sofia, where they are reportedly in a “stable” condition.

The charred vehicle, carrying at least 52 people, including two drivers, had North Macedonian licence plates and was returning from a sightseeing tour of Istanbul, Turkey.

The accident, the causes of which are being investigated, occurred on the Struma highway, linking Sofia to Blagoevgrad, from where the bus was to head to the North Macedonia border.

The North Macedonian government was immediately informed of the situation, following which several officials including prime minister Zoran Zaev and foreign minister Buyar Osmani travelled to Sofia and the scene of the accident.

Osmani visited the survivors of the accident in Sofia at the Pirogov emergency hospital, where he confirmed to the local press that the bus passengers were ethnic Albanians from his country.

Bulgaria’s interim prime minister Stefan Yanev, addressing the press, called the incident a huge tragedy, and hoped to learn from it and avoid similar accidents in the future.

Preliminary police reports indicate the bus may have hit a curb or railing, following which an explosion occurred that destroyed the vehicle completely.

Rashkov said they are not ruling out the possibility of the driver having fallen asleep or dying before the rest, explaining why he could not have opened the doors for travellers to escape.

According to the Bulgarian press, four buses from a tourist company in North Macedonia were travelling together and entered the country through the Kapitan Andreevo checkpoint on the Bulgarian-Turkish border.