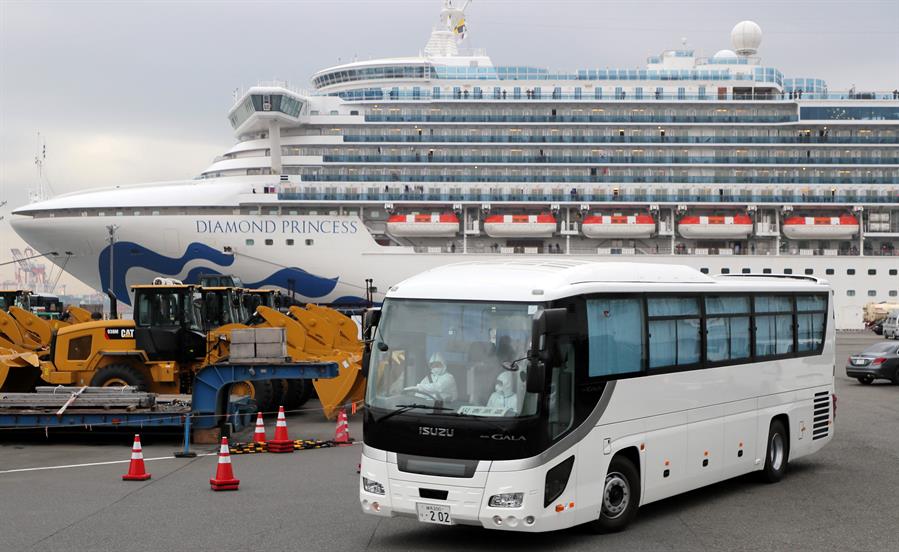 Passengers began disembarking today from a cruise ship in Japan after completing a government quarantine period that revealed 542 coronavirus infections on board.

At about 11am local time, the first passengers began to leave the Diamond Princess – which had arrived at the port of Yokohama on Feb 3 and was quarantined after the detection of at least one case of Covid-19 in a man who disembarked in Hong Kong.

About 500 passengers were expected to disembark throughout the day, as long as they had tested negative for the virus, did not show symptoms and had not shared a cabin with an infected passenger.

In total, 3,711 people were aboard the Diamond Princess – including 2,666 were passengers and 1,045 crew members. Among the passengers were 1,281 Japanese, and the rest from around 50 countries. The disembarkation is expected to continue until Friday.

Many infected people who were on the ship had earlier been transferred to medical centres and dozens more that tested negative had been repatriated to their respective countries.

The approximately 2,500 remaining passengers will have to wait to disembark until Friday, provided they test negative for the coronavirus.

Among them is a Japanese woman who recounted her “boredom” on being locked in her cabin for more than two weeks, while expressing her understanding regarding measures taken by authorities “because there was no other option with so many passengers on board.”

Those disembarking the ship were received by health ministry officials wearing protective suits and masks. They accompanied the passengers to taxis and buses waiting to transfer them to various sites.

Due to the large media contingent around the ship in the Yokohama port where it is moored, Japanese authorities erected a security cordon to protect the identity of those on board.

All passengers who left the ship, meanwhile, will be monitored over coming days to see how their health evolves, while those infected have been transferred to medical facilities.

Early today, seven South Koreans and one Japanese spouse evacuated from the ship by South Korea’s government landed in Seoul. None of them showed symptoms, but will be quarantined for 14 days.

Several passengers documented their leaving the ship by posting photographs and videos on social media, expressing relief and thanking the crew of the Diamond Princess.

“NEGATIVE! Me, son, husband, mom and dad! Thank you Lord for protecting us… So emotional now!” Diamond Princess passenger Yardley Wong wrote yesterday on Twitter next to a picture of her medical test.

Last night, 542 people on the Diamond Princess had tested positive for coronavirus. Aside from the ship’s cases, Japan has 61 confirmed Covid-19 cases, according to the latest data.

Japan’s management of the health crisis has generated criticism from numerous health experts, and has led several countries to request the evacuation of their citizens before authorities allowed passengers to disembark.

The first was the US, which on Sunday repatriated some 380 of its citizens from the cruise ship with the aim of protecting their apparent safety and well-being. Others such as Australia, Canada or South Korea followed suit.

Kobe University’s professor of infectious diseases, Kentaro Iwata, who visited the ship this week, said the measures to control infections on board were inadequate as people could move freely without restrictions or delimitation of virus-free zones, among other reasons.

“I am concerned that passengers [from the Diamond Princess] will go straight home,” said Yokohama resident Nobuhiro Maeda, adding he feared that the virus could have already spread to the streets.

Japanese authorities said they would continue to monitor the health status of those who leave the ship, including those who have refused to be tested for the virus.