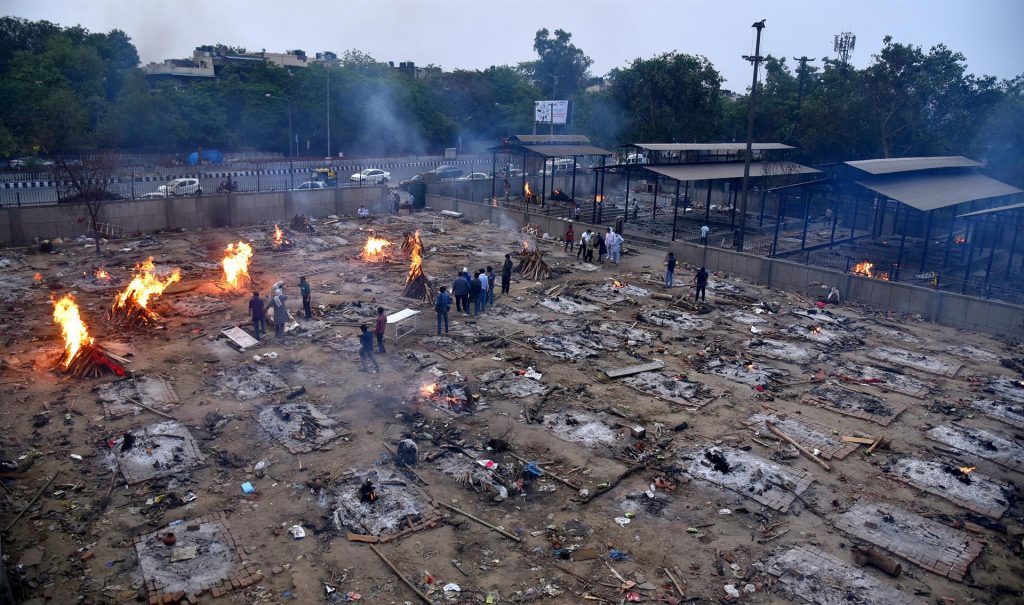 India reported a new daily record of Covid-19 deaths today with over 3,689 fatalities, a day after the country crossed 400,000 daily infections for the first time.

India now has 215,000 total deaths from the coronavirus since the start of the pandemic, which is the fourth highest in the world behind the US, Brazil and Mexico.

Daily cases overnight dipped slightly to 392,488, the first drop in several days, taking the total infections to more than 19.5 million, according to data from the Health Ministry.

The infection curve has become accustomed to breaking record after record in recent weeks, with no peak of this second wave in sight and with hospitals saturated, frequent calls for help in search of oxygen and overflowing crematoriums.

The situated has prompted more than 40 countries to send aid, as medical supplies arrived from Germany, Uzbekistan, the US and Belgium, among others.

A total of 9,000 antivirals of Remdesivir have arrived from the EU, along with 120 ventilators, 28 tons of medical equipment, oxygen generators for medical facilities, oxygen cylinders, concentrators and regulators, among other supplies.

Several parts of the country has reported acute shortages of oxygen, especially the Indian capital.

New Delhi reported 25,219 fresh infections and 412 deaths in the last 24 hours, causing chief minister Arvind Kejriwal to extend lockdown for its more than 20 million residents for the third straight week.

The country sees its vaccination campaign as the greatest help out of the crisis, especially with the new phase that began yesterday, in which shots were extended to all those over 18 years of age, although some regions announced they would not be able to start due to the lack of vaccines.

The vaccination rate has been slow since the campaign began in January, with some 157 million doses administered so far, 1.8 million of those in the last 24 hours.

But the huge inoculation effort may still not be enough for its 1.4 billion people – because the federal government has now allowed charges to be imposed.

Previously, government vaccines have been free, and private hospitals have been permitted to sell shots at a price capped at 250 Indian rupees (US$3); vaccine companies are now allowed to charge state governments directly – potentially disadvantaging the poor who cannot afford to pay.

Worse, the vaccines are in short supply as India’s production capacity with Serum Institute of India for the AstraZeneca vaccine is also meant for the CoVax (Covid-19 Vaccines Global Access) initiative – to be distributed to 92 low- and middle-income countries.

With local demand spiralling, doubts arise whether India can meet its earlier promise to supply 200 million CoVax doses, with options for up to 900 million more by year-end.