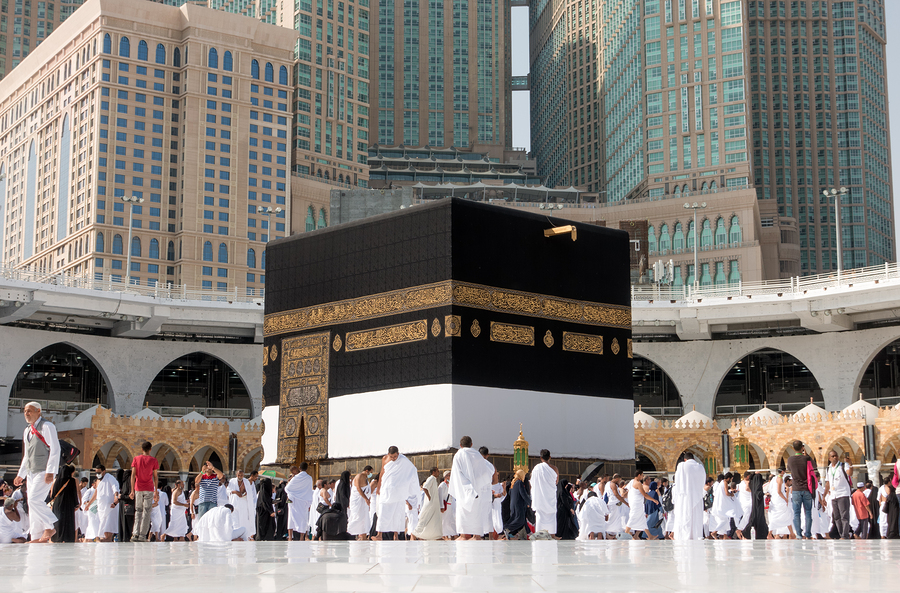 A little over 1,000 residents of Saudi Arabia are awaiting the start today of rituals as part of the annual haj pilgrimage in the Muslim holy city of Mecca, which this year have been drastically downsized due to strict measures to prevent the spread of the coronavirus.

Saudi authorities have limited the pilgrimage to just over 1,000 Muslims – compared to over two million last year – 30% of whom are Saudis, while the rest are from 160 nationalities living in the kingdom – includinng eight Malaysians.

Only Saudi healthcare professionals will be allowed to take part in the rituals in recognition for their role fighting the Covid-19, which has infected nearly 270,000 people and has left 2,760 dead in the kingdom.

The security forces have been ready since July 6 to secure the pilgrims and ensure only authorised people access the holy sites, head of the Hajj Security Committee Khalid bin Qarar Al-Harbi, said yesterday.

Over the past few weeks, the lucky pilgrims have arrived at the hotels, undergone medical tests and been put under the mandatory quarantine before the rituals begin today.

Each pilgrim has to wear an electronic armband to ensure they have gone through quarantine before taking part in the rituals.

This year, no representative for the Saudi government will take part in the haj.

Hundreds of workers are tasked with cleaning the facilities, over several shifts, to make sure the holy places are always sterilised.

In the ritual that involves throwing pebbles at three columns representing the devil’s temptations, the stones will be collected so no one comes into contact with them after they have been touched by the pilgrims.

The authorities have also established mechanisms to help pilgrims keep social distancing during every stop in the three-day rituals.

The Saudi Health Ministry has prepared five mobile clinics that will accompany the pilgrims and will carry out rapid coronavirus tests, among other health services.

Every year, emergency services attend to pilgrims who feel sick because of disease, exhaustion, high temperature or old age.

Haj is one of Islam’s so-called five pillars that all able-bodied Muslims must perform at least once in their lifetime if their financial conditions allow it.

The pilgrimage has been affected by other epidemics, as in 2014 when an Ebola outbreak in West Africa prompted the Saudi authorities to ban people from Liberia, Guinea Conakry and Sierra Leone, among others.

Meanwhile in KABUL, the Taliban yesterday announced a three-day ceasefire in Afghanistan for the Muslim festival of Eid al-Adha – a move which was welcomed and reciprocated by the Afghan government.

“For our compatriots to spend the days and nights of Eid in security and happiness, all fighters are directed not to carry out any attacks and offensives against the enemy (Afghan security forces) during the three days of Eid-ul-Adha,” Taliban spokesperson Zabihullah Mujahid said in a statement.

“If the enemy carried out any attack against you, then give them a strong response,” the Taliban spokesperson added.

The festival of Eid-ul-Adha, one of the biggest holidays of the Islamic calendar and marked by slaughtering animals such as sheep and goats, begins on Friday.

This is the third ceasefire in the past 19 years of war in Afghanistan and comes amid preparations for peace talks between the rebels and the government, which responded to the announcement by declaring a corresponding three-day truce.

Kabul has been making efforts to clear the path towards the commencement of the intra-Afghan talks to usher in peace in the country along the lines of an agreement signed between the US and the Taliban on Feb. 29 in Doha.

According to the agreement, Washington would pull its troops out of Afghanistan by mid-2021 in exchange for security guarantees from the Taliban.

However, the intra-Afghan talks, originally scheduled to begin on March10, have been delayed by disagreements between the insurgents and the government at Kabul regarding a prisoner swap process, a precondition for starting the talks.

Afghan and Taliban officials have been holding negotiations to complete the exchange of 5,000 Taliban prisoners for 1,000 Afghan security forces captured by the insurgents so that the talks may begin.

The Taliban spokesperson in his truce message also instructed insurgent fighters not to venture into government-controlled areas and also asked the Afghan security personnel to visit or enter the Taliban held areas.

The decision by Taliban to call a temporary truce came as the violence has escalated in recent weeks in the country, following a three-day ceasefire on Eid-ul-Fitr, another Muslim festival, from 24-26 May this year.

Muslims around the world would be celebrating the festival this week by slaughtering livestock and distributing meat among neighbors, family members, and the poor to commemorate the Quranic tale of the Prophet Abraham’s willingness to sacrifice his only son before the will of God.