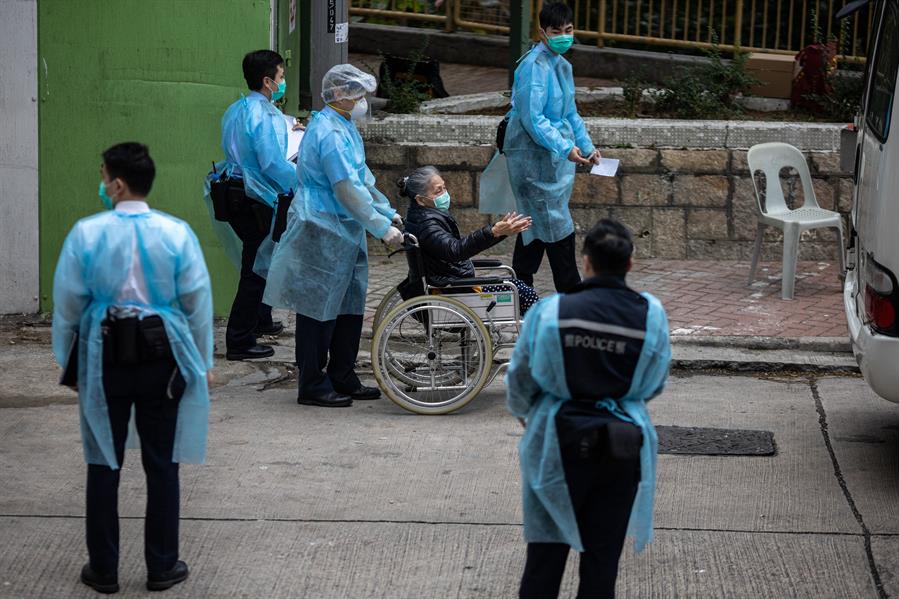 A toilet pipe in a Hong Kong high-rise is believed to be the culprit for the transmission of the deadly coronavirus in two confirmed cases involving elderly residents who lived 10 floors apart.

In a message published last night on the Tamar Talk Facebook page, the Hong Kong government called for people not to panic – hours after a 62-year-old woman at the state-run Cheung Hong Estate on the small island of Tsing Yi was diagnosed with the Wuhan virus.

On Jan 30, a 75-year-old man living 10 floors directly above the woman tested positive for the virus.

Though seemingly unrelated, both cases are now believed to be linked because of a vent pipe that had been altered in the woman’s flat.

The diagnosis of the woman’s infection led to the emergency evacuation in the early hours yesterday of more than 100 residents in 35 households who share the same piping system with the flats of the elderly patients. Evacuees have now been placed under quarantine.

Shortly after the evacuation, Hong Kong’s health authorities confirmed at a press briefing the design of the pipe in the woman’s flat had been modified and the pipe had not been properly sealed.

“Specialists and the authorities concerned are thoroughly probing how the virus was transmitted,” the government said in the Facebook post.

“The possibility of transmission through human contact, saliva and the air cannot be ruled out, but the reason could also be that the resident altered the toilet vent pipe, leading to air leakage and then the infection.”

The evacuation linked to the toilet pipe issue has sparked public concerns both cases might herald a full-blown outbreak of coronavirus similar to the rapid transmission of the severe acute respiratory syndrome (SARS) virus at Amoy Gardens in Kowloon in 2003, which was believed to be related to the design of some U-shaped water pipes at the private residential estate.

But Hong Kong’s leading microbiologist Yuen Kwok-yung has reassured locals the diagnosed cases in Tsing Yi were “absolutely” not a repeat of the Amoy Gardens outbreak because the current circumstances are not the same.

As of this afternoon, Hong Kong registered 50 confirmed cases – including the son and daughter-in-law of the 62-year-old woman, and the daughter-in-law’s father.

A 25-year-old male patient was discharged from a hospital today, while four patients in their 60s were in a critical condition.

On Feb 4, a 39-year-old man with a chronic illness died four days after testing positive.

China raised the death toll of the new coronavirus, now named COVID-19, to 1,113 of the 44,653 infections detected in the country.

The National Health Commission said that until midnight, 8,204 severe cases had been recorded while 4,740 people had recovered from the disease and been discharged.