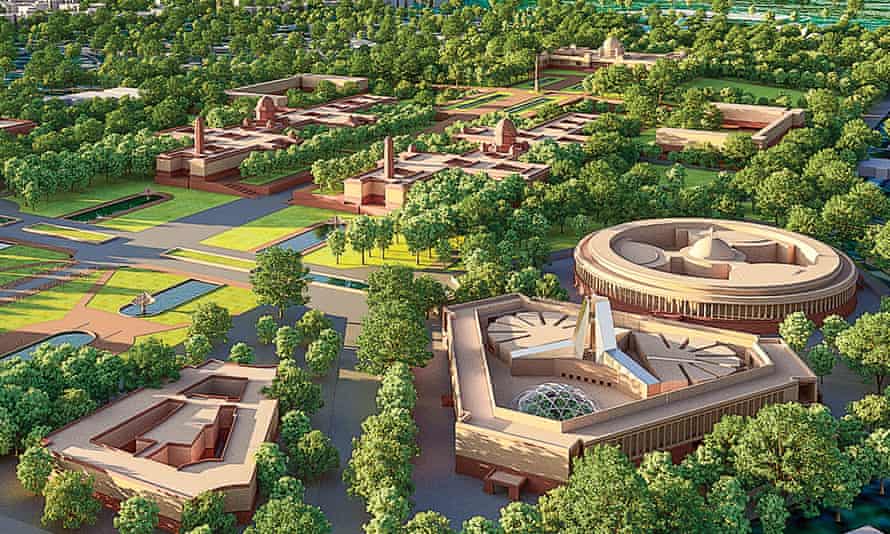 Despite the pandemic and extreme temperatures, the renovation of the iconic Rajpath boulevard – the seat of power in India –  continues for a new parliament and a set of new ministry buildings in a project worth US$2.68 billion mired in controversy.

The Central Vista project, to redesign the former centre of British colonial power, is situated between the presidential palace and the India Gate, two of the most famous monuments of the capital city.

“The redevelopment was necessary 20 years ago,” said architect in charge of the project, Bimal Patel, at the project site.

At the 3km-long avenue, closed to the public since the renovation began last year, dozens of workers dig ditches, install pipes and move massive slabs of red granite.

Patel insisted the plan for the controversial renovation project stuck to the basics: lighting, parking, and bathrooms for visitors. Two buildings that currently house ministries will turn into museums.

During the conversation, the scorching heat of the afternoon gives away to sudden showers that completely drench the works. Patel used the opportunity to point out the lack of drains and slopes to prevent monsoon flooding.

The old buildings around the boulevard would be destroyed and replaced by new ministries, with the same model for all – including the prime minister’s residence and a triangular-shaped new parliament house in the front of the current building.

“The parliament building is in an awful state. It was built over almost 100 years ago,” Patel said the parliament house building was in a dilapidated condition.

“Over the years, it has been stressed. The courtyards are covered, the infrastructure inside is failing, it is a fire hazard, it is a security risk.”

He is considered prime minister Narendra Modi’s chief architect after heading his urban projects in his home state of Gujarat and the parliamentary constituency of Varanasi.

He said the new plan respected the original vision of British architect Edwin Lutyens, who designed the colonial New Delhi.

“However, there is all this anger, essentially because of miscommunication and lack of information,” he said, attributing it to the lack of communication by the government.

Architect and conservationist AG Krishna Menon is one of the many experts who have spoken out against the project, criticising it for the loss of public space.

“(Some) 100 acres of land have been converted from public, semi public to government use. So just to say that it is still public use is not right.

Specifically, the renovation requires the demolition of the National Museum and the Indira Gandhi National Centre for Arts.

The British had built the avenue to underline their imperial power. After independence, the public reclaimed the space.

“In other words, they are remaking history by making it imperial once again,” Menon insisted.

The abandoning of the current parliament – to be readapted as a museum whose details are unknown – has also raised eyebrows, even as the new building is expected to be ready before the 75th anniversary of India’s independence in August 2022.

He said the building where India’s constitution was drafted and that has been the lynchpin of the Indian democracy for over seven decades should be maintained in its current form and function as a symbol of the nation.

The opposition has also heavily criticised the redevelopment launched by Modi, especially over its massive cost.

“Central Vista is criminal wastage. Put people’s lives at the centre – not your blind arrogance to get a new house,” Rahul Gandhi, leader of the opposition Indian National Congress, said in a tweet in May.

The project especially came under fire during the second wave of the coronavirus outbreak when the sudden and massive rise in infections led to a collapse of the health system, including a lack of hospital beds and medical oxygen.

However, despite coronavirus, criticism, and weather changes, work continues unabated on the Rajpath and the new parliament, in sync with the project target for inauguration in August next year.