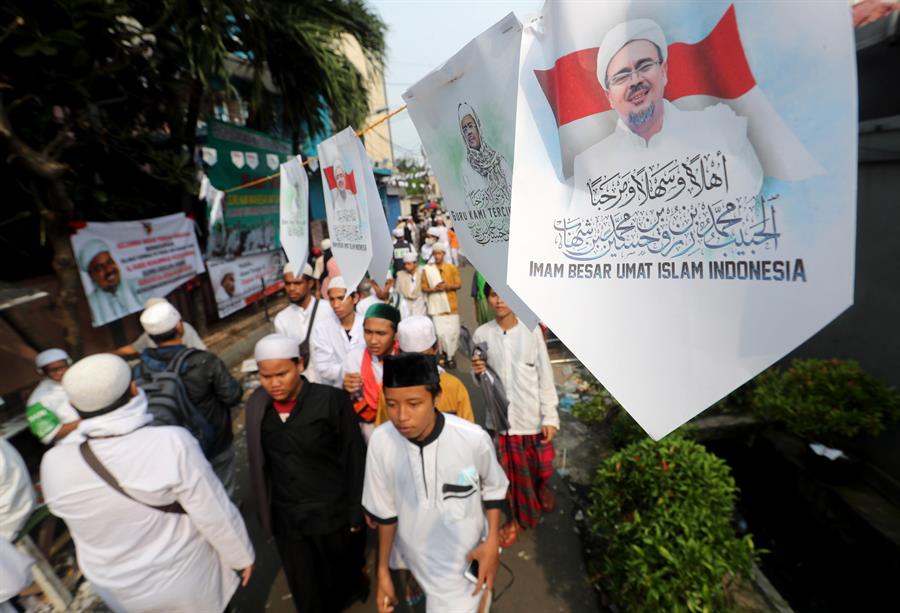 Indonesia today recorded 3,807 new cases of Covid-19 infection within the past 24 hours, bringing the total number of cases in the republic thus far to 474,455.

Concerns are now focused on a series of rallies related to the Islamic Defenders Front (FPI) leader Rizieq Shihab who returned to Indonesia from Saudi Arabia on Nov 10, as these are feared may trigger new Covid-19 clusters.

Thus far, the government has imposed a fine of 50 million rupiah (RM14,600) on Rizieq Shihab for failing to comply with Covid-19 health procedures when organising the wedding reception of his daughter Shafira Najwa Shihab on Saturday, which was attended by nearly 10,000 supporters.

Netizens, Indonesian media and community activists also expressed regret over the FPI leader’s supporters who gathered in several crowded gatherings – including a rally to welcome Rizieq Shihab at the Soekarno Hatta Airport on Nov 10, a FPI-organised Maulidur Rasul gathering in Jakarta, and a talk held at Megamendung, Bogor on Friday.

Rizieq, 55, returned to Indonesia after more than three years in Saudi Arabia. He was previously linked to several allegations of insulting Indonesian leaders (although there has been no prosecution in court thus far), and he was a strong supporter of Anies Baswedan during the 2017 Jakarta governor election.

Jakarta governor Anies Baswedan was also called by the Jakarta police to assist in the investigation because he was found to have been present in the Rizieq Shihab programme.

The continuous spike of Covid-19, in the republic has raised concerns among many following the series of rallies involving Rizieq Shihab, which were attended by tens of thousands of his supporters.

According to data posted on the official twitter page of the Indonesian National Disaster Management Agency @BNPB_Indonesia today, another 64,928 patients are still being monitored.

For the past 24 hours, from noon yesterday until noon today, another 97 deaths were reported, bringing the cumulative deaths in the republic now to 15,393 people.