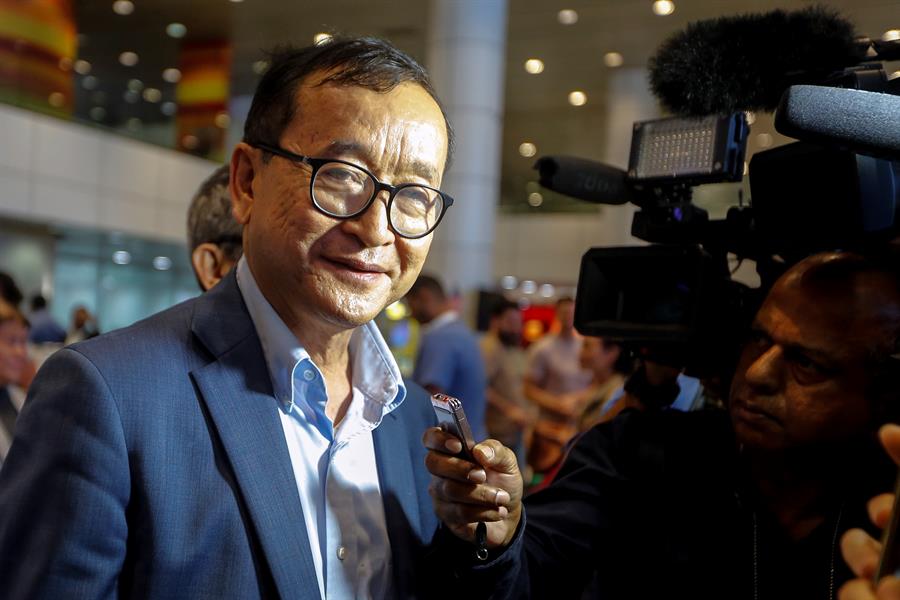 Cambodian authorities reinforced security along its border amid the possible return of an exiled opposition leader yesterday.

Leader of the opposition Cambodian National Rescue Party (CCHR) Sam Rainsy touched down at KL International Airport in the afternoon.

Immigration authorities questioned him before letting him into the country. Malaysian MP Nurul Izzah invited him to a meeting in Malaysian parliament on Tuesday, but it is not known if he has accepted.

Meanwhile rows of military personnel, barbed wire and security controls were deployed by the army and police at the Cambodian border with Thailand, a series of images published on social networks by the Cambodian Center for Human Rights (CCHR) showed.

“Security is tightening at the #Cambodia border with Thailand, in light of the announced return of former CNRP (Cambodian National Rescue Party) senior leaders on 9 Nov 2019,” CCHR said in a Twitter post.

Rainsy, who on Thursday was prevented from boarding a flight from Paris to Bangkok on the Thai national carrier – despite having a French passport – had said Friday night on Facebook that he was boarding a plane to another destination, without giving details.

The government of Cambodian prime minister Hun Sen, who has ruled since 1985, described the plan as a coup attempt and has pledged to prevent it by all means.

It has been given the cooperation of countries in the region such as Thailand and Malaysia.

Cambodia’s deputy prime minister Sar Kheng said on Facebook that Rainsy’s plans and opponents “have failed” in their plan and denied the opposition leader was not allowed to return.

“The Cambodian government does not prohibit Rainsy from returning to Cambodia, but he is guilty (of various crimes) and must face them upon his return,” Kheng said.

Rainsy has been living in exile since 2015 to avoid prison sentences, which he says are politically motivated.

Phnom Penh on Friday cancelled passports for 12 senior opposition leaders outside the country who had also announced their intention to return.

In recent days, Malaysia has prevented three Cambodians linked to the CNRP from travelling to Cambodia – including Mu Sochua, the party’s vice president, who has a US passport.

CNRP co-founder Kem Sokha was arrested for treason on 4 Sept 2017, which – similarly to Rainsy’s charges – is also widely seen as being politically motivated.

After a year in pre-trial detention, he was released on bail last September and placed under house arrest, where he remains.

Hun Sen, the world’s longest-serving prime minister, has ordered the arrest of opponents whom he calls “traitors.”

He tightened his grip on the country in 2017 after the Supreme Court dissolved the CNRP, considered the only real threat to the ruling Cambodian People’s Party ahead of the 2018 elections.

In a statement, NGO Human Rights Watch called on Cambodian authorities to allow the return of the opposition leaders and asked the nations of the region to allow them to travel.

“This is the culmination of three months of aggressive harassment, arrests, and attacks on the CNRP and its members, which is really about preventing the restoration of multi-party democracy in Cambodia,” HRW Asia director Brad Adams said in a statement.

“Sam Rainsy and other opposition leaders have the right under international law to return home and engage in peaceful political activities.”