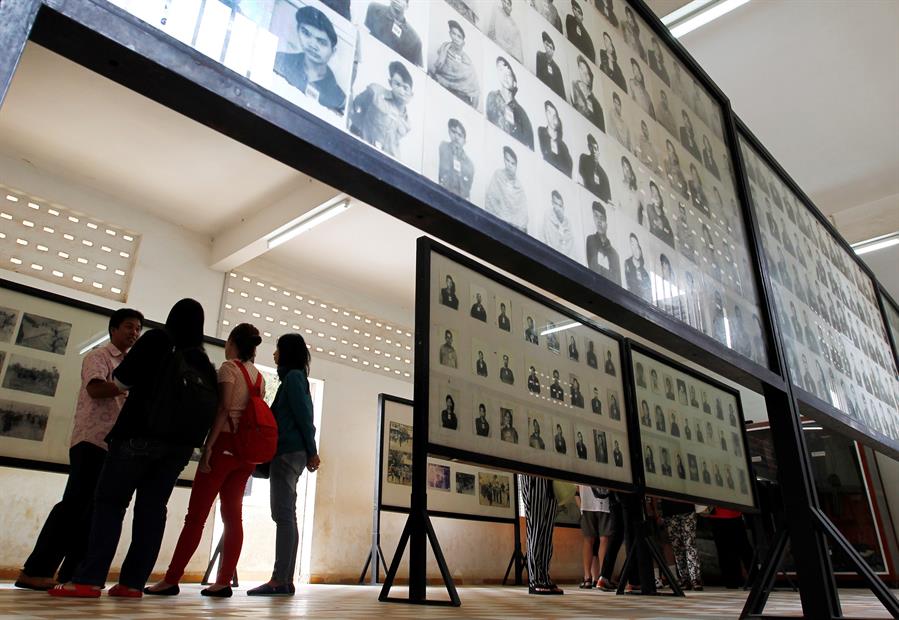 During its 1975-1979 reign, the Khmer Rouge took black-and-white photographs of people it detained at its notorious S-21 prison and interrogation centre – where at least 18,000 people were tortured and murdered.

Irish photo restoration artist Matt Loughrey was interviewed about his colourisation work by Vice, which published his altered photos – in which it appeared that not only had colour been added to the originals, but smiles to the faces of some victims.

Vice nor Loughrey made mention of the expressions being altered and the outlet did not show the originals.

However, when Vice’s reporter asked what he made of the smiles, Loughrey said “women tended to have a smile on their face more so than the men. I think a lot of that has to do with nervousness.”

Cambodia’s Ministry of Culture and Fine Arts said in a statement yesterday it “does not accept this kind of manipulation, and considers this work of Matt Loughrey to seriously affect the dignity of the victims, the reality of Cambodia’s history and in violation of the rights of the museum as the lawful owners and custodians of these photographs.”

The ministry said it had “never” been in communication with Loughrey, and asked Vice to take down the photographs, or else legal action would be taken.

Relatives of the victims and the general public in Cambodia, as well as internationally, also expressed their outrage, with some accusing the artist of falsifying history and Westernising the subjects’ faces, while others questioned the historical accuracy of the colourisation.

A woman, identified as Lydia and who claimed to be the niece of one of the people in Loughrey’s photos, said on Twitter that unlike some photos, her relative’s expression had not been altered, “but the article tells a false story about my uncle.”

The National Cambodian Heritage Museum and Killing Fields Memorial said in a Facebook post the alterations were “done without the consent of family members who lost loved ones in the prison, and with other Cambodian community organisations who are involved in this work.”

“Minimising the pain and trauma of our community from those who are not connected to the experience is not only revising and erasing history, it’s a violent act.”

An online petition was created asking Vice to remove the article from its website, which it appeared to do late Sunday.

Vice today acknowledged its “error,” blamed a “failure of the editorial process” and said it would “investigate” what happened.

“The article included photographs of Khmer Rouge victims that Loughrey manipulated beyond colourisation. The story did not meet the editorial standards of VICE and has been removed,” the outlet said in a statement.

The original photos are displayed at the former high school and prison, now the Tuol Sleng Genocide Museum, which educates on the period in which at least 1.7 million people – around a quarter of the population – died from execution, starvation and forced labor as the Khmer Rouge set out to establish an agrarian utopia.