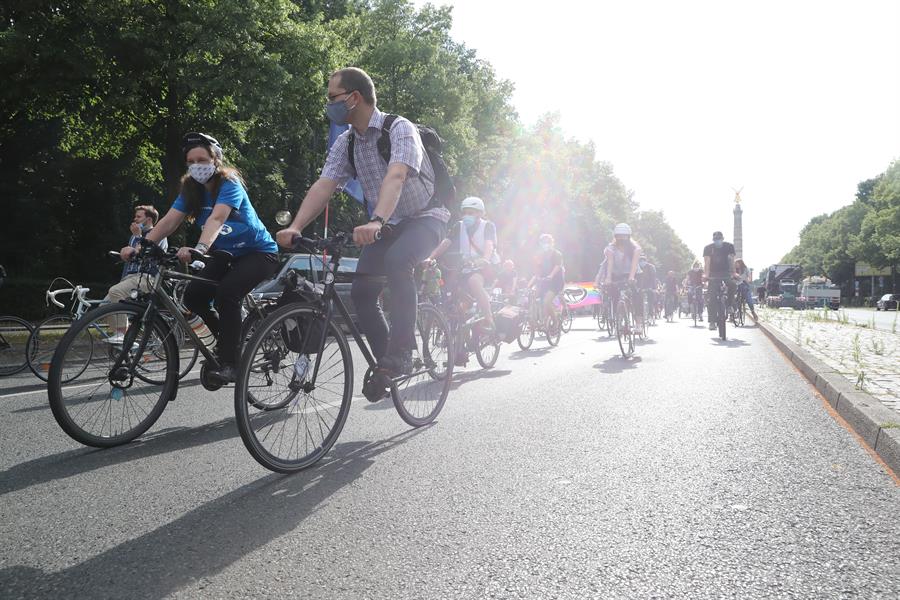 Local authorities and environmentalists are pushing for more designated bicycle zones in Berlin as an increasing number of residents in the German capital turn to the two-wheelers – despite efforts from the political right to slam the brakes on the initiative.

Generally flat and free of traffic jams, Berlin is already one of Europe’s most bike-friendly cities and offers some 650km of bicycle paths and lanes for those who prefer to commute or burn calories on two wheels.

“There has been a strong increase in (bicycle) users in recent months. It’s no myth, the figures are verifiable,” said René Filippek, from the German Cyclist’s Association (ADFC), the largest such affiliation in the country.

A year ago, there were around 1.8 million cyclists in Berlin, a city of 3.7 million – but that figure has since increased by 26.5% to 2.2 million, according to the local government.

Somewhere between a lobbying platform and activist group, the ADFC is advising Berlin authorities on the design of so-called pop-up bike lanes –  which are temporary and specifically tailored to accommodate the health and safety protocol required by the Covid-19 pandemic.

The local government has boosted the size of existing lanes on busy stretches of road so cyclists can maintain social distancing on their journey. The initiative has already extended the city’s bike lane network by 25km.

It has become the flagship project of local transport minister Regine Günther, who is working closely with ADFC. One of the most striking changes was to get rid of the traffic on Friedrichstrasse, a thoroughfare of the city’s Mitte district lined by luxury shops and terraces, by making it bicycle only.

“We set the path,” said Marion Tiemann, from Greenpeace. She has been involved in a project to create bicycle lanes in more than 30 cities without prior infrastructure.

“Our mission is to stop the pandemic from spreading to urban traffic, stop citizens from returning to the car because they’re worried about the virus in the metro or don’t like the vulnerability that comes with being on a bicycle.”

Greenpeace has been laying down its own bicycles lanes, often painted on the roads in the early hours of the morning. “It’s targeted action, as is usual for Greenpeace. We lay out the lanes for a day and we dismantle them again at night,” Tiemann says.

While Greenpeace offers inspiration in its action, other organisations – such as Changing Cities – lead campaigns to free up urban areas currently dominated by motorised vehicles.

“We’re a creative organisation, a platform in favour of ecological and healthy mobility,” Ragnhild Soerensen, a member of Changing Cities, explains.

The ADFC’s Berlin headquarters is in the government district of the German capital, next door to the ministry of labour and social affairs while Changing Cities has a more modest location in the modern neighbourhood of Prenzlauerberg.

“The pandemic reinforced our arguments,” Soerensen said in the association’s office as some of her colleagues reorganised their desks after three months of remote working.

But striking a balance between the interest of cyclists and pedestrians was a tricky issue even before the pandemic, with those travelling on foot complaining about the amount of bicycles mounting the sidewalks.

“If there are more bicycles out there, including those who ride on the sidewalks, of course it can lead to them becoming narrower. The idea to generate more space is not to become a detriment to pedestrians but to cars,” Soerensen says.

Even more complicated are relations between cyclists and car owners. Coming to the aid of the latter is the far-right Alternative for Germany (AfD) party, the third political force in the country – which has launched a legal case against the pop-up bike lanes.

The party’s representatives argue that bike lanes cannot be expanded unless it can be proven there is a real risk to cyclists. A Berlin court has already ruled in favour of the legal challenge on first hearing.

The department of transport appealed the decision. The local government and activists groups are confident the ruling will be overturned.

“I’m quite optimistic. I don’t believe the ruling will be upheld because that would have implications for the creation of bike lanes across Germany. It’s unthinkable, it would be a nightmare,” Soerensen says.

While the courts come up with a decision, Berliners can kill time by heading out to the 300ha site at the former Tempelhof airport, which has been out of use since 2008 and since converted into a space for cycling, trying out other non-moritised forms of transport or simply walking the dog.