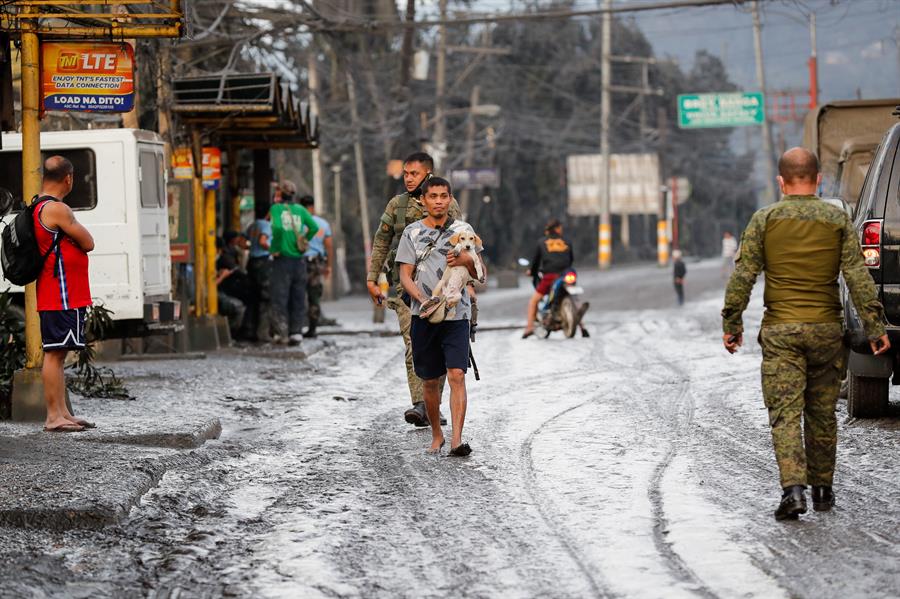 The activity of Taal volcano in the Philippines, which began spewing lava early today, has forced the evacuation of around 24,500 people in the surrounding municipalities while ashfall reached the capital Manila, located about 70km away.

The displaced were being held in 45 evacuation centres authorised by the authorities in the most affected municipalities — San Nicolas, Balete, Talisay, Lipa (Batangas province) and Tagaytay (Cavite), according to the National Disaster Risk Reduction and Management Council.

Regional civil defence spokesperson Lexie Masiglat said the evacuation protocol was still ongoing, meaning the number of evacuees was set to continue increasing over the next hours.

Of those evacuated, some 2,000 people are residents of the small volcanic island on Lake Taal which is starting to erupt; they mostly live on the volcano’s mountainsides.

The Philippine Institute of Volcanology and Seismology (PHIVOLCS) raised the threat level from 1 to 4 on a scale of 5 after an increase in activity within Taal’s crater resulted in the billowing of a huge plume of smoke that reached heights of around 1km.

It said new lateral vents had opened up and caused short 500m lava fountains to form, adding that long-term exposure to the ash cloud could be harmful and cause respiratory problems.

An alert level of 4 implies that a dangerous eruption could be imminent and that there is a risk of a volcanic tsunami, as Taal — one of the smallest volcanoes in the world — is located in the middle of the lake.

PHILVOCS director Renato Solidum said in a press conference the spewing of lava does not mean the volcano has necessarily entered the dangerous explosive eruption phase, though he did not reject that possibility, either.

In the last 24 hours, up to 75 earthquakes of volcanic origin have been recorded – 32 of them of noticeable intensity, including one of magnitude 3.8 during the early morning.

Ninoy Aquino International Airport in Manila and Clark International Airport (about 90km north of the capital), partially resumed operations after having been shut down due to lack of visibility – leading to the cancellation of at least 500 flights that left thousands of passengers stranded.

Educational institutions and government offices in Manila and Calabarzon region, where the provinces of Batangas and Cavite — most affected by the eruption — are located, have been suspended.

The areas surrounding the volcano have been covered by a thick layer of ash and toxic smoke, prompting the health department to recommend against going outdoors or using masks and glasses if doing so.

The department also discouraged people from driving, as visibility is limited and the ground has become slippery because of ash.

Teams from the Philippine Red Cross have moved to the area to assist in evacuation efforts, while the Philippine Armed Forces have been put on alert and sent five trucks to move evacuees.

Taal volcano is an island within the lake of the same name, located within a caldera formed by a previous eruption and is part of a volcanic chain that extends through the western region of the island of Luzon.