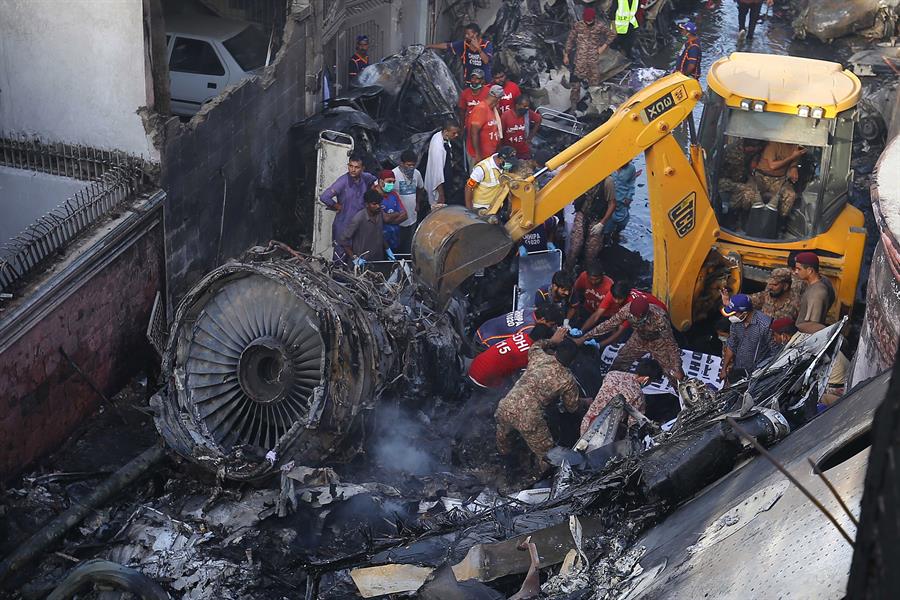 The death toll in a plane crash in Pakistan rose to 97 today after rescue teams spent the night searching for survivors among the rubble in a residential area in the port city of Karachi where the state-owned Pakistan International Airlines (PIA) flight with 99 people on board crashed a day earlier.

“There were 99 passengers and crew on board out of whom 97 dead bodies have been recovered and 2 passengers survived,” said spokesperson for the Karachi commissioner, Irfan Hussain.

Also, nine inhabitants of the crowded neighbuorhood of Model Colony area, where the aircraft crashed, sustained injuries – of which only two continue to be hospitalised, he added.

Of the 97 dead, 20 have been identified by family members while DNA tests will be carried out to identify the rest, said Hussain.

The Pakistani army confirmed the number of victims on its Twitter account and said the rescue operation was continuing at the plane crash site.

The aircraft crashed yesterday afternoon in an area very close to the airport of Pakistan’s biggest city and the main financial hub on the first day of the holiday marking the end of the Muslim holy month of Ramadan.

In the last conversation between the aircraft and the air traffic control tower shortly before the crash, the pilot warned that the plane had lost power from both its engines.

The Airbus A320, carrying 99 passengers and eight crew members, took off from the eastern city of Lahore and was about to land at Karachi’s Jinnah international airport when it went down.

Prime minister Imran Khan ordered an immediate inquiry into the crash as he tweeted “prayers and condolences” for the families of the deceased.

The country had resumed domestic flights recently after suspending air traffic due to the coronavirus crisis, which has left 52,411 people infected and 1,101 dead on Pakistani soil so far.

Pakistan experienced one of its worst air tragedies in 2010 when 152 people died in a plane crash near Islamabad.

In December 2016, a PIA flight carrying 48 passengers and crew had crashed on the way to Islamabad from Chitral in the north with no survivors.

One of the two survivors of yesterday’s crash recounted his experience of the accident, from which he escaped alive, amid fire and the screams of other passengers.

“The plane crashed. After that all I could see was fire. I could not see any people,” Mohamed Zubair told Pakistani television news channel Geo late yesterday from the hospital, where he is recovering from the accident “I could hear screams from all directions, screams of children, adults, elders and everyone’s.”

Zubair said that after the crash he took off his seat belt and headed towards the light he could see.

“I went towards the light and I succeeded. I had to jump down about 10 feet (3m) to get to safety and came out,” the survivor explained.

Zubair said when they neared Karachi the pilot announced they would be landing – but that he aborted the operation and then tried again 10 or 15 minutes later, unsuccessfully.

“He (Zubair) has burns on 31% of the body. At the moment, he is doing fine but there may be some complications later,” Munir Sadiq, of the Civil Hospital Karachi, where Zubair is admitted, said today.

The other passenger to survive the crash is Bank of Punjab president Zafar Masood.