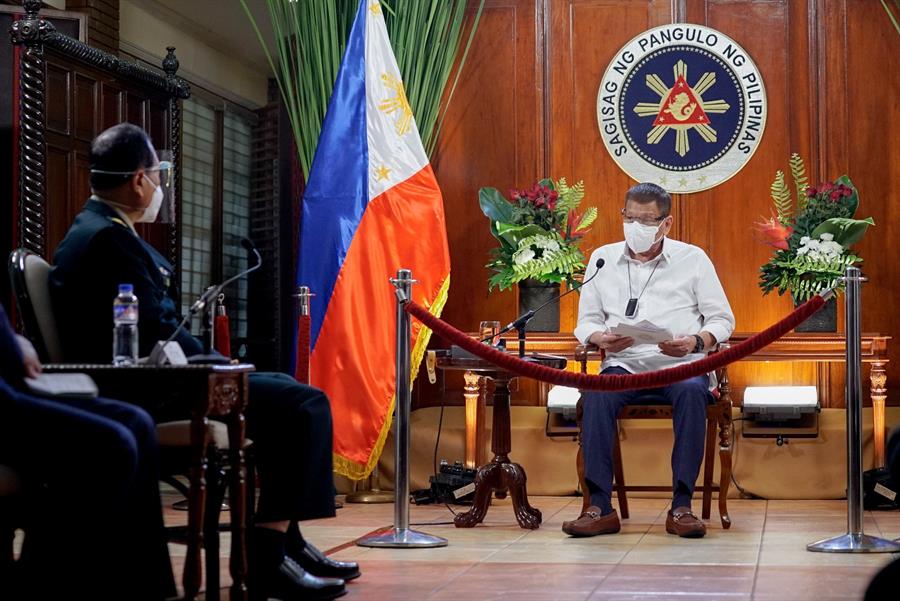 Manila reached six uninterrupted months of quarantine today and is heading toward the world’s longest and strictest lockdown – with no end in sight – while efforts to contain the pandemic continue to fail in the Philippines, the centre of Covid-19 in Southeast Asia.

The Philippine capital has more than 144,000 cases, more than half of the country’s total (54%), indicating the harsh confinement has not yielded the expected results in one of the most densely populated cities in the world.

The Philippines has so far confirmed 265,888 cases of Covid-19, of which 58,754 are still active and 4,630 fatalities – the highest in the region, where almost all neighbouring countries, except Indonesia, have contained the pandemic and recovered to some extent.

“The epidemic continues to spread, it is not controlled, and the curve continues to rise after six months, with a daily average of 3,000 or 4,000 new cases, the majority in Manila,” noted former Philippine secretary Manuel Dayrit, who successfully managed the SARS crisis in 2003, in a forum with the foreign press.

The capital – with almost 14 million inhabitants – was closed by land, sea and air on March 15 and will remain so at least until Sept 30, a total of at least 6½ months, a period in which trips to and from Manila are prohibited except for emergencies.

The quarantine in Manila will be the longest in the world for now.

The first cases of Covid-19 arrived in the Philippines in late January, imported by Chinese tourists, but community transmissions were confirmed in early March and president Rodrigo Duterte – who initially downplayed the impact of the virus – declared a national emergency on March 9, two days before the World Health Organisation (WHO) declared the pandemic.

Manila, and almost the entire country, was in strict confinement for three consecutive months – during which the capital became a ghost town, without traffic and with all businesses closed; a situation to which it returned for 15 days in August to stop a new peak of infections that saturated hospitals.

“More tests must be carried out and be more effective in contact tracing and in isolation rules to contain the spread. And then localised closures must be correctly implemented,” said professor Guido David, from the centre for data analysis at the University of the Philippines.

The Philippines has tested only 2.9 million people – about 2.5% of the country’s nearly 109 million inhabitants – which makes it difficult to locate new outbreaks of the disease, which has a high percentage of asymptomatic patients, which further complicates the identification of cases.

However, David admitted that “closures and strict lockdowns are not a long-term solution” because it is “economically devastating for a developing country like the Philippines”. So he advocated imposing selective, small-scale quarantines to contain outbreaks.

“I do not think it is effective to surround entire cities or regions. It is only necessary to close particular areas, but making sure that good health practices are followed, such as wearing masks, washing hands regularly and correctly isolating suspected cases,” said Esperanza Cabral, who was also Minister of Health between 2009 and 2010.

Since Aug 15, Manila has experienced an intermediate phase of confinement, which still restricts the movement of people – those under 21 and over 60 cannot leave their homes – but it has allowed the reopening of more businesses to reactivate the economy. During the first months, only pharmacies, markets and public transport were partially operative.

However, a multitude of shops and restaurants in the capital have already shut, unable to weather the loss of customers caused by the long confinement; while entertainment venues such as parks, museums or cultural centers remain closed.

The pandemic has wreaked havoc on the Philippine economy – which entered recession for the first time in 30 years, plummeting 16.5% in the second quarter, largely due to the strict closure of the capital and neighbouring provinces, which account for almost 70% of the national GDP.

In addition to sinking tourism, a growing sector in the country that reached 11% of GDP last year, the pandemic has paralysed the construction of infrastructure and the service sector, engines of the Philippine economy.

According to a recent survey, 45% of the Philippine workforce is unemployed due to the pandemic in a country where 16.6% of the population lives below the poverty line – affecting above all the thousands who live in the informal economy. These include tricycle riders or street vendors, who have been left without savings and starved by the pandemic.

“We advocate for a total reopening of the economy as soon as possible, although with discipline and precautionary sanitary measures, because we have already lost too much employment” said Isko Moreno, mayor of Manila, one of the 17 cities that make up the metropolitan area of the capital.

The curfew is still in place in the capital, although since mid-August its start has been delayed to 10pm – before it was at 8pm – until 5am, and many neighbourhoods have decreed an alcohol ban to avoid night meetings to drink.

Meanwhile, the president said he will prioritise Covid-19 vaccines developed by Russia or China, his geopolitical allies, instead of those made by western pharmaceutical companies – which he accused of looking for profit amid the pandemic.

“If the vaccine of Russia and China are equally good and effective just as any other vaccine by any country, I will buy (them) first,” Duterte said in a televised speech last night – in which he offered his collaboration to Russian and Chinese companies developing a vaccine.

The president explained he prefers to work with China or Russia because of their “generosity” towards the Philippines at the beginning of the pandemic, when uncertainty reigned.

“We were drifting, then this storm came. No other country helped us,” said Duterte, who has received donations of medicines, masks and protective equipment from both countries – but also from other nations as well as generous financial aid from the World Bank and the Asian Development Bank.

The president criticised that many Western companies “want cash advance” to guarantee the supply of the vaccine, although none have yet been approved – whereas with China or Russia, they don’t need to “beg or plead.”

“One thing wrong with Western countries, it’s all profit, profit, profit. There’s a pandemic, and you say, ‘We have something for sale. Or something to sell to you’,” noted Duterte, who took a more strong stance against the US and the EU when these countries criticised human rights abuses in the war on drugs campaign launched by the president.

“There is nothing with finality and you want us to make a reservation by depositing money. You must be crazy. If (those) companies or their representatives are here and if I happened to have dinner outside and see you somewhere, I’ll kick your ass,” Duterte said, visibly angry.

The Philippines is in talks with Russia to start clinical trials of the Sputnik V vaccine in October; although it is also negotiating with China to acquire the vaccines from the Sinovac and Sinopharm companies.

The Russian candidate for the coronavirus vaccine has shown encouraging results in two small-scale trials, according to the prestigious British medical journal The Lancet. However, it has yet to undergo large-scale testing, in what would be phase 3 of the clinical trial to evaluate their safety and effectiveness.

Manila and Moscow are finalising the procedures to start part of phase 3 in the Philippines in October, and even to mass-produce Sputnik V in the Asian country.

To reaffirm his confidence in the Russian vaccine, Duterte even pledged in August to be the first Filipino to publicly get the vaccine and thanked Putin for this “great contribution to humanity.”

Meanwhile, Indonesia recorded 3,507 new positive Covid-19 cases in the past 24 hours to bring the overall total positive cases in the republic to 225,030.

Based on the data published in the official Indonesian government website on Covid-19 today, there are 99,634 more patients being monitored for the virus.

The Province of Jakarta which came under the Large-Scale Social Restrictions (PSBB) again for two weeks starting yesterday, reported 1,076 new cases, to bring its total to 56,175, the highest in the republic.