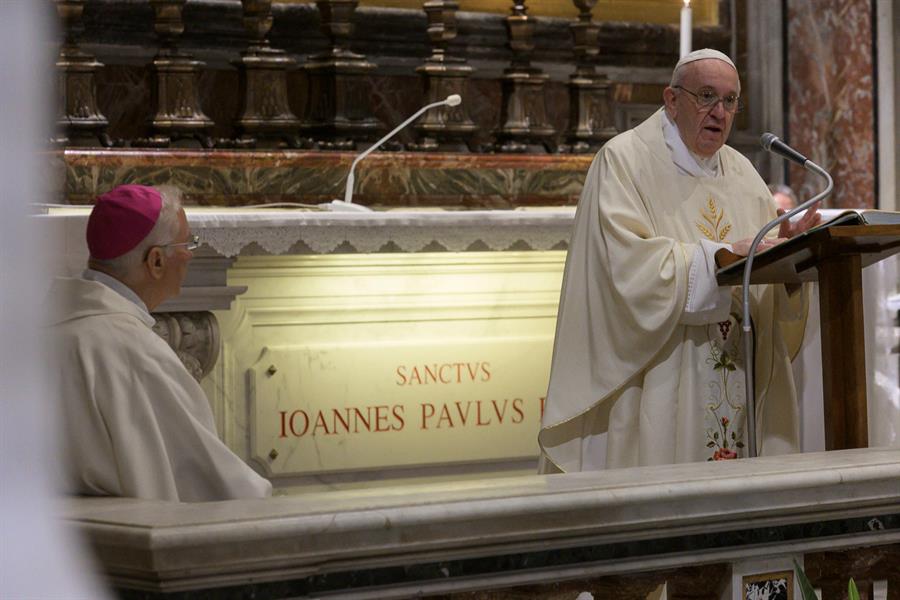 Pope Francis yesterday held a mass in the presence of worshippers for the first time in over two months, as the coronavirus pandemic had forced Italy and the Vatican into lockdown.

The service marked the centenary year of the birth of Pope John Paul II and took place in St Peter’s Basilica, which opened its doors to visitors later in the day for the first time since March 10 – when Italy ordered the closure of businesses and landmarks, rules the Vatican also adopted.

From yesterday, Italy has permitted religious gatherings – so long as they are held in accordance with strict health and safety protocol in place as the country tentatively transitions out of its lockdown.

Around 30 people attended the mass at the chapel of John Paul II, some of whom did not wear gloves or masks, which is obligatory in Italian churches and cathedrals.

There was also a small choir of nuns, who had to observe social-distancing protocol. Choirs are prohibited for the time being across the city-state border in Italy.

Yesterday’s morning mass was also the last one due to be livestreamed.

The Swiss Guard were on duty to ensure visitors to St Peter’s Basilica were complying with the health and safety protocol in place.

Lines to access the landmark began to form early in the morning. Visitors were not allowed to enter the square and their temperatures were registered before they went into the building.

In his homage to the late Polish pope, Francis told those present and viewers “Pope Saint John Paul II was a man of God because he prayed and prayed a lot despite the arduous work of trying to guide the Church.”

“He knew well that the first task of the bishop is to pray. He was not separated from the people,” the pop said, adding that he travelled the world to find them and get close to them.

The Argentine pontiff said Karol Józef Wojtyła, who died in April 2005, was a man who wanted “justice, social justice, justice for the people.”

The government in Italy, where the virus first took hold in Europe, agreed over the weekend the majority of businesses in the country could reopen this week and that decision-making on the pace of the de-escalation would be handed to regional leaders.

It meant that 70% of bars, restaurants and hair salons opened their doors again after two months of stagnation, as the government sought to quell what was the deadliest coronavirus outbreak in Europe.

Some businesses decided against opening up in case business was too slow, while others did not have the necessary health and safety requirements in place.

“Italy is examining how to return to normality, but there are fears: fears of infections, fears that people won’t spend money, of facing this situation with a lower intake, fears that companies will not recuperate their losses,” said Italian economist Stefano Manzochi.

According to Confcommercio, the lockdown ordered by the Italian government sent consumption in the country plummeting by 30.1% in March and 47.6% in April, compared to the same period last year.

As well as reopening businesses and commercial spaces, Italians will be allowed to travel freely within their regions and beaches can also welcome visitors once again, although sunbathers will have to maintain one metre of social-distance.

The government plans to open gyms, sport centres and swimming pools from May 25 and then cinemas and theatres from mid-June.

Further, around 32 million people in Spain, roughly 70% of the country’s population, awoke to eased coronavirus lockdown restrictions yesterday as two of Europe’s worst-affected nations attempt to get their economies back on their feet.

The majority of Spain has progressed into phase one of the government’s so-called “transition to a new normality”, although Madrid, Barcelona — the two worst-affected regions — and a patchwork of provinces in Castile and Leon remain in the preliminary phase zero.

The government of prime minister Pedro Sánchez slightly eased the rules of phase zero, which remains in effect for a third of the population, allowing businesses smaller than 400 sqm to offer services without customers requiring a reservation. Museums can also partially reopen at limited capacity.

The slight easing of restrictions comes after the entire nation spent almost two months in one of the most draconian lockdowns in the world, as people were only allowed to leave their houses for essentials such as food and medicine.

Periods of outdoors exercise have only been permitted since the beginning of May and must be carried out in accordance with strict protocol.

Those living in areas that have moved to phase one of the easing of the lockdown, in force since March 14, can meet with friends and family in groups of up to 10 and can dine and have drinks in outdoor restaurant spaces, which can open at one third their normal capacity.

A number of small Spanish islands, with a total population of 45,000, have progressed to phase two of the four-stage de-escalation process.

José Luis Ábalos, the transport minister, yesterday said he was confident tourism in Spain – one of the pillars of the country’s economy – could restart at the end of June, by which time the government hopes to have lifted all travel restrictions in the nation.

He said any move to kickstart the industry would depend on the success of the de-escalation plan. Last year, Spain was the second-most visited country in the world with a total of 83.7 million tourists choosing it as a destination. Almost 2.5 million jobs revolved around the industry.

Measures are being eased after Spain’s daily death toll dipped below 100 — to 87 — on Sunday for the first time in two months. Health authorities yesterday said just 59 people had died in the last 24 hours.

The asymmetric nature of the de-escalation process in Spain has sparked tensions between the central and regional governments.

The Socialist Party-led coalition government is also likely to come up against tough opposition to its bid to extend the state of alarm, which grants it powers to restrict the movement of people, by another month for what the PM said would be the final time.