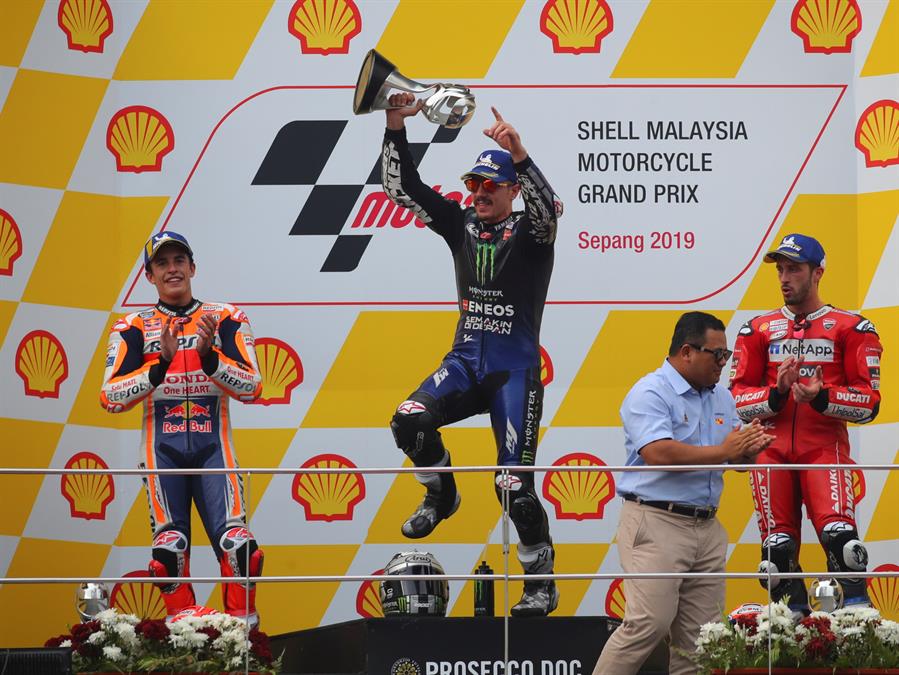 Maverick Viñales (Yamaha YZR M 1) secured his second victory of the season at the Malaysian Grand Prix of MotoGP.

The competition was held at the Sepang circuit, where Marc Márquez (Repsol Honda RC 213 V) achieved his goal of finishing all the races of the season on the podium, despite having been 11th in training.

Third place on the podium was a contest between two Italian drivers – Andrea Dovizioso (Ducati Desmosedici GP19) and Valentino Rossi (Yamaha YZR M 1) – which ended in favour of the former.

Frenchman Fabio Quartararo (Yamaha YZR M 1), who obtained pole in training, had to settle for seventh place, after a bad start and a race in which he did not obtain any position.

Australian Jack Miller (Ducati Desmosedici GP19) was the fastest in a start in the fall Quartararo and Spaniard Márquez reached the end of straight eighth and on the inside of the curve advanced two positions to sixth and in the second fifth curve.

Before concluding the first round, Márquez was already second behind fellow Spaniard Viñales – the initial leader of the competition – although Miller returned to overtake at the end of the straight.

Viñales scored the first fast lap in the second turn, ahead of Miller and Marquez, with an Italian trio behind them, Dovizioso, Rossi and Franco Morbidelli (Yamaha YZR M 1) and with Alex Rins (Suzuki GSX RR), seventh ahead of an unrecognizable Quartararo who failed to get a good career pace.

A turn after the fast lap was for Rossi, fifth, although the only one who had obtained a few metres of advantage by then was Viñales.

In the third round Márquez beat Miller, who tried unsuccessfully to avoid it, and Repsol Honda began hunting for a Viñales who by then had a second and a half advantage over the rest.

Miller had to defend himself in fourth place from an incisive Rossi, who had a line with both Rins, Morbidelli and Quartararo, who closed the lead group, with his compatriot Johann Zarco (Honda RC 213 V) in ninth position.

Although Marquez tried to close the difference with Viñales in the seventh and eighth lap but the Yamaha rider knew how to endure the distances and even increase it in the 10th turn.

Since the positions of both were consolidated, with Viñales first, Márquez comfortable in second and, from there, a couple of pairs, Dovizioso-Rossi and Rins-Morbidelli, fighting for the best position of each.

Quartararo, who had been the fastest in training, tried to recover positions from the eighth place he had come to occupy and Rins was approaching the Italian couple.

Spaniard Joan Mir (Suzuki GSX RR) struggled to overcome from very late positions and on the way to eighth he competed with the Frenchman Johann Zarco (Honda RC 213 V), who ended up on the ground.

Mir fell from eighth to 10th position, which he finally held, while no one could snatch the victory from Viñales.

He was ahead of Márquez and Dovizioso, with Rins in fifth, Pol Espargaró (KTM RC 16 ), 11th, his brother Aleix Espargaró (Aprilia RS-GP), 13th and Jorge Lorenzo (Repsol Honda RC 213 V), in 14th place.