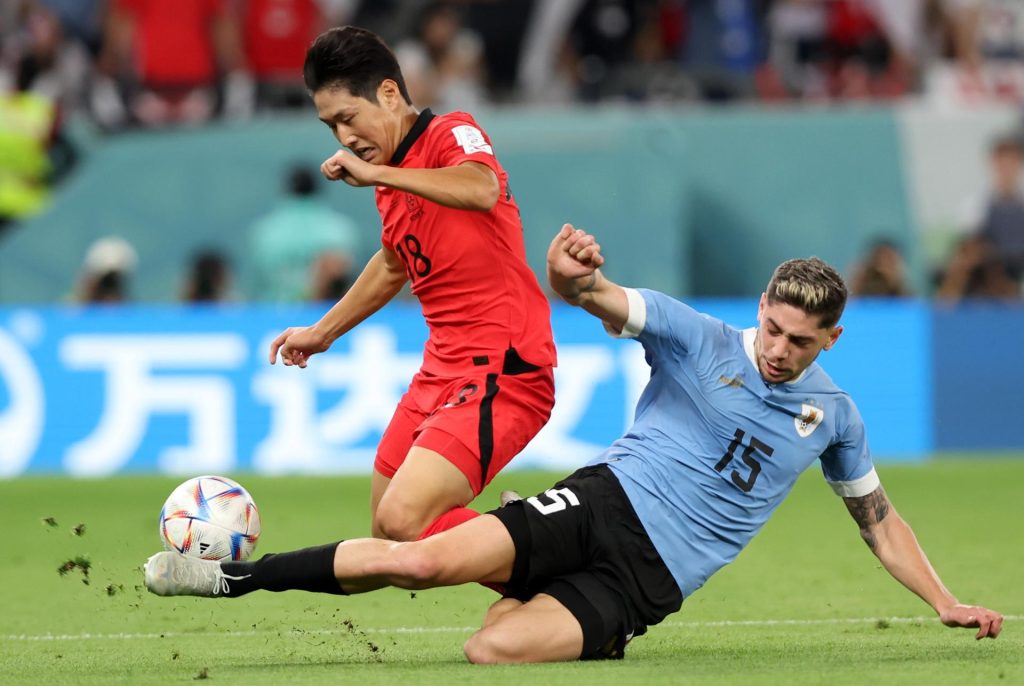 Uruguay and South Korea were evenly matched in an entertaining 0-0 draw in their Group H match yesterday at the Education City Stadium in Doha.

Uruguay went closest through Ernesto Valverde, who smashed a long range strike against the upright as the game wound down.

South Korea’s star Son Heung-min, who hadn’t played since sustaining a facial injury for Tottenham Hotspur earlier this month, could not inspire his side against a tough, experienced Uruguay team featuring the likes of Luis Suarez, Edinson Cavani and Liverpool’s new forward Darwin Nuñez.

While neither team managed to break the deadlock, it wasn’t for lack of trying or creativity, with both teams contributing to an open, attacking match – although South Korea, who had the better of the first half, looked less threatening in attack than the South Americans.

Portugal’s Cristiano Ronaldo converted a penalty against Ghana here to become the first player to score in five World Cup tournaments and his team prevailed 3-2 to vault to the top of Group H.

Both Portugal and Ghana came into the match at Doha’s Stadium 874 looking to snap a string of disappointing results in World Cup openers and the first half was less than scintillating.

The 37-year-old Ronaldo forced a save from Lawrence Ati-Zigi in the 10th minute and beat the Black Stars keeper just after the half-hour only to see the goal disallowed because of a foul by the attackers.

The match clock passed the hour mark with no goals, but an encounter between Ronaldo and Mohammed Salisu in the Ghanaian area in the 62nd minute led to a controversial penalty for Portugal.

The five-time Ballon d’Or converted with authority to put Portugal up 1-0 in the 65th and set yet another record. Yet the lead lasted only eight minutes, as Andre Ayew equalised for Ghana.

Portugal reclaimed the advantage in the 78th minute on a goal by Joao Felix, assisted by Bruno Fernandes, and late sub Rafael Leao made it 3-1 for the Iberian side two minutes later.

The Black Stars were not ready to give up and Osman Bukari narrowed the deficit with a goal in the 89th minute and nearly stole a point in the 10th minute of stoppage time when Portugal keeper Diogo Costa inexplicably dropped the ball with Ghana’s Iñaki Williams lurking in the box.

Switzerland pinched a 1-0 victory against Cameroon in the Group G opener with an early second-half goal coming from Cameroon-born Breel Embolo.

Embolo broke the deadlock in minute 48, slotting in a Xherdan Shaqiri cutback to put the Swiss in front.

The 25-year-old Monaco forward declined to celebrate the strike, holding up his hands out of respect for his country of birth.

Brazil got their World Cup 2022 campaign off to a great start Thursday, defeating Serbia 2-0 on a pair of goals by Richarlison.

The Canarinha, who are chasing a record-extending sixth World Cup title, lead Group G by virtue of better goal difference than Switzerland, who beat Cameroon 1-0 earlier in the day.

The only negative for Brazil – and for the tens of thousands of Brazil fans who packed Doha’s Lusail Stadium – was seeing Neymar leave the pitch in pain in the 79th minute.

Team physician Rodrigo Lemar said after the match that the Paris Saint-Germain star and Brazil captain suffered a sprained ankle and that it will be at least 24 hours before the medical staff can determine the extent of the injury.

But the prospect of being without Neymar for the rest of the group stage will be less worrisome following Richarlison’s spectacular performance.

The 25-year-old Tottenham Hotspur forward has scored nine times in seven appearances for Brazil this year and his overhead strike to make it 2-0 Thursday is a strong contender for the best goal of the first 32 matches in Qatar.

Though Serbia have a proven striker in Alexander Mitrovic and a talented playmaker in Dusan Tadic, their approach to the clash with high-scoring Brazil was emphatically defensive and the Balkan side failed to put a single shot on target.

And those tactics, combined with seven saves by Vanja Milinkovic-Savic, held the Brazilians at bay until the 62nd minute, when the Serbian keeper stopped an effort by Vinicius Jr. only to watch helplessly as Richarlison scored off the rebound.

Eleven minutes later, a pass from Vini found him in the area and Richarlison produced a spectacular bicycle kick to nail down the 3 points for Brazil.