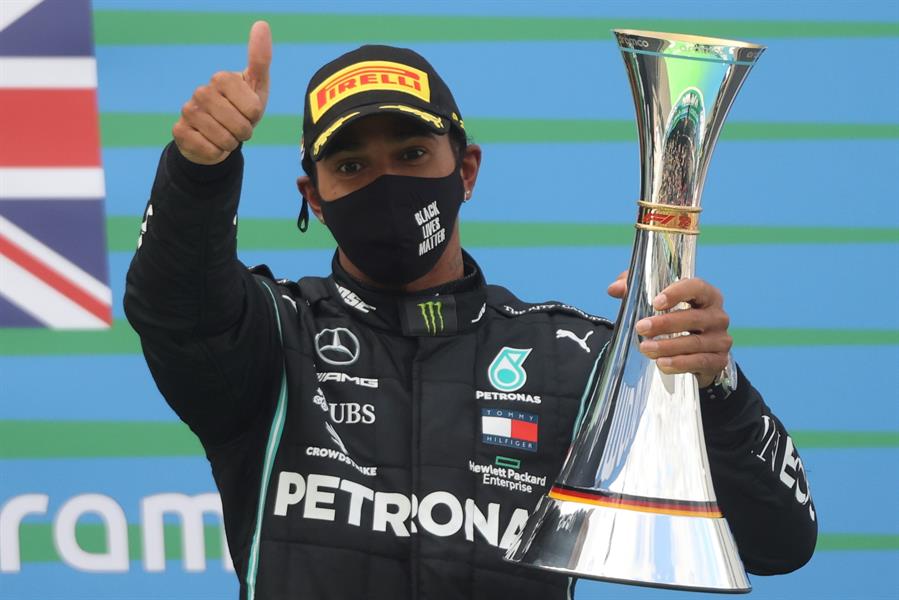 In Formula One racing, the Mercedes driver took his seventh win of the season to extend his lead at the top of the drivers’ championship on a historic day for him and the sport. Schumacher’s record – once widely considered unassailable – had stood for 19 years.

With Hamilton needing just one more win to own the record outright, his status as Formula One’s greatest ever driver is all-but guaranteed. The Briton is also odds on to match Schumacher’s record of seven world championship titles.

Schumacher’s son, Mick, presented Hamilton one of his father’s helmets on the podium to mark the moment.

“I’m honoured,” Hamilton said. “When you grow up watching someone and idolise them … I don’t think anyone – especially me – thought I would be anywhere close to Michael in terms of records. I couldn’t have done it without this team. Huge respect to Michael.”

Valtteri Bottas, who started on pole, locked up on lap 13, leaving a wide open gap for his teammate and rival Lewis Hamilton to take the lead.

A safety car soon afterwards was the last thing the Finn needed as it handed Hamilton and Max Verstappen free pitstops.

Bottas’ day then got even worse as a mechanical failure meant he was forced to retire from the race on lap 20, with only a third of the race run.

It had been a positive start for Bottas, who briefly lost the lead to Hamilton on the first lap before fighting back.

Hamilton had opened up a multi-second lead over Verstappen by lap 25, and remained clear of any incidents to steer a clear path to his historic victory.

“It was not an easy race at all,” Hamilton said. “The Red Bulls are so fast. Max drove extremely well. We’ve got a serious fight on our hands.”

Runnerup Verstappen, who won fastest lap, continued his record of finishing on the podium in every race he has completed, one place ahead of Daniel Ricciardo, who delivered Renault’s first podium since they returned to the sport in 2016.

Racing Point’s Sergio Perez placed in fourth after an impressive drive in which he pushed Ricciardo all the way, while McLaren’s Carlos Sainz followed in fifth. 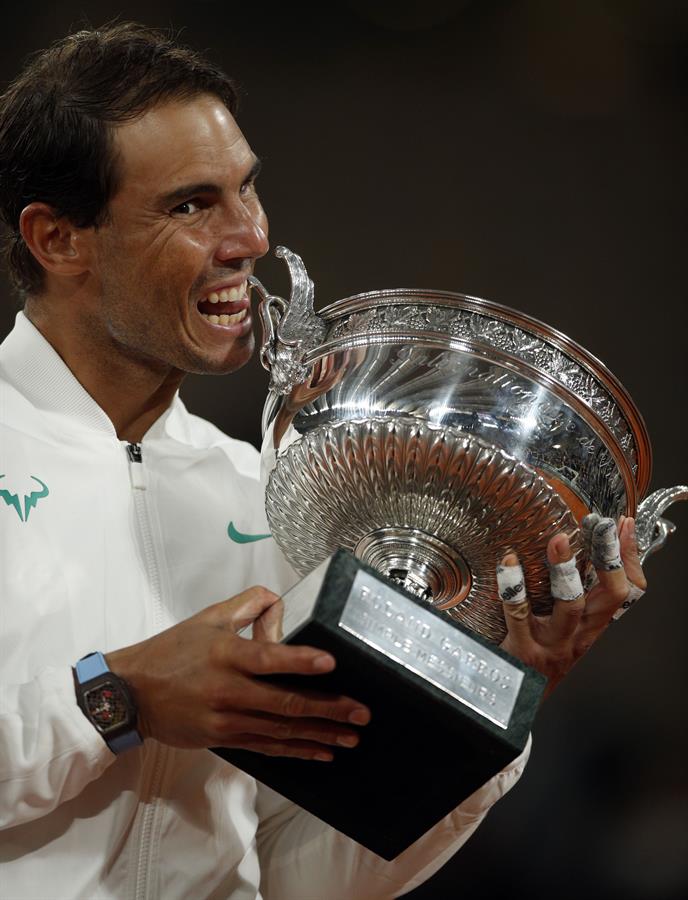 In tennis, it was a much simpler final round than expected for Nadal – going up against the world No 1 player – and with the win, he also secured his 100th triumph on the court in Paris.

At age 34, the Spaniard won the Roland Garros, which had been postponed into the autumn due to the coronavirus pandemic, with cold and humid conditions in the French capital. But even so, he managed to hold his dominant position within a tournament of which he quickly took ownership.

Nobody in history has ever won the same tourney 13 times, although Martina Navratilova won the Chicago contest 12 times.

Nadal becomes the fifth player in tennis history to exceed 100 victories in a major tournament, but he did so without the customary crowd in the stands due to pandemic gathering restrictions.

The Spaniard, who arrived in Paris having played just three games after the quarantine, showed at Roland Garros he is still growing and handed Djokovic only his second defeat of the season – after he was disqualified from the US Open while playing countryman Pablo Carreño after he hit a ball in frustration but it struck a line judge in the neck, a disqualifying action.

Half an hour before the start of the match, an autumn rain was falling, making the Philippe Chatrier court unplayable, so the contest was moved indoors, just like the 2012 Australian Open.

Djokovic’s muscles seemed to be rather stiff during the match and he did not show his customary liveliness, and – more importantly – his attempts to find a niche to exploit in the Spaniard’s wall largely came to nought.

Although Djokovic’s serve – one of his most powerful weapons – wasn’t fully online for the match. Combined with the fact that he didn’t manage to break Nadal’s service until a half hour had elapsed, and then wasn’t able to capitalise on, it was also another factor weighing on the Serb’s game and he lost the first set 6-0.

Although he improved his first-serve percentage and won a couple of games in the second set, Djokovic still wasn’t totally with it during the outing and Nadal’s reading of the net game was far better than his rival’s.

In the third set, Djokovic managed to pocket five games, but it still wasn’t enough to send the match into a fourth, and later perhaps a fifth, set. On the way, the Serb continued to make errors and never really managed to dismantle Nadal’s defence.