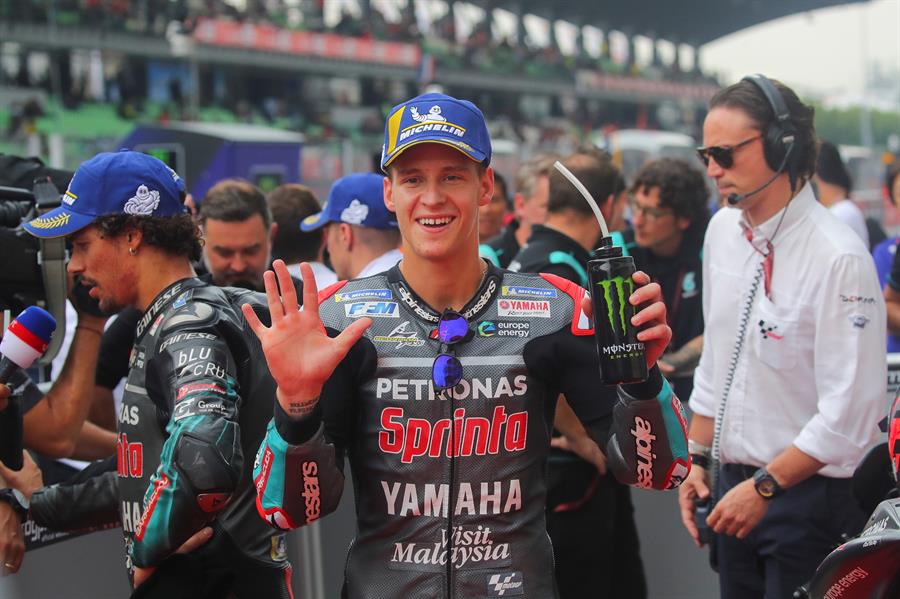 He and Marc Márquez (Repsol Honda RC 213 V) were locked in a close battle for much of the session, with the Spaniard staying close in his slipstream.

Márquez succumbed to the superiority of his rival and reaped the worst training result of his sports career in MotoGP.

The Malaysian track has not been particularly good for him in recent years, after second position in 2015 it has gone from bad to worse, fourth in 2016, seventh in 2017 and 2018.

This year he has not been able to move from 11th place and suffered a dramatic crash today.

The Repsol Honda rider was in a spectacular high-side on his way into Turn 2 while trying to follow his French rival.

Although somewhat stunned, the MotoGP world champion was back on his feet after the smash and was able to hesitantly walk away.

His opponents achieved Yamaha’s first triple in the front line, with the best time for Quartararo, ahead of Maverick Viñales and Franco Morbidelli, all of them below the previous record, which was set by Spaniard Daniel Pedrosa (Repsol Honda RC 213 V) at 1: 59.053 in 2015.

The only rider who missed out on the Yamaha success story was Italian Valentino Rossi, who had to settle for sixth place.

The first Suzuki rider in the classification was Spaniard Alex Rins in seventh position, with the first Aprilia in the hands of Aliexpress Espargaró, 14th, and the first KTM with Pol Espargaró at 15th.

Meanwhile, Petronas Sprinta Racing Team (SRT) rider Adam Norrodin’s spirit is not dampened though he has to start the race from the bottom grid – as he is eyeing a top 20 finish in tomorrow’s race.

The 21-year-old rider, who has replaced Khairul Idham Pawi in Moto2 since the San Marino Grand Prix, believes that in motorcycle racing nothing is impossible to be achieved.

“The time gap between me and the front runner wasn’t too far so it gives me hope to seize the opportunity to catch them. I can still try to get better results.

“However, we (as a team) have to plan our strategies or improvements needed to better our performance. In terms of bike balancing, today’s race (the qualifying and free practice 3) has shown some improvement compared to yesterday,” he told the media at Sepang Circuit.

In today’s qualifying session, Adam, who will return to compete in the Youth Championship in Spain (CEV) next season, recorded his fastest lap time of two minutes 07.851 seconds.

Adam admitted he was a bit disappointed with the qualifying today due to a tyre problem.

“Actually from yesterday (in free practice 2) we had a problem with the tyres and the problem gave me a bit of a hindrance to my progress.

“So now we’re going to look into certain issues that can be improved for tomorrow’s race,” said Adam, adding that there is still much to learn in order to be a good rider.

Adam replaced Khairul Idham, who had to be rested for a longer period after undergoing right-hand surgery in Spain last August, following an injury he sustained at the Spanish GP in May.

The 18-round Moto2 race at the Malaysia Motorcycle Grand Prix will start at 12.30pm tomorrow.

The country’s MotoGP rider, Hafizh Syahrin Abdullah of the Red Bull KTM Tech 3, would also start his race from the last grid after posting his best lap time of 2:01.045s in the qualifying.

Hafizh Syahrin, who is known as El Pescao, said he was disappointed with the KTM RC16 machine as he couldn’t achieve better results.

“I know that I could not do much with my bike. I have done my best to improve my timing compared to yesterday’s practice session.

“Of course I know my machine is not capable of much change but for now, I just want to do my best for my fans. I do not want to put high expectations but anything can happen tomorrow.”