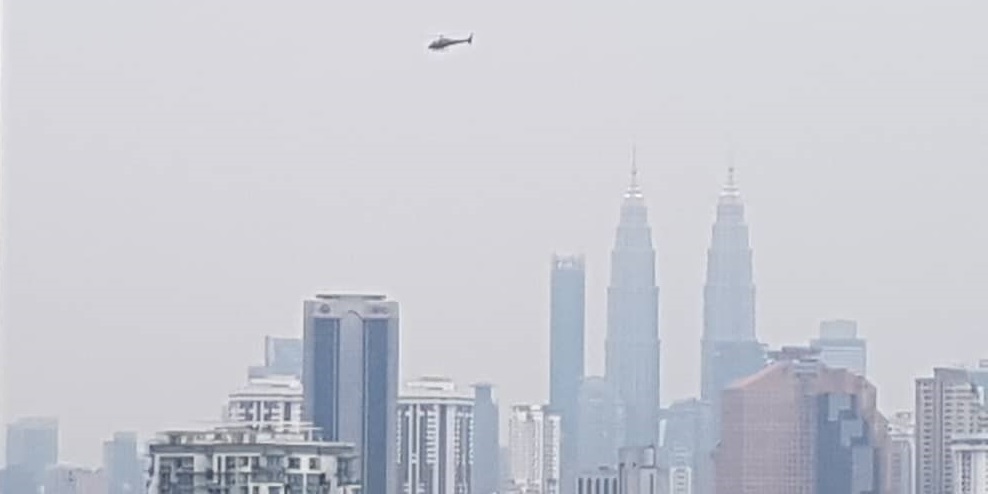 The view from Wisma Bernama found the tallest structures in the country, KL Tower and Petronas Twin Towers – located about 3km and 6km away – were not visible at all.

The observation also found the air quality and visibility at noon were limited compared to the morning as the haze worsened towards the afternoon.

It was also observed that many people were wearing masks when going outdoor.

In fact, sundry shops and convenient stalls have started placing masks at the counter to facilitate consumers buy the breathing protection aid.

Based on the Air Pollutant Index (API) displayed on the Department of Environment portal, two areas in Kuala Lumpur recorded unhealthy API reading namely Batu Muda (136) and Cheras (139) while the reading for Putrajaya was 153.

As at 2pm today, the visibility is at 2,000m despite the current haze, said a spokesman of the airport operator.

“This visibility is recorded by a piece of meteorology equipment placed at each end of the runway, which measures horizontal visibility, which the aviation world terms as runway visual range (RVR).

“The airport authority may decide to suspend the airside operations on the advice of Air Traffic Control (if horizontal visibility drops below 400m,” said a spokesman of MAHB Holdings.

Langkawi International Airport was closed temporarily for over three hours in October 2015 due to haze that resulted in low visibility of only 500m – causing hundreds of passengers to be stranded at the terminal building.

The Civil Aviation Authority (previously known as the Department of Civil Aviation) had said airports in Malaysia are equipped with more modern and sophisticated systems such as the Instrument Landing System and the Surface Movement Radar System that facilitate aircraft landing in a haze.

In Perak, Seri Manjung in Lumut was the first area in the state to record unhealthy air quality at 10am. According to DOE website, the API in Seri Manjung was 123.

All schools in nine districts in Sarawak which were closed yesterday due to haze, have reopened as usual today.

Zulkafli Mohd Ishak, 45, said the haze has become a normal occurrence every year as such the people were no longer bothered by the weather unless it reaches the hazardous level. “I go about my routine as usual but I try not to bring my children out so much.”

Fatimah Abd Kadir, 38, said every time the haze descends, she will reduce outings for herself and her family. “My children aged 13 and 16 are asthmatic like me, and in the past years, they have been warded a few times due to haze.”