In the first week of implementation of the order, which took effect on March 18, police had adopted a gentle approach and merely advised the public to stay at home – but this would be replaced with firmer action, he said.

“If public defiance increases in the second week of the implementation of the MCO, then certainly, in my capacity as Home Minister, I will ask the police to take stern action.

“I want people to be put on notice that we will take firmer action. If we take you (the public) to court to be charged, don’t blame the police because you yourselves have flouted the law.

“Don’t be so stubborn…we are urging you to stay at home. If you need to buy necessities, only one member of a household is allowed to leave home.”

Asked whether the number of police personnel implementing the MCO would increase, he said there were almost 40,000 members of the force on the ground, across the country. The total strength of the force stood at about 130,000 members, with the 40,000 representing some 30% of the force.

Hamzah explained the number of police personnel involved in enforcing the MCO could not be increased because remaining members were needed for other duties.

A total of 695 police reports nationwide have been lodged with regard to violations of the government’s MCO to contain Covid-19. Hamzah said of the total, 28 related to non-compliance of the order, while the rest were still being investigated.

“The numbers prove that there still are individuals who are stubborn… if many remain stubborn, the Covid-19 pandemic will worsen and we may have to resort to other measures,” he said during the Ruang Bicara programme on Bernama TV.

On March 16, Prime Minister Tan Sri Muhyiddin Yassin had announced that the MCO would be enforced from March 18 to 31. Yesterday, he announced the extension of the order until April 14.

Hamzah also said police had opened 94 investigation papers, with six cases referred to the court, while 80 cases were being investigated in connection with the dissemination of fake news on Covid-19.

All those empowered to enforce the MCO imposed by the government to contain Covid-19, can use whatever means required, including force, to ensure compliance, said Minister in the Prime Minister’s Department (Parliament and Law) Datuk Takiyuddin Hassan.

In addition, enforcement personnel can also arrest and detain such individuals until they are sentenced to prison or fined by the courts.

In a statement issued yesterday, he said it was essential that everyone cooperated with enforcement personnel to ensure the measure taken by the government to save lives, was truly effective.

In KUALA TERENGGANU, as a way to protect himself from Covid-19, an engineer was willing to wear a plastic garbage bag on a trip to the supermarket here.

The father of three from Kampung Bukit Payong said the strange looks he gets from other people do not bother him as long as he feels safe when he goes out. 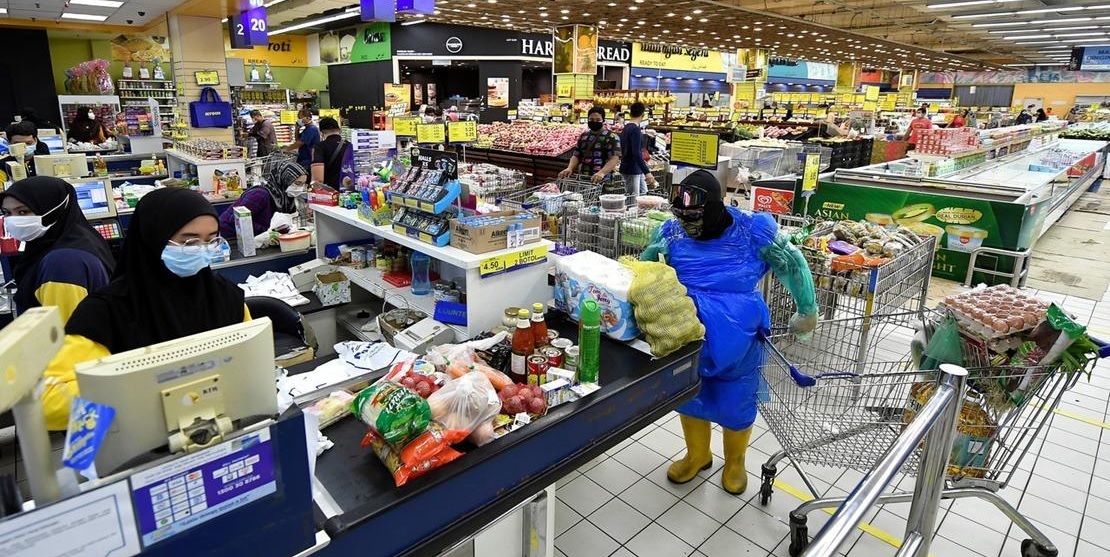 “In the current situation, I do not care what other people think, and in fact, this is a way I remind others about the steps that must be taken to curb the spread of the virus.

“In places like this (supermarket), there is a high potential for the risk of infection, and this is my small way of taking care of the safety of my family and the people around me.”

Zamakhyari said it took him about 10 minutes to put on his outfit, with some help from his children.

He was met on his first day out of the house to buy food and other items, eight days since the MCO was imposed.

At several supermarkets in Kuala Terengganu, it was found many people who had ventured out to buy food and other essential items complied with safety requirements such as social distancing and wearing masks.

There were also many people at the banks and automatic teller machines as civil servants had received their salaries.

As a precautionary measure, the banks and supermarkets also provided hand sanitisers at their entrances and exits for the public.