While Malaysia has seemingly recorded its highest ever Covid-19 death toll with 592 fatalities as of 11.59pm yesterday, Sept 11, according to the Health Ministry’s (MoH) CovidNow website with the 12.30pm update, MoH later tweeted that the actual casualty number is a lot lower at 171, due to adjustments for delayed reporting. Any which way, the latest casualties, which includes 88 brought in dead, brings the nation past another grim milestone with the death toll at 20,419. 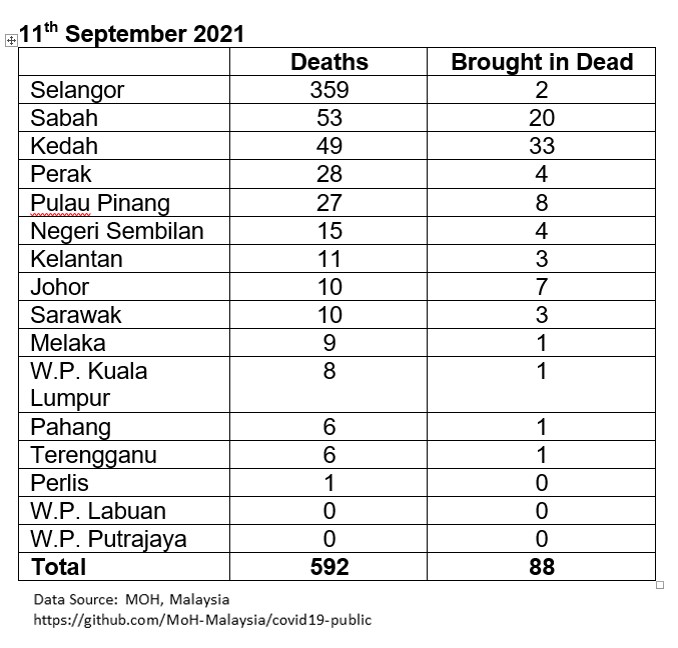 MoH also tweeted that the casualties reported are only those whose death was caused by Covid-19 and excludes those found to have Covid-19 upon death.

Further, it clarified that past casualty figures are being adjusted to reflect actual death dates as MoH admits there had been some delays in the reporting of lives lost to Covid-19.

As for new cases, Health director-general Tan Sri Dr Noor Hisham Abdullah announced there were 19,198 daily additions of Covid-19 infections as at noon today, bringing the nation’s tally to 1,979,698 cases.

Explaining the high number of new cases in Sarawak, the state health director Datuk Dr Mohamed Sapian Mohamed said many of the infections were delayed reporting of up to five days due to the testing labs being overwhelmed. He also clarified that 99.9% had either no or mild symptoms.

There were two Malaysians among the five imported cases, local transmissions involved 17,428 citizens (90.8%) and 1,765 foreigners. Of this total, only 253 patients (1.3%) were hospitalised with inflamed lungs, needing breathing aids or on ventilators.

There was a religious cluster in Pahang (Kampung Kolek Kuantan) among the 34 identified today, together with two high-risk groups in Johor (Jalan Genuang Segamat) and Kelantan (Jalan Pasar Lama Pasir Mas).